“At Amdocs, I’m no longer the only woman in the room,” said Tamar Rapaport-Dagim, but predicts that working remotely during the pandemic will harm women in the long run

TAGS:
Working from home during the pandemic will harm women in the long run, and set them back several decades career-wise, thinks Tamar Rapaport-Dagim, who serves as the number-two executive at Amdocs, as both COO and CFO. The Israeli publicly-traded giant develops a software and services platform for communications, media, and financial services providers as well as digital enterprises. You have served as CFO of Amdocs for 16 years, How come this is your first interview? “I was anxious to preserve my privacy, but have realized that by doing so, I neglected to reach my purpose. One of the goals that we’ve set for ourselves at Amdocs is to incorporate more women who can represent the company at international conferences. A short while ago there was the Next 2021 conference for innovation, and Sarit Assaf, General Manager of Technology was interviewed there, also for the first time. Amdocs CEO Shuky Sheffer doesn’t miss a chance to promote women, and often says to customers: ‘you’re an important customer, so I’m assigning you a female manager to assist you.” 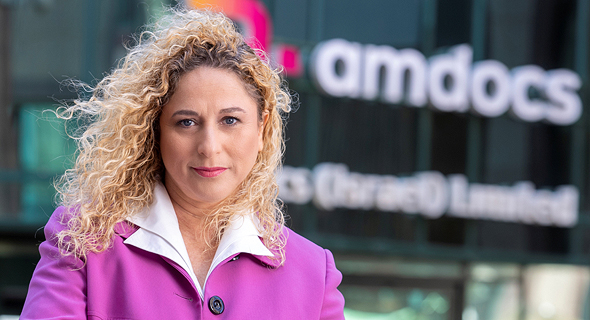 Amdocs CFO Tamar Rapaport-Dagim. Photo: Avigayil Uzi
When did you start to think there was a problem with senior management? Your path to promotion seems to have gone smoothly. “I am a data-driven person. When data is placed before your eyes, showing that only 20% of CFOs at large U.S. companies are women, and the number of female CEOs stands around 7%, you can’t simply say ‘there isn’t a problem.’ It’s undeniable. I see it with my daughters, and also with other women who tell me about it. I believe that if there are two candidates for a position with the same skills and abilities - choose the woman. At the same time, I don’t support placing quotas to be filled by women at any cost. Doing so creates a feeling that someone may have received a position unjustly.” What is Amdocs doing to improve this situation? “We have a database with figures that show at every given time what the percentage of female employees is at every level: according to divisions, management ranks, and more. In addition, during every employee recruitment round we present hiring executives with a report that details their gender record when it comes to things such as how often they’ve raised employees’ salaries, handed out bonuses, and whether they’ve offered promotions, or stock options — you'd be shocked to discover how influential these reports are. They know that we, as the management, are looking at their records. There aren’t any guidelines, but if some type of gender discrimnation emerges, they have to provide explanations to our human resources managers. We hold several panels on unconscious gender discrimination. If among incoming-candidates’ resumes there aren’t enough women, it could already be too late. That’s when we must intervene immediately, otherwise we’ll miss the chance to enact change. Women sometimes need a little push.” What are you personally doing in that regard? “Oftentimes, I sit in front of male candidates and need to explain to them why they aren’t ready for the next position, meanwhile, when I face women in the same situation, I urge them, ‘apply, you deserve it,’ and it works — 43% of personnel at Amdocs is managed by women. It isn’t a trivial number.” Meaning, you are no longer the only woman in the room? “At Amdocs I don’t feel that way. Unfortunately, I do feel it when I’m in external meetings with our investors and global financial institutions. It’s a very male-dominated space. That’s also the case at international CFO conferences. In 2020, only 7% of CEOs of Americann Fortune 500 companies were women.” How many women are on the board of directors at Amdocs? “Currently, we have one woman on the board after another one retired. Another woman will be joining soon.” So few? “We need more, I don’t think that’s the end. What would anger you if you saw it in your daughters’ career path? “A spouse who doesn't support them or their professional decisions. Since they grew up in a home where things were different, it’s difficult for me to believe that they’d accept such a situation. Our motto is: don’t let your environment’s expectations dictate your life.” Have you ever been looked upon in a negative way? “When I first came to a meeting with my daughter’s kindergarten teacher, she told me: ‘Wow, I’m finally meeting you. Here’s the girl’s mother.’ I asked her whether she didn’t remember that my husband had come in for a meeting. That’s when it hit me that when a father comes to parent-teacher meetings, it’s viewed as a sign of something being problematic. It hurt me at first, because it seemed to imply that I wasn’t a good enough mother.” “At Amdocs as well, people gave me strange looks when I arrived at a conference ten days after having given birth. I had my daughter in a sling, I felt fine, so did she. I enjoyed getting out of the house, it was a good experience, but I saw that people raised their eyebrows at me. They probably thought to themselves: ‘She’s crazy, why is she dragging her newborn baby out of the house?’” It is a reminder of Marissa Mayer, the former CEO of Yahoo who refused to take maternity leave and suffered criticism “I understand that there is a matter of providing a personal example, and if it produces a similar expectation from others, then it’s a problem. But a distinction must be made between what is right for her, and what is right for others. Legislation in Israel today prevents a woman from working after giving birth out of fear she’ll be exploited. But I'm prevented from doing so even as a senior executive at a company who desires to work. Why should the state take away my freedom of choice? If I wasn’t able to occupy myself mentally while on maternity leave, I would freak out.” 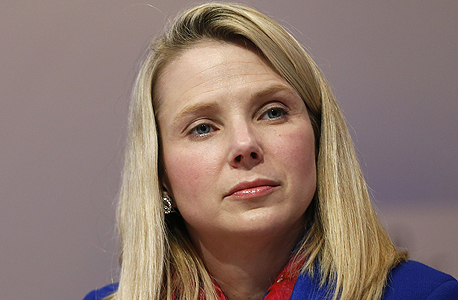 Former-Yahoo CEO Marissa Mayer came under fire after not taking maternity leave. Photo: Bloomberg
“Our investors are satisfied” Solaredge, which develops residential solar panels has been around for 12 years, while Amdocs has been around for 36 and yet Solaredge has an annual net profit of $1.5 billion, the same as Amdocs’. Despite that, the market valuation of Amdocs is close to $10.2 billion while Solaredge is over $15 billion. It’s clear which company is growing, and which is perceived as standing still. “The point isn’t about who has the highest market valuation, rather about how you build a successful company that will survive for decades to come. For better or worse, I was exposed to plenty of estimated valuations during my time at the Emblaze Group. We had a valuation of $4 billion and were piggybacking on the mobile video wave, when the bubble burst. When a publicly-traded company doubles its price based on a pipedream, market volatility could be crazy. Solaredge is being traded at an extremely high projection multiplier. Amdocs’ shares rose 35% this year, and our investors are satisfied. I think we might climb even higher.” You purchased land for a new office campus in Ra'anana for NIS 350 million ($106 million), and then the pandemic hit. Weren't you afraid to touch the “cursed grounds” that drove away giants like Teva Pharmaceuticals and Comverse Technology? “I don’t believe in superstitions. We couldn’t find land that was sufficient for our company, and that’s when the opportunity presented itself, when Teva, then the landowner decided to leave the project. There was economic viability in this decision, and I was convinced this was the right thing to do for the company, economically, and for other reasons as well. Despite the pandemic, I think this was the right thing to do since it’s a decision that will last for decades to come, not only for a few years. We have also considered possibilities of leasing the space to other companies as needed.” “The new campus won’t be a white elephant”

So you’re stuck with a large expensive campus, which your company plans to move in to in 2022, just as the world is transitioning to a hybrid work model.

“Prior to the pandemic, we transitioned employees to work one day a week from home, so I don’t think that we’re ‘stuck’ with this new campus. We are currently examining our model’s accuracy. We’ll be leasing areas, and are still considering what our work patterns will be like. If employees don’t come to the office every day, will they still require set work spaces? The office complex won’t become a ‘white elephant.’ Since the end of the lockdown, 20% of employees have already returned to our offices. We are seeing people thirsty for social interactions. People want those interactions, albeit with flexibility.” 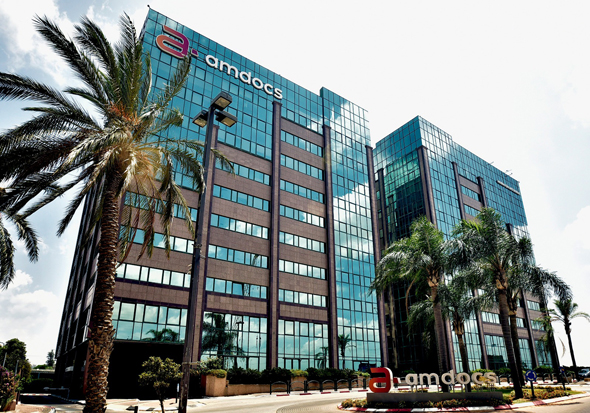 Amdocs' new offices in Ra'anana
When will you announce your post-coronavirus policy? And why not leave the decision on how to work part-time out of the office up to employees? “It won’t be completely voluntary for employees, but there will be flexibility. A physical workplace environment creates capabilities that are hard to duplicate while working remotely. We are examining what other companies are doing as well. The model adopted by LivePerson, who had all their employees work from home, certainly won’t happen in our case. How do you connect with people at your company emotionally when they’re working remotely? Where is the emotional connection? A picture of your boss on a screen? What happened to asking a colleague in the hall what their kids dressed up as over the Purim holiday? That entire dynamic of working in a team in the long term could be harmed, and it could also harm women’s integration into the workforce.” Why? “Staying home puts women back in the traditional role of ‘caregiver.’ Some think that work from home is good, since it provides women with more flexibility, but I think the exact opposite is true. Women are already less apt to offer their opinions when working remotely. All the routine problems tend to escalate. I support having flexibility and the ability to maneuver for the sake of your family, but I oppose the absolute solution of working from home. It sets the female workforce back several years.” You came to Amdocs from the world of financial management. Isn’t it frustrating to view the world through an Excel spreadsheet? “For a long time I've been in charge of other things aside from the money flow, otherwise I wouldn’t have stayed in this position for so long, because it would be too limiting. Today, I’m in charge of human resources, operations, and legal, but the real question is how all these reports and the information they provide can influence the company’s decisions and allow me to be a compass to guide the company and give it advice on what to do, not just say ‘there’s a problem, move 30 degrees to the right.’” Today, you’re the company’s number-two. Will competing for the leadership be on your agenda? “It could very well be. I am driven by what interests me. A title doesn’t define what you actually do. There are CEOs who have directors who are like managers, and don’t actually lead a company. There are situations where you can be influential, and not necessarily be the CEO. I feel a real partnership here as CFO at Amdocs. To be able to say that I’m ‘number one’ doesn’t really do it for me.”