“There's no reason to wait for anything; you can always do the things that you want to do”

The path to entrepreneurship rarely follows a linear trajectory, and Yali Saar, co-founder of Raising the Bar and Tailor Brands, truly embodies this notion. Saar explored numerous fields before catching the entrepreneurial bug, including acting, journalism, and politics. After traveling to the United States for school, Saar wanted to give more to his community and founded Raising the Bar, a nonprofit that increases excitement around education. As Saar explains, there are numerous educational opportunities people can take advantage of and knowing that they exist is a huge first step. More recently, Saar made the transition to the tech sphere and established Tailor Brands, a platform that helps business owners turn their ideas into reality. In an interview with 20MinuteLeaders creator Michael Matias, Saar emphasizes that trying and failing is oftentimes the best way for founders to achieve success.

Yali, take me back in time a little bit. Who is Yali Saar, and how do you end up running a multimillion-dollar startup in Tel Aviv?

I'll take you back to the start. I have a bit of a different background. I was an actor here in Tel Aviv. I did television, a lot of children’s TV. Then, I found my way into journalism and spent some time as a political spokesperson and actually ended up in marketing. I moved to the States to study at Columbia and opened up a nonprofit there.

How do you go from being a child TV star to journalism, politics, and creating a nonprofit for education?

I think a lot of the things that have happened to me throughout the years kind of just happened. Initially, I didn’t think acting would be a thing for me, but then one day, I was walking up the street and someone said, "Do you want to come to an audition?" Obviously, I didn't think I would end up in a basement somewhere, so I said, "Sure, why not?" I went to this audition, which was an audition for a theater show for one of the national theaters here in Israel. So, I started doing that when I was about 13 or 14. From there, I went into children’s TV and did a couple of shows. The last TV show I did before I completely stopped was called "Alifim," and it's still running today thanks to VOD. I had been acting for quite a long time and eventually realized that it may not be what I want to do in life, so when I went into the army, I applied to a program for military journalists. I started writing at a magazine called Time Out just before the Army service. I was the youngest writer there at the time, so young they made me use a fictional name. So I did that, went into the army, and started doing correspondence in conflict situations. It was really complicated stuff, but it got me thinking and helped me understand the reality that we were living in.

The minute I finished with my service, I got an offer to join a political campaign as a spokesperson. I joined the team, but we lost. After that, I knew I wanted to go to school in the States. I thought I was going to study something in the field of arts or management. I did one semester at Parsons, then I realized that I wanted to try something that was a bit more challenging for me, and I managed to get a scholarship and transferred to Columbia. The campus was a beautiful city within a city, and people could actually walk into a lot of the classes for free. But none of the people in the neighborhood did, so I started this organization called Raising the Bar. The idea was to get top tier professors and people to speak to big groups and one on one and increase excitement about education and coming to school. A lot of the advanced degrees in the US have scholarship opportunities, but if you don't come from the right background, you may not think that you have a chance to do it. This is exactly what we wanted people to understand.

Why did you start a nonprofit for education?

I'll give you the short reason and the long reason. The short reason is I'm hyperactive and I always need to do stuff. The longer and more appropriate answer is that I remember meeting with a career consultant to discuss what I should major in. She asked me, "What do you want to do?" and I looked at her and said, “What I want to do has nothing to do with what I want to study.” Then it kind of hit me: I can do what I want to do right away. There's really no reason to wait for anything. So that was how we opened up Raising the Bar, and luckily for us, it went really well. I think after a year, we started opening up more branches. We all have amazing brains and can conjure up the most brilliant ideas, but usually they just die out on paper or stay in the back of our heads. I’ve realized the only real difference between having an idea die on paper or actually doing something with it is not being afraid to fail. I think that's the main thing that pushes me. My dad used to tell me, "You can try a thousand different things, and you might fail 50% of the time, but you still made 500 things happen." Or you can debate yourself for years whether to do this or that, and you end up shooting out two ideas. You might have a better chance of succeeding 100% with these ideas, but you still only get two things up and running. The worst thing that can happen is that you fail, so you’re going to get up and try again. 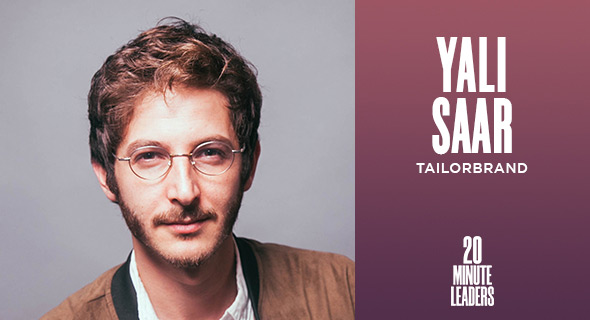 Talk to me a little bit about Tailor Brands and some of your thought processes as the leader of that amazing group.

We have a lot of privilege working at Tailor Brands. Today, Tailor supports over 20 million businesses worldwide, but initially, we helped companies create a logo. I have two amazing co-founders, Nadav and Tom, and we thought of creating an algorithm that could mimic this type of creative task. I was coming from the world of copywriting, Tom came from the world of design, and Nadav had a technical background. The thought was to create an algorithm that could mimic the thinking process that went on in Tom's head. So we did that, and we worked with businesses to create logos for them automatically. However, what we realized was that even after founders had the logo, their businesses were not up and running. So we started thinking about creating a platform that truly was a one-stop SMB shop. How can we take businesses by the hand and help them make sure that their idea doesn't stay on paper?

What were some of the most difficult challenges in the process?

One of the things that we love at Tailor is A/B testing. We probably have hundreds of A/B tests up and running every single moment, and one of the things that you realize when you do A/B tests is that some of the insights that you have from prior experiences don't mean anything when you're trying something new. When you're starting anything, you want to have intention and you want to be able to do something that really excites you and that is bringing something to the world. When we started Tailor, we really had no experience in the tech world, so our mentality was all about try, fail, repeat, try, fail, repeat until we managed to get some sort of success. I think that one of the things that I’ve learned along the way is that bringing experience to your team is often the best way to avoid failures. You might be super smart and know the thing that you’re doing the best, but that shouldn't stop you from bringing in people with experience. At the same time, you need to give everyone on the team, regardless of their experience, an equal voice. This is often the best way to innovate and find success. At Tailor, my voice counts just as much as anyone else on the team because title and experience doesn’t increase the chances of you being right.

What are three words that you would use to describe yourself?

"It's not necessarily financial value. It's really value to the world.”
Recommended videos