“Vision without execution is actually not going to be a great way to succeed.”

Aliza Peleg, who helped found Better Place, speaks to Michael Matias and shares her insights as a board member for several companies

TAGS:
A great story is important for companies to get people on board with their ideas and products, but Aliza Peleg, who has held a variety of tech executive roles, warns that founders can get carried away by the success of those stories. Sometimes the storytelling is misleading when you look at the gap between the vision and the execution. But Peleg also values the courage to try things that may result in negative ramifications. She helped found Better Place, an EV battery-swap and charging startup that ended up crashing. She credits the founder with really pushing the industry and says their team made huge progress, resulting in a change in the market even after the company’s demise. She now shares her insights as a board member for several companies.

Why are you attracted to visionary companies?

I am really attracted to visionaries, but I’m not a visionary. My strengths have always been around execution and operation and progress and connecting the organization and grounding the organization to the founder’s vision. And I found myself teaming up with entrepreneurs that have a phenomenal vision but don't necessarily know how to connect that vision into day to day execution by a team that's focused, that's functioning, and that allows them to really and truly realize their vision. And vision without execution is actually not going to be a great way to succeed.

What is the role of the chief operating officer within both a small startup and a larger organization?

Before I go into the details, I want to explain: It wasn’t only that I necessarily chose that role or understood my strengths early on. I think I demonstrated them early on and entrepreneurs discovered that in me and pulled me into it. My role is to try and get the machinery going, really to try and get a rhythm, that there's a rhythm of planning and executing and measuring, learning from it, moving on, planning again, executing, measuring, and learning. So, it's something to keep the organization accountable: we know what we're doing, and we’re doing whatever we said we would do, and then we move on. And it’s also having the ability to get that into some kind of a spirit without being too bureaucratic, without being too slow. But if you don't measure and if you don't really understand and if you don't learn, you can get off track really quickly and sort of forget where you started. And sometimes the vision is so far out and you have to ensure it’s in alignment. But it is okay to pivot, it's okay to change, it's okay to go in a zigzag. But I believe in conscious zigzag and proactive zigzag versus reactive.

Do you see a big difference between the chief operating officer of a startup and that of a large company?

There are distinctions. However, I haven’t been a COO in large companies. I was more of a GM or a managing director of a big unit, so that was more of an overall business leadership role. In NICE, I managed the $200 million line of business. At SAP, I was the managing director of SAP Labs in the U.S., which was the largest lab outside of Germany. And I also led the lab network, which was seven labs outside of Germany, so that's an operating role, but it's not the COO. 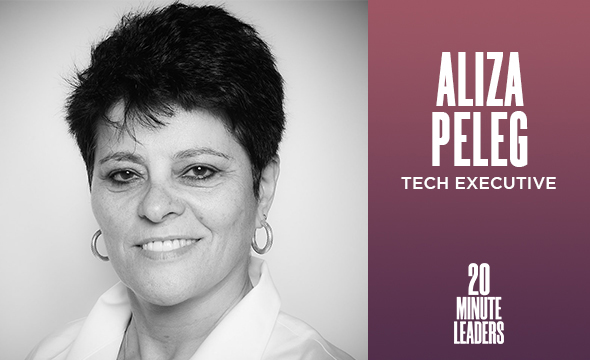 In the startup world, it depends. It's not appropriate for a startup to have a COO in its early stages, you know, when they’re still figuring out their product and when they’re still breaking things. But if either the CEO or the founding team begins to understand, “We need to start thinking about our go-to-market, we need to think about hiring, we need to think about culture, we need to think about processes,” and if they have that kind of talent, then there's no need for a COO at that point. But when you feel one guy is the architect and the other guy is the head of the development, and one guy can sort of talk to investors, and everything else is falling apart in the process, in the machinery, in the hiring, in the HR, in finance, then you start thinking about if there is a person who can aggregate all this stuff together and run it. The more functions you have depends on the composition and the talent of the founders.

Talk to me a little bit about Better Place.

It was a phenomenal experience. Unfortunately, it crashed badly. I ran a small case study at Stanford for five years about the rise and fall of Better Place. But Shai Agassi, the founder, is an incredible leader and a phenomenal visionary. I would say he probably single-handedly pushed the industry to a point that that's why we see so many EVs around the world. The system didn’t work, the changes didn't work, we made a lot of mistakes, and the vision wasn't 100% right. But Shai in his confidence, in his arrogance, in his lack of humility, walked into the heads of all the automakers and said, "If you don't do EVs, you're going to die." In 2007, we went to the Frankfurt Auto Show, and there wasn't one EV on the floor or even a prototype or even a demo car, nothing. By 2010 or 2011, there wasn't a manufacturer in the entire world that didn't have an EV story or an EV platform or an EV strategy or something. Early on, no one spoke about mass consumption, mass-scale, but Shai believed that that could happen.

In Better Place, we had a head of operations from day one because that was a huge undertaking. It was obvious that Shai would be outbound, focusing on governments, financing, regulations, big outbound activities. He would have zero attention to the company and less capability. So we started by building the team from scratch because we knew how incredibly difficult it would be: the product was complicated, from software and hardware, and batteries, and all the physics and all hardware capabilities. We also had to think about go-to-market, the global expansion, the regulations, managing the finance, managing the people, and making the legalities right.

Tell me about being a part of this team that is educating the market, educating governments, and going against the grain at a time where no other manufacturing company in Frankfurt is showing any interest in it. What is that like?

Well, it was great, it was tough, it was excruciatingly difficult, but it was also rewarding. But it also had its challenges, which eventually led to, I believe, our demise. The gap between our vision and execution was widening, instead of closing. Also, the gap between the story you tell others and the story you tell yourself. That gap was huge. We raised a lot of money and because there were true phenomenal believers behind it, we could tell a great story. And you need a story to drag people, governments, countries, and we had that. We had the money, and we had good storytellers, and I think that creates very positive momentum. So, in the beginning, the momentum and the motivation is just coming from the success of the stories. There are so many people listening and so many people buying into it, so it's misleading sometimes. You get carried away. You drink your own Kool-Aid, which is a problem in and of itself. But that’s how you get going and create a positive cycle of telling the story.

We also hired phenomenal people. And our team in Israel, which was led by (Moshe) Kaplinsky, was amazing. There were a lot of successes and huge progresses in certain domains that helped us believe that we were making great progress. But with such a company, the chain is huge, and there are many links in the chain, and you're only as strong as your weakest link. And the fact that some links were missing didn’t help the story, and that takes time to figure out. And unfortunately, at some point, I did feel that I couldn't contribute anymore and couldn’t fulfill my role as I should, so I decided to leave.

Which three words would you use to describe yourself?

Integrity and authenticity. I really speak my mind and I walk my talk. Courage: it’s my confidence and belief in doing the right thing regardless of the ramifications.