Blockchain is making its mark in sports, and there’s more to come

The Covid-19 pandemic created an urgency to adopt new technologies that didn't previously exist in much of the sports world, including blockchain, says Head of Innovation Development at Infront Lab, Itamar Melamed

TAGS:
Blockchain technology has been a contentious topic in the tech world for almost a decade now. But while the proponents and detractors argue about its merits, blockchain is quietly gaining traction in many sectors, and sports is a major one of them. One company promoting blockchain solutions in sports is Infront, a leading provider of business services to sport organizations, doing so via its new innovation laboratory in Israel. The Switzerland-based company, which was acquired by Wanda in 2015 and is traded on Nasdaq under Wanda Sport (WSG), provides business and technological services to broadcasters, global sports brands, leagues, and more. "I think that when we talk about blockchain, we immediately fully gravitate our thoughts to Bitcoin, but Bitcoin is only one application of blockchain," Itamar Melamed, Head of Innovation Development at Infront Lab, told CTech. "Blockchain is the backend of the entire ecosystem of cryptocurrencies, but blockchain has several unique capabilities that the sports market could harness and utilize. First and foremost it can almost completely eliminate what's called double-spending. This is a very big problem in sports when it comes to forgeries." 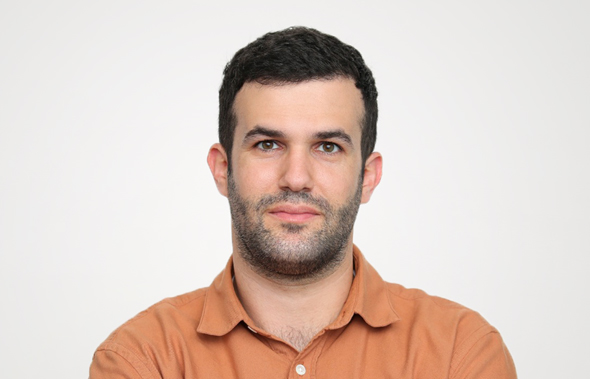 Itamar Melamed, Head of Innovation Development at Infront Lab. Photo: Eyal Merilos
Melamed explained that this is particularly prevalent when it comes to ticketing and memorabilia. "Scalpers make billions. The estimates are upwards of $40 billion a year. This is a huge market, and there are a lot of problems with it. Firstly, when you buy a ticket from a scalper, you have no guarantee that it is genuine. So there's a lot of occasions when people buy the ticket, they look identical, but when they come to the gate at the venue they are told it isn't an official ticket and they can't enter," said Melamed. "You can spend thousands of dollars on a piece of paper that's worth nothing. How can blockchain solve this? Well, blockchain makes the entire supply chain transparent. So you can see who's the issuer of the ticket. Once you have a ticket, you can basically ensure that this ticket was indeed issued by let's say, FIFA or Maccabi Tel Aviv. Secondly, the prices of tickets fluctuate. They can be sold for a hundred times more than their face value. So this becomes a black market. This can be solved with a smart contract on a blockchain that can be used to set a price limit. So you can limit the price to $500 for example and can also include a smart contract which dictates that the rights holders will also get a cut from the increase in price." Infront employs more than 1,000 people in 16 countries and works with FIFA, UEFA, FIBA, and others. The company provides media, production, sponsorship, and other services, generating revenues approaching $900 million a year. In recent years, the company has also invested resources in developing technologies and startups in the field of sportstech, leading to the founding of Infront Lab, which it chose to base in Israel. "The company provides the entirety of what we call the commercial envelope for sports organizations," said Melamed. "So basically everything other than the professional aspect of the team. This revolves around four main verticals. The first one is production. We produce the events themselves, the entire operation. Secondly, we produce the broadcast, the feed. The video comes from us, from our subsidiary company. Thirdly, we deal with media rights. So we buy and we sell media rights. That could be TV rights or that could be merchandise. Last but not least, we provide a lot of digital services. That could be everything from setting up an app or a website to running a campaign. We work with more than 200 worldwide known organizations, from world governing bodies, like FIFA or FIBA, on to local associations and actual clubs." Infront Lab is focused on several different technologies, including AI and machine learning, as it aims to provide the most advanced solutions for its clients. "Infront is very focused around content. We have partnerships with several content creation tools that help organizations generate content of higher quality and better personalization," said Melamed.

The Covid-19 pandemic created an urgency to adopt new technologies that didn't previously exist in much of the sports world, with associations, leagues and clubs understanding that they would be left behind if they didn't move forward with the times. "The sports world as a whole is pretty traditional. It usually evolves at a steady, but pretty slow pace. I think that Covid-19 did to the sports business what it did for a lot of startup companies. It basically put the pace of evolution on steroids. It forced the sports organizations worldwide to rethink their strategy and their innovation and digital division," explained Melamed. "All of a sudden, one of their main revenue streams, in-venue fans, was gone. All of a sudden we were bombarded with organizations asking us, 'Hey, how can we innovate? How can we bring excitement to the fans while they're at home? How can we bring the sponsors to the fans sitting in front of the TV?' This has created a substantial paradigm shift. Even disregarding the pandemic, if you think about it, a lot of attention is focused on the venue itself, but let's take FC Barcelona as an example, they might have 100,000 fans in the stadium, but a hundred times more and maybe even a thousand times more across the world. How can you generate revenue streams from these fans? This is something that organizations have now grown to understand. They realize that they can create more revenues from the fans outside the venue, that they can interact with them, that they can cater to them with better experiences that can be provided with an implementation of technologies."

Michael Jordan. Photo: AP
One company that has used blockchain's properties to its advantage and made a big splash over recent months is Dapper Labs. The company behind NBA Top Shot announced last week a $305 million funding round at a $2.6 billion valuation, with several high-profile investors taking part, including Michael Jordan and Kevin Durant. Dapper Labs constructed the Flow blockchain for the Top Shot non-fungible tokens (NFTs), generating over $230 million in sales so far. "NBA Top Shot is one of the best demonstrations we’ve seen of how quickly new technology can change the landscape for media and sports fans,” Durant, who is involved through his company Thirty Five Ventures, said in a release. "I think this is a great example because the user doesn't see the blockchain," said Melamed. "They don't get into all the problems of blockchain, things like a cold wallet, hot wallet, public key, private key, etc. When you're using NBA Top Shot, you are blind to that. You're basically ambivalent to it. "They changed the world of trading cards from being a two-dimensional world to basically being a fully digital one, with three and even four dimensions," added Melamed. "It allows fans to get way more immersed into that moment. At the end of the day, sports is all about those moments. We all love sports because of the one in a million shot that no one saw going in. This is what makes sports events seven out of the 10 most viewed moments in history."