Database software developer Redis Labs Inc. announced on Wednesday that it has completed a $110 million series G round, taking the company's valuation to more than $2 billion. The round was led by new investor, Tiger Global, and also included participation of another new investor in Softbank’s Vision Fund 2, as well as from existing investor TCV. Additionally, Tiger, SoftBank, and TCV acquired additional ownership as part of a $200 million secondary transaction.

"In this current round some early investors sold their holdings," Redis CEO Ofer Bengal told Calcalist. "We have angel investors that invested in the company when it was valued at $5 million and for them this is an exit in which they will be making 20 and 30 times their money. Everyone held on to some of their holdings and no one sold all their shares." 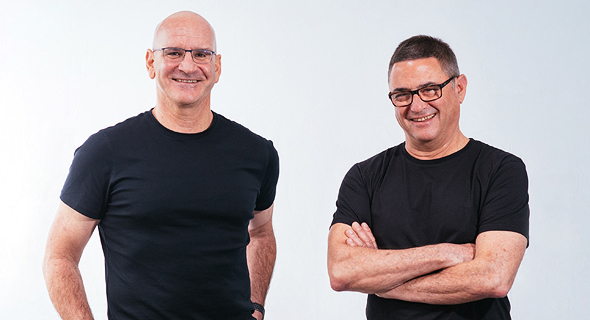 Redis Labs co-founders Ofer Bengal (right) and Yiftach Shoolman. Photo: Amir Yaakobi
Founded in 2011 by Bengal (CEO) and Yiftach Shoolman (CTO), Redis Labs has now raised a net amount of $347 million and will continue to invest in expanding the company’s global footprint and advancing its market-leading real-time data platform. The company employs 500 people worldwide and plans to recruit another 200 new employees this year, half of which are set to join Redis' R&D center in Israel, which currently numbers 150 employees. The company’s existing investors include Bain Capital Ventures, Francisco Partners, Goldman Sachs Growth, Viola Ventures, TCV, and Dell Technologies Capital. Bengal told Calcalist that Redis decided against going public, either via a traditional IPO or a SPAC, despite some lucrative offers. "There was a big demand from many investors and one of the reasons we chose the ones we did is that these are players that will also participate in an IPO and will remain onboard afterward and these are the types of investors you want to work with," added Bengal. "We received offers to do a SPAC and go public, but it is still too early for us, which is why we decided to embark on this funding round. In our sector the name of the game is to grow quickly and companies from our sector are rewarded by the market for accelerated growth and that is the route we are taking. We are burning a lot of money right now and that is preventing us from being profitable and when you are a public company you have to be very cautious about that. I want to continue and grow as a private company and we will go public next year if market conditions are good. If the market cools off we might wait a bit with going public as we have enough money and the ability to wait, raising $110 million just six months ago and now another $100 million. We have $230 million in our account and have the luxury of deciding when to go public," said Bengal. "$100 million isn't a big investment for our new investors and they were looking to invest more. But because we didn't want to dilute the shares too much we decided that this was enough money."

Redis reported that it experienced revenue growth of over 54% (CAGR) over the three years ending in January 2021, with more than 8,000 paying customers, including 31% of the Fortune 100. The company said it has a net retention rate greater than 120% and has built joint go-to-market programs for Redis Enterprise Cloud with AWS, Google Cloud, and Microsoft Azure, which includes the general availability of Redis Enterprise-powered tiers on Azure Cache for Redis.

Bengal spoke of the significance of the identity of the leading investors in the new round. "It is true that Softbank suffered a serious blow in the entire WeWork saga, but this is a massive fund which has wonderful companies and has invested in some of the leading companies in the U.S.," said Bengal. "Tiger were the ones who led the round and we considered them a good partner due to their connections in the Far East, in particular in Japan and China, markets which we plan to enter and in which they can help us a lot. None of the investors has a controlling share and we saw no problem in raising money from them." "We founded Redis Labs with the idea that the future of the database market would be defined by performance, where Redis excels," Bengal added. "Through the dedication of our team, Redis has become an enterprise-grade data platform to tackle nearly any real-time use case across every industry.” “Companies are increasingly looking for ways to leverage the efficiency and flexibility of the cloud to drive their business forward and Redis Labs is the best partner for them in this journey,” said John Curtius, Partner at Tiger Global Management. “Redis Labs has developed a real-time data platform to solve for low-latency requirements of business-critical applications and the go-to-market strategy to succeed alongside the cloud hyperscalers.” “As workloads increasingly move to the cloud, we believe Redis Labs is a leader who is transforming the database market. With a strong foundation with developers and in AI applications, Redis has become a critical component for global enterprises to compete in the digital economy,'' said Vikas Parekh, Partner at SoftBank Investment Advisers. “We’re excited to partner with the Redis Labs team and support their ambition to lead the transition to the real-time economy.”