TAGS:
If given the opportunity, Israel’s next astronaut would probably abstain from calling himself a hero, but in February 2022 upon his take off from Cape Canaveral in Florida with three other astronauts, he will make history for an entire tiny yet powerful nation. Eytan Stibbe (62) is slated to be the State of Israel’s next astronaut and has an impressive career path behind him. Ahead of his announcement of the 44 Israeli experiments which he will take with him to the International Space Station that was unveiled on Wednesday, he spoke to the media for the first time after months of quiet and shared his thoughts about space exploration, science, and his upcoming mission. Stibbe served in the Israeli Air Force for many years and in one particularly daring mission shot down four Syrian enemy aircraft. He’s also founded his own venture capital firm, Vital Capital, which is involved in building infrastructure in impoverished underserved communities in Africa. A former colleague of fallen-first Israeli astronaut Ilan Ramon, he knew the Ramon family well and helped co-found the Ramon Foundation to commemorate the Ramon family, and to which he will be dedicating his time aboard the space station in the areas of science and education. Stibbe, who will be a private astronaut, is married to Ora and they have three children. 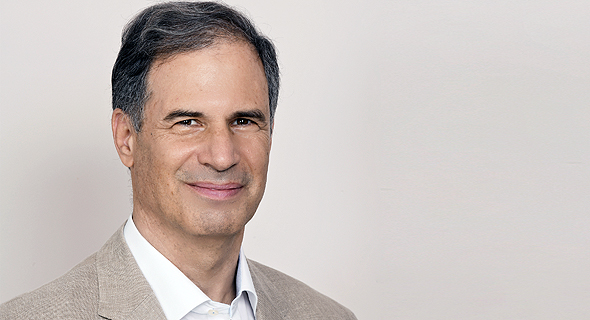 Israel's next astronaut Eytan Stibbe. Photo: PR
“I think the advantage of being a private astronaut is that it can open the door to others who aren’t in obvious scientific sectors. When you look at the ISS, you see a big laboratory where you can conduct many experiments, but psychologists, philosophers, artists, and others aren’t invited to this exclusive club. I want that to change. Space is for everyone,” Stibbe told CTech’s Yafit Ovadia. Stibbe recalled watching the first man land on the moon as a child, and how the entire world came to a halt. He noted that meeting Ilan Ramon changed his perspective on space forever. “I met Ilan in 1991, he was the commander of my squad when I was in the reserves. We became really good friends, and when he was appointed by the Israel Space Agency to become an astronaut, I visited him at the Johnson Center in Houston. He showed me the facilities, including the mock-up and simulator of the Columbia shuttle, and the pool where they train for space walks too. Suddenly, I understood what most American kids know: space is accessible. It’s real. People sign up to become astronauts, they train for several years, then they go up and come back down, and go again. It’s possible, but I didn’t expect it to become possible for me. My wife Ora and I stayed good friends with Ilan’s family, and were there at his launch. I also stayed in close contact with astronauts who come annually to Israel for Ilan’s memorial, during Israeli Space Week. After Asaf was killed, along with Ilan’s wife Rona, we founded the Ramon Foundation to grow the sector here and help spur education, inspire kids to think big, believe in their dreams, and know that they can come true.” How did you reach the decision to go to space? “It was an instinctive reaction to a question. An astronaut, Garrett Reisman, who is a good friend of mine, worked on SpaceX’s design of the Dragon capsule. I called to congratulate him after the project had a successful first landing back in June. He said to me ‘you know people can go to space, and I said: Okay well, people have been going to space for 60 years so what’s so impressive about that? He asked me: So then are you coming? I said: Yes!’ And after that, it began to hit me what that really means, how long the mission will take, but I was ready. The moment the opportunity presented itself, I knew that I would go for it.” How did your most recent Florida trip impress upon you the gravity and importance of your upcoming mission?

“When you visit the U.S. space industry, you see that it’s real. They’re building missiles, refreshing the Falcon 9 rocket. They’re all paperless facilities with people working on computers, and it’s very professional, and focused on success and the mission. We were hosted by Bob Cabana, who’s the director of the John F. Kennedy Space Center. He told us about his experiences in space, and it became real. I think that American kids see it differently than Israeli kids do. They know it’s possible, and that the country is invested in it. In Israel, that is not so. I see the excitement on Israeli kids’ faces when I speak to them or visit schools. They have the most intelligent and surprising questions that you can think of,” he said. 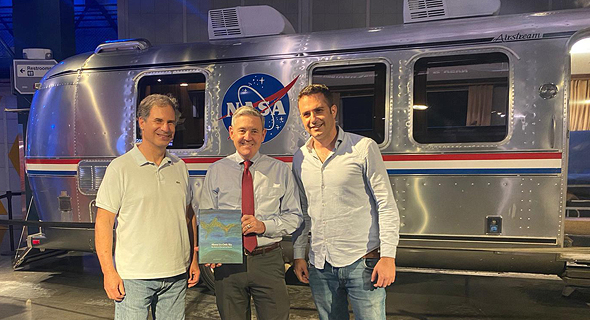 Stibbe (left) and Ran Livne (right) meet with Bob Cabana of NASA (center). Photo: PR
What will constitute the next phases of your training? What are your thoughts on that? “The entire crew has met up once. In November, we visited SpaceX’s Florida facility, where engineers recorded our body measurements for the suits, and the seats. Every two weeks since then, we have a group Zoom call where we discuss everything from what type of toothpaste that we’ll use onboard to our actual physical training. In two weeks, we’ll be starting our centrifuge training or zero-gravity training. That’s not so exciting for me personally, because I know G - G is a good friend of mine,” he quipped. “In June, we’ll have one week of an outdoor training excursion in Alaska, where we’ll be outdoors for one week with no phones or service. To remind you, we’re not a young crew. Then there’s some initial crew training in August at SpaceX, and from October until the launch there will be full-time training at the Johnson Space Center, with visits to Japan, Russia, and Europe to see their facilities, simulators, and help us get acquainted with their segments of the space station.” Do you think there will be other Israeli astronauts after you? Private ones or through the ISA? “I’m sure there will be more, and that there will be women too, as well as scientists and physicians. The trend of privatization - which Elon Musk is leading - is everywhere. AxiomSpace is building a space hotel, and BlueOrigins is spearheading space tourism. There are so many technologies from space food to nutrition, water, solar panels, and more. I’m sure that the Israeli science industry and researchers will be a part of this industry, although I don’t know whether we will build spacecraft that will go to Mars.” What types of experiments will you conduct? Do you need to undergo special training for them? “I plan to understand all of the experiments I will perform, but some are autonomous and just need to be plugged into electricity, and function on their own. Some are interactive, and I must operate them, check results, and change their calibrations. Others are physiological examinations, psychological tests, brain tests, and more. I think about half of my time onboard will be devoted to science experiments, while the other half will be devoted to giving lessons to Israeli school children in physics in Hebrew, which is part of an initiative that the Ramon Foundation and the Ministry of Science and Technology are hosting.” 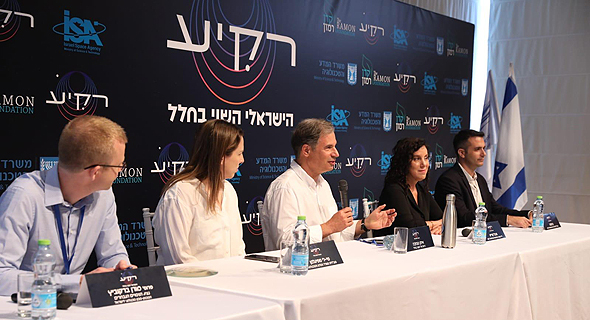 Stibbe (center) speaks to the media during a panel announcing the chosen experiments on Wednesday. Photo: PR
During Israeli Space Week, you mentioned your background in impact investing and venture capital which you compared to the UN’s Sustainable Development Goals. How has investing - and venture capital in particular - helped you better understand the commercial space industry? “I think we are launching an initiative that will be completely new, and like in impact investing, it will measure the impact of my space mission on humanity. Our impact won’t only be on the space industry, or a certain sector of technology such as medicine or foodtech, it will also inspire children to pursue STEM fields, or artists to be inspired by space exploration, and life on other planets.” “In Africa, lots of industries have not developed yet, so infrastructure, urban development, and agriculture can develop from scratch - in a healthy ecological way. You can design a city as it should be - and make it entirely green, using solar energy, treating the water, sewage, even making more public open spaces and bicycle paths. Things can be done properly from scratch, and that’s a great opportunity that I hope African leaders will take advantage of. I think that understanding those goals, and the UN’s goals will be important for helping me focus on my mission tasks - is improving people’s lives through science.” “As for the experiments, I can say that from the Israeli side, it is quite impressive compared to my counterparts, but we will all be working together and helping one another with these experiments.” Israeli space tech startups are growing. As a venture capitalist, what trends do you predict in this field? Are there certain sectors that you expect to grow more or less? “I can’t really provide a proper forecast since it’s still too early. Everyday, I learn more about the industry. Yesterday, I visited Aleph Farm’s facility that produces meat out of cow cells. Instead of taking a cow to Mars and making food out of it which would be quite difficult” he joked, “they’re using a small amount of cells to grow the meat in a lab. I am acquainting myself with all of the initiatives, and will have a more well-rounded perspective soon.” Are there any lessons you learned from your military service that are applicable to this mission? “I would say I’ve learned two main lessons, one is cooperation, the second would be practice makes perfect. You accomplish much more by cooperating and working together. The fact that we, as private astronauts, agreed to work together and spend a week outdoors in the wilderness getting to know one another in non-optimal conditions speaks volumes about our devotion to the mission. I hope we’ll have a chance to meet the other astronauts who will be onboard the ISS at the time when we’ll be there.” Do you know who will be there? “No, we don’t know who will be there yet. It’s February of next year, so we don’t know who exactly those astronauts will be, it’s not confirmed yet. I hope we will have a chance to meet them on Earth, somewhere in Houston maybe before they go up so we can get acquainted prior, because we’ll be living in quite cramped quarters.” It’s a tight fitting space. “So cooperation is critical. The second lesson I learned would be to practice what you intend to actually do. You have to be authentic when you train, and when you are expected to do something, you must be ready for that.” What is your message for Israelis and people around the world watching? “This will be a great experience, and my intention is to involve as many people as possible, whether those be Israelis, North American Jews, kids around the world, and even people in Africa, where my impact investing company, Vital Capital, has been heavily involved in investing in infrastructure there. I have several contacts in Africa, who are also fascinated with space and I hope this will inspire them. I don’t think we’ve had an African astronaut yet, so I hope that will happen as well.” 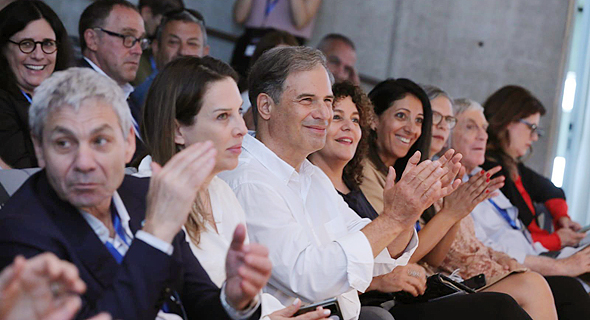 Stibbe (center) and his wife Ora (right) attend the official announcement on Wednesday. Photo: PR
What are you most excited for? What is driving you? “I think the excitement, and that first experience of floating in zero gravity will be exciting. And, of course, the big excitement in Israel which I feel is pushing me forward.” You’re a pioneer for an entire country, it’s a heavy weight to carry on your shoulders but it’s important. He laughs. “Yes, but the personal experience and aspect is also very exciting.”