Israeli leaders said they were pressing on with an offensive to destroy the capabilities of the armed factions Hamas and Islamic Jihad, amid calls by the United States and other world powers for an end to the conflict

TAGS:
Israel bombarded Gaza with air strikes and Palestinian militants resumed cross-border rocket fire on Tuesday after a brief overnight lull during which the U.N. sent a small fuel convoy into the enclave, where it says 52,000 people are now displaced. Israeli leaders said they were pressing on with an offensive to destroy the capabilities of the armed factions Hamas and Islamic Jihad, amid calls by the United States and other world powers for an end to the conflict. Two Thai workers were killed and seven people were wounded in a rocket strike on an Israeli farm just over the Gaza border, police said. Gaza's ruling Hamas Islamist group and Islamic Jihad claimed responsibility. 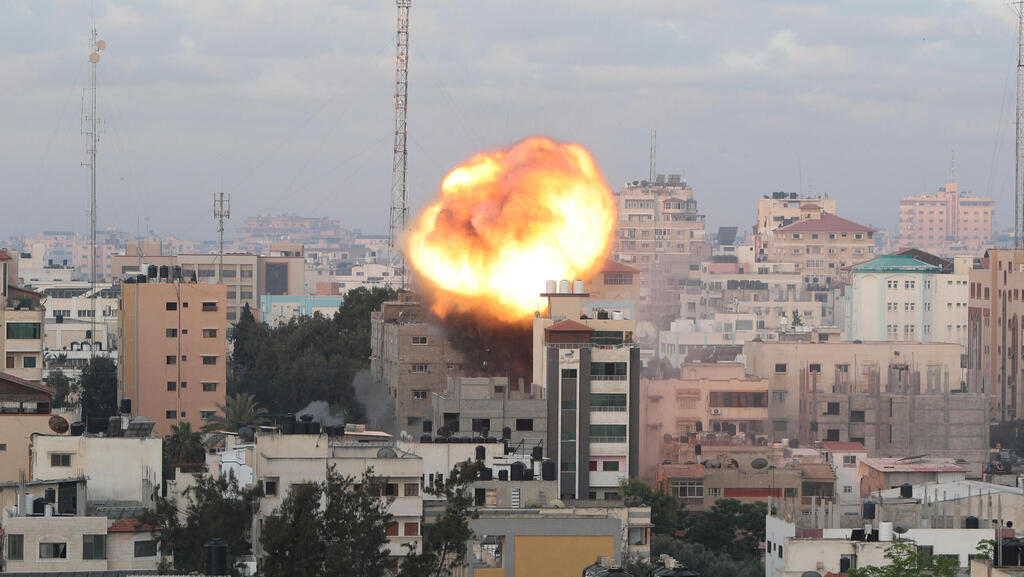 Rockets were also launched at the cities of Ashdod and Beersheba, further north.

"We will continue as long as it takes in order to restore calm for all of Israel's citizens," Israeli Prime Minister Benjamin Netanyahu, reaffirming remarks he has made over the past several days, said in a video clip on Twitter.

"One other thing: I'm sure that all of our enemies around us see the price we are exacting for the aggression against us and I am certain that they will have absorbed that lesson," he said, speaking in an air base hangar with a warplane behind him.

Hamas began firing rockets eight days ago in retaliation for what it said were Israeli rights abuses against Palestinians in Jerusalem. The current hostilities are the most serious between the militant group and Israel in years.

Nearly 450 buildings in the Gaza strip have been destroyed or badly damaged, including six hospitals and nine primary care health centres, the United Nations humanitarian agency said. Some 47,000 of the 52,000 displaced had fled to U.N. schools.

Israel said more than 3,450 rockets have been launched at it from Gaza, some falling short and others shot down by its Iron Dome air defences.

On Tuesday, the army said a soldier was slightly injured when a shell was fired after it allowed the fuel convoy into Gaza. It says its forces have killed around 130 Hamas fighters and another 30 from Islamic Jihad.

On a visit to Iceland, U.S. Secretary of State Antony Blinken said Washington had received further information requested from Israel about its destruction of a Gaza high-rise that housed the local offices of the Associated Press and Al Jazeera news organisations.

Blinken gave no details about the information he said came through intelligence channels about Saturday's attack.

Ron Dermer, a former Israeli ambassador to Washington and now an adviser to Netanyahu, said Hamas intelligence had been situated in the building, whose occupants were warned by Israel in advance to evacuate.

Hamas were engaged in activity that would have undermined Israel's ability to target effectively and intercept incoming rockets, Dermer told CNN.

Calling Netanyahu on Monday night, U.S. President Joe Biden said Israel had the right to defend itself against indiscriminate rocket attacks but encouraged it to make every effort to protect civilians, the White House said.

Egypt and U.N. mediators also stepped up diplomatic efforts, and the U.N. General Assembly will discuss the violence on Thursday.

General strikes were held on Tuesday in Israeli-annexed East Jerusalem, Arab towns within Israel and in cities in the Israeli-occupied West Bank.

The Israeli bombardment of Gaza, Ramadan clashes between police and worshippers at al-Aqsa Mosque in Jerusalem and a court case by Israeli settlers to evict Palestinians from Sheikh Jarrah in East Jerusalem have caused anger among Palestinians.

In the West Bank, Israeli forces shot dead a Palestinian who tried to attack them with a gun and improvised explosives, and an unmanned aerial vehicle was downed near the border with Jordan on Tuesday, Israel's military said.

Another Palestinian was killed by Israeli forces at a West Bank protest, health officials said. The military said soldiers had come under fire, which wounded two of them, and shot back.

Yuval Steinitz, a cabinet minister from Netanyahu's right-wing Likud party, deplored the general strikes as "another blow to the delicate fabric of relations and cooperation between Jews and Arabs".

Palestinian businesses in East Jerusalem were shuttered, including in the walled Old City, and in the mixed Jewish-Arab port city of Haifa in northern Israel. Protest organiser Raja Zaatar said 90% of businesses were shut in Arab neighbourhoods.

Overall in Israel, the strike appeared to have little effect on the general pace of commerce, or on the high-tech industry. An official at a large supermarket chain in which many Arab workers are employed said its stores were operating as usual, though some deliveries were delayed.

"We closed our shop like everyone else in solidarity with all Palestinians against the acts that are carried out against all of us," said Mahmoud Jabr, 50, a Ramallah grocery store owner.

Ra’afat al-Saman, a business owner in East Jerusalem's Salahaddin street, named after the Muslim conqueror who seized Jerusalem from the Crusaders in 1187, said: "This is the least we could do for our own people."