From a kibbutz to Mars

Ricor Cryogenic Systems builds cooling systems for spacecraft, including NASA’s Mars Curiosity rover, and it’s doing so from no other than kibbutz Ein Harod in northern Israel

TAGS:
How did one Israeli piece of technology end up on the Martian surface? It may come somewhat as a surprise to many people, but the coolant device on NASA's Mars Curiosity rover originated from a kibbutz in northeastern Israel. Ricor Cryogenic Systems, located in the northern kibbutz of Ein Harod, constructs sophisticated cooling devices for thermal imaging to help airplanes detect upcoming objects and other versions which enable spacecraft to survive in the harsh extreme temperatures of space. In 2012, the privately-held company landed the very first piece of Israeli technology on the surface of Mars, as part of a joint collaboration with NASA’s Jet Propulsion Laboratory (JPL) which built the Curiosity rover. One of Ricor’s cryogenic cooling systems was integrated into the Martian rover’s hardware, allowing its camera to survive the extremely cold conditions by assisting the system in reducing air pressure in its chambers. Ricor, which was founded in 1967, following the Six-Day War, chose to focus on the growing aerospace industry of the then-young state. In 1994, it began to venture into designing technology suitable for space and collaborated with NASA and the Ballistic Missile Defense Organization on the Clementine space mission to the Moon, which provided scientists with the first look at the lunar surface, including the poles, finding evidence of ice near the south pole. Since then, Ricor has collaborated with the Israel Space Agency, NASA, and others on designing sophisticated technology for space missions. 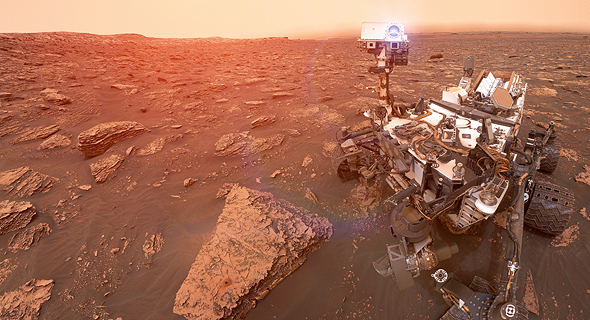 NASA's Mars Curiosity rover had Israeli technology onboard. Photo: NASA/JPL
“In 2008, our marketing team approached me and said that JPL was looking for a solution involving cooling devices. In the very early stages of the design, we designed a special interface for their system by taking an existing model we had, making some changes that fit a space environment such as adjusting certain materials so that the equipment would not become contaminated or malfunction in space,” veteran engineer and current VP of Marketing Victor (Vicky) Segal told CTech. 1,000 hours on Mars Ricor manufactures around 1,000 such coolers per month, producing several different models that differ in size, cooling capacity, and weight. To equip space programs in particular, the company screens a few versions out of several hundreds, using those with the highest performance capabilities for space missions. It subsequently tests them in its highly-specialized laboratory on the kibbutz, and analyzes the results, ensuring that there is no degradation in operational performance, while increasing the probability that failure during mission time is nearly obsolete. For Curiosity, Ricor sent JPL and NASA the equipment ahead of time which was later incorporated inside the rover around 2008.

When the rover landed on the Red Planet’s surface in 2012, it wasn’t just Ricor that made history, but the entire State of Israel whose equipment made it there.

“I remember there was a lot of excitement. It was a point of Israeli pride. We were mentioned in the newspapers. Added to that is the fact that Ricor is based on a kibbutz, it’s not the standard. When you think of Israeli high tech, you think of Tel Aviv, but building such sophisticated technology on a kibbutz - which is quintessentially Israeli - is really quite special. Having a company’s technology that was built on a kibbutz and reached space is definitely not something that you see everyday.” Curiosity has since ended its official service, but is still operational and the cooler is still running smoothly. “Our cooler is used on the rover with an instrument that conducts terrain analysis. The rover drills a small sample of terrain, makes an x-ray sample of the material, and the cooler is used to cool down the x-ray detector. In total, I believe that our cooler has been operational for a total of 1,000 hours on Mars.” 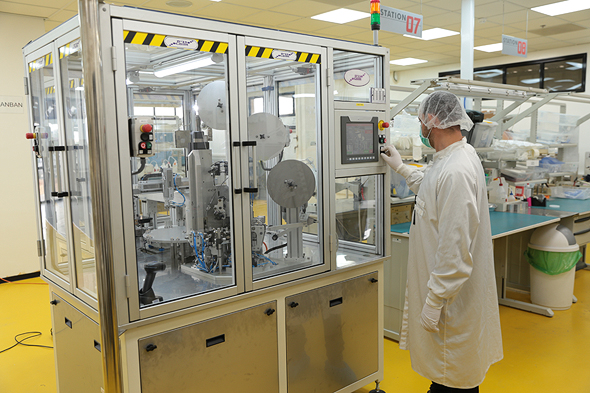 Engineers test Ricor's coolers in the lab at Kibbutz Ein Harod. Photo: Ricor
To Jupiter’s moons and beyond The company’s next big project is yet to be announced, but Segal relayed that it is another collaboration with NASA and JPL, and involves constructing another cooler for a mission to one of Jupiter’s moons, Europa. The Europa Clipper mission is planned to launch within the next two to three years. “We already delivered the flight models last year, and are working on completing some tests in our labs. The cooler has yet to be integrated into the actual spacecraft, and it needs to be able to operate after a long flight under extreme conditions. In that environment, the radiation is extremely high, and the cooler must be able to cool down to a very low temperature. Typically, our coolers cool down to 77 Kelvin (-196 celsius), but this one needs to reach 60 Kelvin (-213 celsius).”

To date, Ricor has manufactured around 100 flight model coolers that have been used in space missions. “The majority of our coolers are not for space, but are used to cool down infrared detectors, and are mainly used for thermal images taken by a camera that is able to view night conditions,” Segal explained. “We have many agreements with Israeli defense bodies who use our technology to protect the country’s borders. Towers installed near borders are equipped with our cameras that can identify any movement in the area. Our technology is also used for almost every airborne application to track and search either humans or targets. On days with zero visibility, those cameras can protect airplanes against missile attacks, since the system identifies the missiles as a source of thermal energy,” he added. 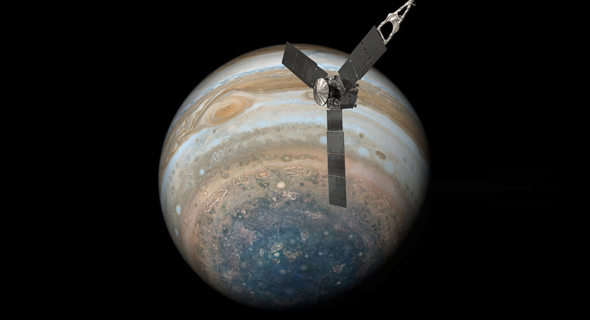 Ricor's next project will be a collaboration with NASA and JPL to build a cooler for a space mission to one of Jupiter's moons. (Pictured: Jupiter). Photo: NASA
What gives Israeli space tech companies that edge to be so successful? “I think that Israelis in general are very innovative. It’s difficult to enter the space tech market, but doing so opens the door to larger projects. The question is how do you get that experience? The market is changing and becoming more commercial, and the size of spacecraft is getting smaller. You need to be more creative and innovative, and here Israeli companies clearly have the advantage.” Do you think Israel's expertise in the defense market extends to the space tech market? “Yes. I think that once you reach that level of technology where you are involved with the aerospace defense market, jumping to commercial space is something that can be done, although it isn’t easy. Although there isn’t too much volume in the space market, once you are there and start to grow, you can become a bigger player. Elbit is entering into that market, Rafael, and of course Israel Aerospace Industries is already there. Companies need to understand that in the beginning it is an investment, but they can succeed.” Leading through Zionism Ricor is privately owned by the kibbutz, a bastion of pre-state Zionist ideals, where members live and work together. Although the company hesitates disclosing its financial statements, it is looking to grow in the cryocoolers infrared detectors market. In November 2020, it acquired the Israeli startup Netzer Precision Motion Sensors, which designs, manufactures, and supplies high-quality position encoders using its proprietary electric encoder technology. Currently, Ricor employs 215 people in Ein Harod, although only 30 are kibbutz card-carrying members. It also has a U.S. subsidiary, Ricor USA, which is based in New Hampshire and employs three people. In addition, Ricor has a corporate responsibility program, aiming to do good for society, whether that is planting trees, holding blood donations for Covid-patients, educating youth, housing soldiers stationed on the eastern-Jordan border, and more. 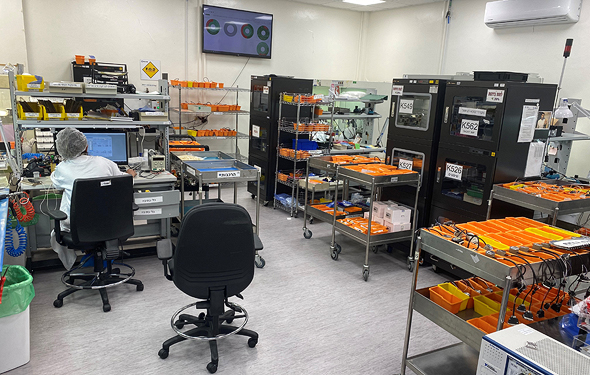 A scientists sits in Ricor's manufacturing facility on the kibbutz. Photo: Ricor

“Ein Harod is based in the Jezreel Valley, and it’s a place where you don’t find very much high tech. That’s why I believe that especially in our region, we need to be the leaders in everything we do. We don’t just want to employ the best engineers or technicians, or build cryogenic coolers, we want to do good for society and be a moral leader.”

Last Tu B'shvat, the Jewish holiday marking the new year for trees, the company planted several for the good of the environment. Last Friday, it hosted a group of Israeli soldiers on reserve duty stationed on the border and gave them a tour of the facilities. Ricor supports a nearby high school boarding school, which it routinely cleans, as well as tutoring its students in STEM subjects. “We aren’t only focused on technology, it extends way beyond that. Your employees need to wake up every morning, and think of how they can be the leaders of society.”