The FemForward sisterhood that helps women in tech get their due

FemForward, a Jerusalem-based project, encourages women to claim their place in tech. “They go through the program and they begin believing in themselves”

In her December 2010 TED Talk, which has been viewed over three million times, Facebook COO Sheryl Sandberg stated that ”men attribute their success to themselves and women attribute it to other external factors.” and continued by saying “women systematically underestimate their own abilities.” Unfortunately, a decade after Sandberg took the stage at that Washington D.C. event, women are still fighting for their place at the table. However, one Jerusalem-based project seeks to build on the Facebook executive’s words from the early stages of its participants’ careers.

“The biggest problems in women’s careers are not moving from manager to director which a lot of people kind of think it is,” says Rachel Wagner Rosenzweig, the co-founder of Fem JLM, a Jerusalem community for women in tech, and the driving force behind its project - FemForward. “It’s actually the beginning stages of their careers where women are falling behind for various reasons such as bias in the company, lack of confidence, differences in the way they promote themselves as opposed to men, and personally, I think there is kind of a boys club.” 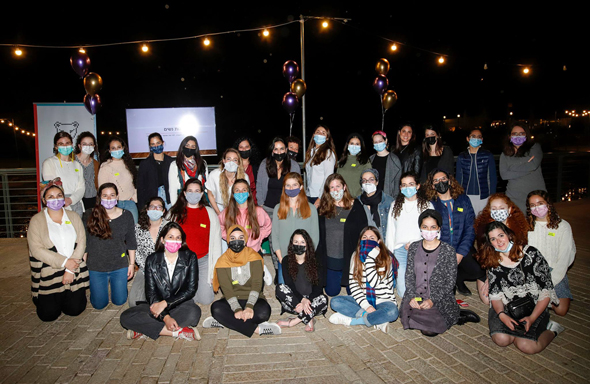 FemForward second cohort. Photo: Ricky Rachman
Based in Jerusalem, and targeting the city’s tech community, FemForward offers lectures, a mentorship program, and networking opportunities for women by women, focusing on the progress from junior to managerial positions in tech. It was created to address what is referred to as the “broken rung” trend, the lack of advancement of women in tech from entry-level to managerial positions. “When you’re just a junior in a company, you’re not necessarily actively thinking about promotion or about your career plan and this is very important because most companies are not going to do it for you, and that is where we come in,” Wagner Rosenzweig (30), an observant Jew originally from Manchester, England, told CTech. The three-month program, which will conclude its second class in June with over 30 participants, is designed to provide a comprehensive and informative experience for women working in Jerusalem-based tech companies, and aspire to advance to managerial and eventually senior positions. It consists of lectures, given by leading female executives in tech and surrounding industries from all over Israel, as well as a mentorship program. Lecturers and mentors come from companies such as Google, Facebook, Jerusalem Venture Partners, Mobileye, Intel, and more. Some of the names include Orit Shilo, Head of Google for Startups Campus Israel, Adi Soffer Teeni, General Manager of Facebook Israel, and Janine Kutliroff, serial entrepreneur and former Founder and CEO of Omek, which was recently acquired by Intel. Wagner Rosenzweig says she was somewhat surprised with how willing some of these successful and very busy women were, and how crucial it is for those seeking guidance. “We help them understand what their career plan is, why they should advance, why they’ve got the skills to advance, and that we are going to help them advance.” The numbers the project is reporting showcase that advancement. Out of the 19 participants of the first cohort, which ended earlier this year, 53% asked for and received a raise, while 31% earned a promotion, including 29-year-old Allie Feuerstein. “I was working for two-and-a-half years and I was definitely feeling like I wanted a bigger challenge, and I felt a bit stuck. I was in the workforce now probably for 7 years and I was always in these junior-level roles and I wanted to progress.” “No one is going to pitch you better than yourself” Feuerstein, a mother of two, a modern orthodox Jew originally from New Jersey, works at Jerusalem-based investment platform OurCrowd. Recently she was promoted from an Investor Relations Representative position to directing a new business team with six people working under her, and she attributes much of her success to the project and her mentor. When Feuerstein saw her company expanding she began asking herself “if we are growing the team, who is better to be in a management position than me?” However, she explains that “as crazy as it sounds it wasn’t a realization that came naturally. I didn’t really think of myself that way, and speaking to Fleur, but also hearing from the other lectures in the course, really solidified that in me. like, you can do this but you have to push for yourself to do it.” Fleur is Fleur Hassan-Nahoum (47), Feuerstein’s mentor. When asked about first meeting her mentee she says she “saw a very talented woman who was told, as all of us have been told subliminally from when we were born, almost like be grateful you have a job, don’t shout too loud or they won’t like you.” Feuerstein says they “bonded immediately” and that she considers the best tip she got from Hassan-Nahoum to be that “if you want career growth you need to chase after these opportunities. And no one is going to pitch you better than yourself so learn how to pitch yourself, figure out what you want, and just go after it.” Hassan-Nahoum’s advice comes from experience. She is the Deputy Mayor of Jerusalem for economic development, international relations, and tourism. She teaches public speaking and messaging in the program she co-founded, and she is on its advisory board alongside the other co-founders: Meirav Atun Amiry, CEO of In Touch, a Jerusalem-based recruitment and employment agency, Mirit Leon Mendelovich, VP of People and Operations at health-tech startup Surgimate, and serial entrepreneur Shaindy Babad, who works to advance the employment of the ultra-Orthodox sector. 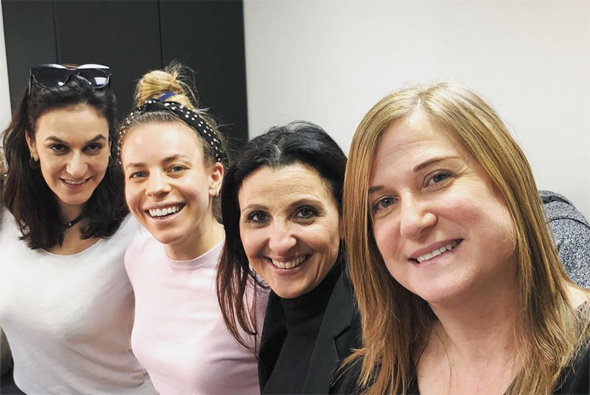 FemForward co-founders: Meirav Atun Amiry (left), Rachel Wagner Rosenzweig, Fleur Hassan-Nahoum, Mirit Leon Mendelovich. Photo: FemForward
“To ask for the job you know you are good at is not arrogance, it is just confidence,” Hassan-Nahoum says, trying to rid women from such discouraging notions. She also sees great importance in having a project such as FemForward in the Israeli capital, a city known for its diversity but also political tensions and many conflicts. “I think it is like sisterhood above politics,” she says about the fact that Arab and Jewish Orthodox women are part of the project, both as participants and as mentors. A relationship, not mentorship One of those mentors is Maissa Ballout Shamshoum (37). She is a CPA and CFO at Goldencare Doshi Group, which contains a geriatric medical center and a trade center based in Nazareth. She has extensive international experience working in Israel and Jordan, as well as earning her MBA from the Kellogg School of Management at Northwestern University in Chicago. She is a mother of three, Christian-Arab from Peki'in, a multicultural town in northern Israel. Ballout Shamshoum applauds the FemForward’s diversity, recognizing its importance. However, the recent flare-up between Israel and Gaza and increasing Jewish-Arab violence in Jerusalem and other cities have put that diversity, like much of Israel, to the test. Earlier this month, just as participants were ready to meet for the first time since the coronavirus kept everyone at bay, rockets from Gaza sent Jerusalemites to seek shelter. “When I joined the program it was the Covid year. Everything was online, it was virtual hugs and virtual connections. So it was really interesting because I met Rachel only once, in Jerusalem, under the bombings.” “My mentee is a Palestinian, she lives in East Jerusalem and the whole story of Palestinians in Israel is a real part of her,” Ballout Shamshoum shares. “On the other side, I am trying to guide her not to bring politics inside of anything so it was really interesting.” But Ballout Shamshoum has much more to offer her protege than just coping with a complicated reality, and she wants her to know it. “I was meeting my mentee once a week, but I was telling her all the time that mentorship is a relationship, we cannot progress in a mentorship if we are not in a relationship.” FemForward participants are already talking about taking these relationships to the next level. Alumni social media groups already popped up, while mentors and speakers encouraged the junior workers to keep in touch even if they were not assigned to one another. Going outside the walls There are already plans to expand the program outside Jerusalem and into other fields, including even a joint program with women from the UAE. “The next thing we want to do is a program that takes women from here and there and swap mentors,” says Hassan-Nahoum, who is also one of the founding members of the UAE-Israel Business Council and founder of the Gulf-Israel Women's Forum. 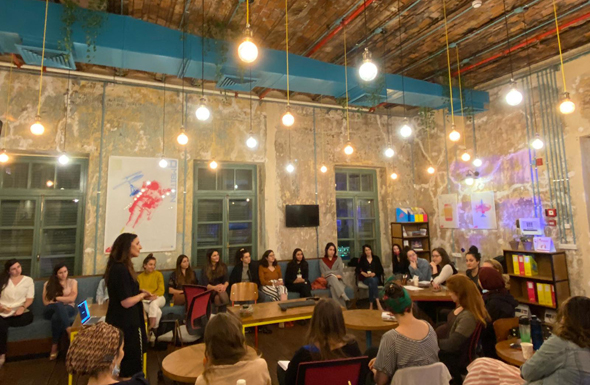 Fleur Hassan-Nahoum speaking in front of FemForward participants. Photo: Ricky Rachman
At that 2010 TED Talk, Sandberg asked why it matters if women say they succeeded because “they got lucky, someone helped them, they worked really hard,” and she answers “because no one gets to the corner office by sitting on the side, and no one gets the promotion if they don’t think they deserve their success.” It is that shift in state of mind that Wagner Rosenzweig wants FemForward participants to go through. “When I was interviewing the second cohort I had tears in my eyes,” she said. “They say things like ‘I think I want to be a manager, I don’t really know if I have the skills to be a manager’ and that’s how it starts. And they go through the program and they begin believing in themselves, getting to network, getting the skills and they come out of the program basically saying, ‘I can do it, I am going to do it and this is how I am going to do it’.”