The entrepreneur from Kafr Manda who built a cybersecurity unicorn

From the day he got his first computer, Orca Security co-founder Wagde Zabit knew he found his calling. How does one man from a small Arab community get to the top of Startup Nation?

Wagde Zabit got his first computer from his father when he was five. It was a Commodore 64, and it was the first computer in his hometown of Kafr Manda, a Muslim Arab community in the Galilee region in northern Israel. "That's how my love for computers started. I began playing, seeing how it works, and in first and second grade I started programming in BASIC and Logo, and have not stopped since," he says. Ever since the day he got the computer from his father, a math teacher turned computer teacher instructor, Zabit has known what he wants to be when he grows up. 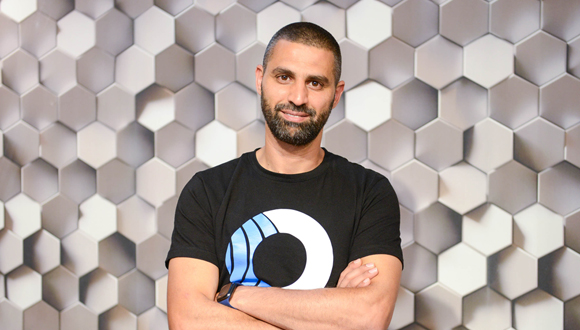 Orca Security co-founder Wagde Zabit Photo: Muhammad Khatib
Leaving home Growing up, Zabit attended school outside his town, in neighboring I'billin where his older sister also studied. “At that time our village was a traditional religious village, one where everyone knew everyone, and then I started studying in a new school, with new teachers, and a lot of students from all across Israel’s north. I started meeting Druze people, Christians, there were Jewish teachers and counselors, I started to see the real world. The teachers did not come to only teach, rather they instilled values, not only taught from the books but carried out discussions with us and encouraged us to think and express an opinion," he says. After graduating from high school, Zabit already had his next goal in mind. "I knew what I wanted to study. My goal was to study computers at the Technion - Israel Institute of Technology, in Haifa. My parents considered it as a very sensible choice because my uncle studied computers at the Technion and pushed me in that direction. But it seemed like a strange choice to some of my friends and relatives. They would tell me. 'Why don't you go to study medicine? What is your problem?’ My answer was ‘I do not like to work with people, I like to work with computers, with inanimate objects.’ Those days the dotcom bubble was bursting and people told me that the market will be dead in a few years, but I persisted and got to the Technion in October 2000." Setting goals Zabit remembers his time in the Technion as rough, a period of survival. “I started studying at the Technion after the October 2000 riots, where I lost one of my best friends. The first few semesters were very difficult and it greatly affected the atmosphere, the grades, and the general mood," he says. He chose a software engineering track, which is considered one of the most demanding tracks at the Technion. "I know a lot of people who left high-tech and went to study medicine," he says. After studying for three years, he decided to stay another year and improve his grade average. He set himself a goal to reach an average of 82. He eventually finished with an average of 82.1. Going the distance At 23, after graduating from the Technion, Zabit took a few months to himself. He knew that after five years in Haifa, he wanted to move to Tel Aviv, Israel’s high-tech center. Shortly after, a friend who studied with him at the Technion told him that they were looking for a junior member on his team at Check Point, and for the first time, Zabit compiled a resume. "I was invited to a series of interviews in November 2005, I did a test and an interview and then they sent me for another interview, and it was all during Ramadan when I was fasting. I was eventually accepted and moved to Tel Aviv.” At Check Point, Zabit advanced in the technological track and vehemently refused to do so in managerial positions. "I made a decision on the first day of work that I want to advance in the technology track, and that I am investing all my energy there. I do not like to manage people. I was once offered to be a team leader, and I made it clear that I was not interested and have not opened the issue since," he says. Indeed, he progressed very quickly in the company, and from the beginning, was part of a strong team that was responsible for the infrastructure of all the products in the company. “At one point they decided to set up an innovative research group at the company and recruited three people, including myself, for it. At that point, after six years at the company, I was working on new technologies and strategy, which unlike being immersed in code writing and problem solving, you run your own product and decide what to do and in which direction to take the company. It was one of the most significant roles I had, and I learned a lot from some of the strongest people I worked with."

Orca Security employees Photo: Orca Security
It was also in Tel Aviv where he met his wife through mutual acquaintances. She was also originally from northern Israel. "We had thoughts of living in Tel Aviv, but we decided to return to the north, to be closer to our parents, to the family, we did not want to raise children in a big city atmosphere," he says. Although they moved to a small community - Kafr Manda, Zabit continued to work at Check Point and drive two hours in each direction because he was not interested in working in the north. "All the really interesting things in high-tech are happening between Tel Aviv and Herzliya. Despite the difficulties, I continued to travel to a distant workplace because I was constantly progressing at work." Starting from scratch In 2019, Zabit left a stable and secure position at Check Point for a new venture, Orca Security. The company was created by two unrelated groups of entrepreneurs from Check Point that came together. One group consisted of six entrepreneurs and the other of two, and together they formed a team of eight founders, men, and women from different backgrounds: religious Jews, Arab, and intelligence units alumni. They decided to stay in cyber because "We know cyber very well, we know how the industry works, what people are willing to pay for, how sales are conducted,” Zabit says. “When you change organizational practices with a new product in the market, it is important to know how to work.” The decision to leave a rewarding and secure position and begin a journey into the unknown was not an easy one. "When I told my wife I wanted to leave she said I'm crazy. I told her it's an adventure, what could happen? That we'll fail? If that happens I'll find a job. I'll go back to Check Point. The people with me were Check Point A-listers, to go with them is something I should not pass up,” Zabit explained. “It is something I want people to know, especially in the Arab society, that they should not be afraid to jump into the water, take risks, go on adventures. All people, but we especially in this country, love stability because we always have something in our minds that tells us we have to prove ourselves, be the best in order to keep going. There is a fear that something bad will happen, and if people find a good job they stay." Orca was founded in one of the founders’ apartments, Liran Antebi. Zabit says that “at first we had no idea at all what we wanted to do. We started meeting, every time at someone else’s place until we came up with an idea and then we started working in Liran's apartment, and it was cool, starting something from scratch. Everyone's dream in high-tech is to build a company and succeed. Luckily, it worked. We sat in the living room, we thought of a name, a logo, it was all from scratch, there was nothing, and today we have a company that has more than 100 employees, which we started. It gives a great feeling of satisfaction.” What it is all about In March of this year, Orca Security announced a $210 million series C funding round, with the company being valued at $1.2 billion, making it a unicorn. But despite his success, Zabit stayed behind the scenes and refrained from interviews. “We are in high tech to work, and I did not like to talk about what I did. It was only after we founded Orca that I changed my mind and realized that we need to talk about our successes, to encourage teenagers and high schoolers who are realizing that they can do more than medicine and pharmacy (a common field of study for Arabs in Israel),” he says. ”There is a whole field which affects humanity’s future and has cool stuff in it. Things from code planners, Wi-Fi technology, electrical vehicles, and nanotechnology, it's all high-tech and we are missing out on the people from our sector. “There are a lot of technologically talented people, but there a lot of things missing to set up a startup, people who are good at management, money, human resources, all the things that we are missing in Arab society. We are 20% of the population, and there are almost none of us who reached very high levels of management. I want us to go into entrepreneurship. It will be a win-win. It will close gaps, result in programs for teenagers, while also raising our socio-economic status and lower crime rates. This can have very far-reaching implications for our society. That is why I understood that we need to talk. Not so that people can see that we are succeeding but so that we can become role models for people who can see that it is possible. You can dream and you can realize your dreams.”