TAGS:
The most lucrative initial public offering ever by an Israeli company was completed on Wall Street on Thursday when monday.com shares began trading on Nasdaq. The Israeli work operating system announced that the pricing of its shares has been set at $155 per share, meaning it raised $574 million at a market value of about $6.8 billion. The company saw its shares climb by 15% to $178 on the first day of trading. The company, with backers including venture capital firm Sapphire Ventures and investment manager Hamilton Lane, announced last week that it plans to sell 3.7 million shares for $125 to $140 apiece, but high demand resulted in the rise in pricing.

The biggest IPO by an Israeli company to date was completed by Mobileye in 2014 when it went public at a valuation of $5.3 billion. Mobileye was acquired by Intel three years later for $15 billion. ironSource and eToro were both recently valued higher than monday.com, but their public offerings will be completed via SPAC mergers and they have yet to have been finalized.

The Tel-Aviv-based company has developed a work operating system (Work OS) where organizations of any size can create the tools and processes they need to manage every aspect of their work. It was founded in 2012 and is led by Co-Chief Executive Officers Roy Mann and Eran Zinman.

"We went public because we at the right place to do so considering our revenue and the timing of the market was good," Zinman and Mann told Calcalist. "This isn't the end of something but rather the beginning. We want to be a big company." 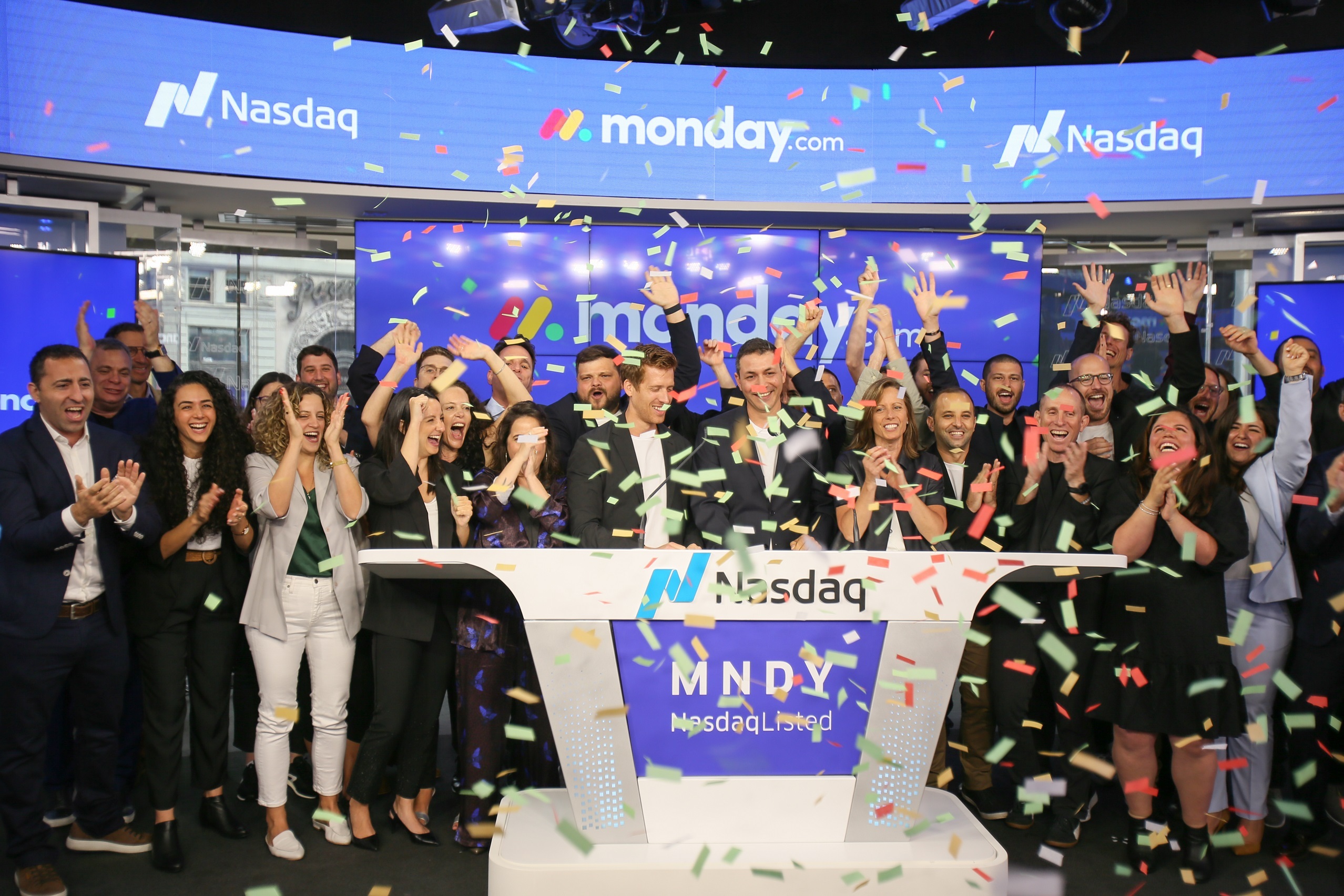 monday.com goes public on Nasdaq. Photo: Courtesy
Salesforce.com’s investment arm and Zoom Video Communications have each agreed to buy $75 million of monday.com’s shares in a private placement, the company said.

monday.com was valued at $2.7 billion after its last funding round, Bloomberg News reported in May last year.

Goldman Sachs, J.P. Morgan, Allen & Co., and Jefferies are among the underwriters for monday.com’s IPO. It will list on Nasdaq under the symbol “MNDY”.

The company’s revenue rose 85% to $59 million in the three months ending March 31, its filing showed. Net loss, however, widened to $39 million from $19.9 million in the same period.

monday.com has raised $234 million to date, from investors including Sapphire Ventures, Hamilton Lane, HarbourVest Partners, Ion Asset Management, Vintage Investment Partners, Stripes Group, Insight Partners, and Entrée Capital. According to the company, it has over 127,000 paying clients in around 200 business verticals. The company said it employed 799 people as of the end of March, an increase of 199 from January 2019. monday.com's biggest shareholder is U.S. fund Insight Partners, which holds 42.7% of its shares. Sonnipe, part of Entrée Capital and the company's first major investor, holds a 12.4% stake. Mann has a 15.3% stake, while Zinman holds 5.6% of the shares. Wix founder and CEO Avishai Abrahami owns 4% of the company's shares.