Netanyahu out, Bennett in as Israel marks end of an era

The new government, formed after an inconclusive March 23 election, largely plans to avoid sweeping moves on hot-button international issues such as policy toward the Palestinians, and to focus instead on domestic reforms

TAGS:
Benjamin Netanyahu's record 12-year run as Israel's prime minister ended on Sunday with parliament approving a new "government of change" led by Naftali Bennett, an improbable scenario few Israelis could have imagined. But the razor-thin 60-59 vote of confidence in a coalition of left-wing, centrist, right-wing and Arab parties with little in common except for a desire to unseat Netanyahu, only underscored its likely fragility. Addressing parliament before Bennett was sworn in, a combative Netanyahu said: "If we are destined to go into the opposition, we will do so with our heads held high until we can topple it."

That will happen, 71-year-old Netanyahu added, "sooner than people think". 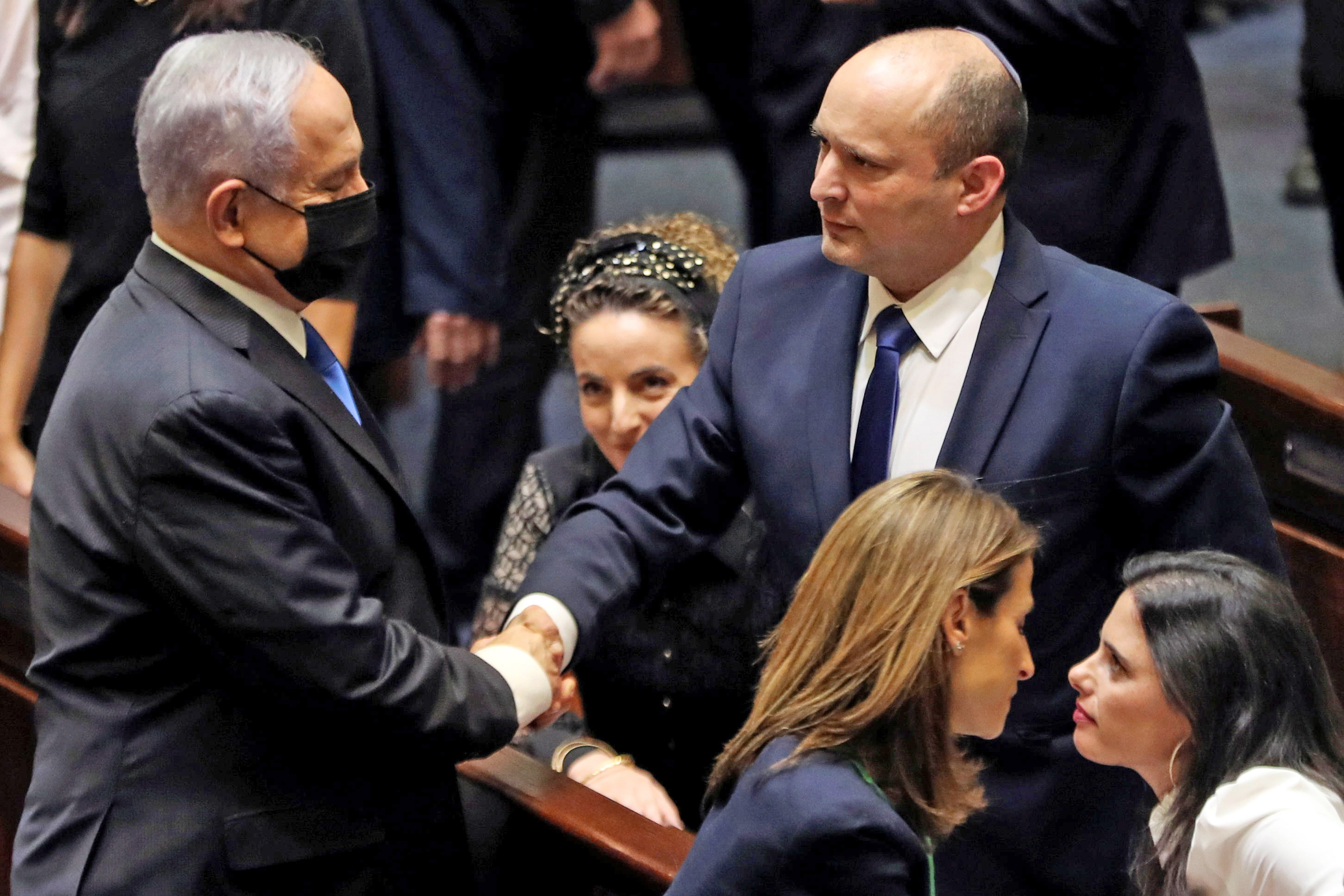 The new government, formed after an inconclusive March 23 election, largely plans to avoid sweeping moves on hot-button international issues such as policy toward the Palestinians, and to focus instead on domestic reforms.

Palestinians were unmoved by the change of administration, predicting that Bennett, a former defence chief who advocates annexing parts of the occupied West Bank, would pursue the same right-wing agenda as Likud party leader Netanyahu.

Israel's longest-serving leader, Netanyahu was prime minister since 2009, after a first term from 1996 to 1999.

But he was weakened by his repeated failure to clinch victory in four elections over the past two years, including a vote in March, and by an ongoing corruption trial, in which he has denied any wrongdoing.

Under the coalition deal, Bennett, a 49-year-old Orthodox Jew and high-tech millionaire, will be replaced as prime minister by centrist Yair Lapid, 57, a popular former television host, in 2023.

With his far-right Yamina party winning only six of parliament's 120 seats in the last election, Bennett's ascension to the premiership as the head of a kaleidoscope of parties was a political jaw-dropper.

Interrupted by non-stop shouts of "liar" and "shame" from Netanyahu loyalists in parliament, Bennett thanked the former prime minister for his "lengthy and achievement-filled service on behalf of the State of Israel".

But little love has been lost between the two men: Bennett once served as Netanyahu's chief of staff and had a rocky relationship with him as defence minister. In the run-up to the new government, Bennett spurned Netanyahu's call to join with him, rather than with Lapid.

On the international stage, with his polished English and booming baritone voice, Netanyahu had become the face of Israel.

He resisted international calls for Palestinian statehood he described as a danger to Israel's security, while forging formal relations with the United Arab Emirates, Bahrain, Morocco and Sudan and decrying Iran's nuclear programme.

U.S. President Joe Biden congratulated Bennett, Lapid and the rest of the new cabinet and said he looked forward to working with Bennett to strengthen the "close and enduring" relationship between their two countries.

"My administration is fully committed to working with the new Israeli government to advance security, stability, and peace for Israelis, Palestinians, and people throughout the broader region," Biden said in a statement.

Both abroad and at home, Netanyahu has been a polarising figure. Often referred to by his nickname Bibi, Netanyahu is loved by his supporters and loathed by critics.

His opponents have long reviled what they see as Netanyahu's divisive rhetoric, underhand political tactics and subjection of state interests to his own political survival. Some have dubbed him "Crime Minister" and have accused him of mishandling the coronavirus crisis and its economic fallout.

Addressing parliament, Bennett echoed Netanyahu's call for the United States not to return to the 2015 nuclear pact between Iran and world powers, a deal abrogated by Biden's predecessor Donald Trump.

"Renewal of the nuclear agreement with Iran is a mistake, an error that would again grant legitimisation to one of the darkest and violent regimes in the world," Bennett said. "Israel will not allow Iran to equip itself with nuclear weapons."

Thanking Biden for his "years of commitment to Israel's security", and for "standing by Israel" during fighting with Hamas militants in Gaza last month, Bennett said his government would pursue good relations with U.S. Democrats and Republicans.

"The government will make an effort to deepen and enhance our relations with both parties - bipartisan," Bennett said.

Bennett has drawn anger from within the right-wing camp for breaking a campaign pledge by joining forces with Lapid - and an allegation from Netanyahu that he defrauded the electorate. Bennett has said another election - a likely outcome if no government were formed - would have been a disaster for Israel.

Both Bennett and Lapid have said they want to bridge political divides and unite Israelis under a government that will work hard for all its citizens.

Their cabinet, which met for the first time late on Sunday, faces huge foreign, security and financial challenges: Iran, a fragile ceasefire with Palestinian militants in Gaza, a war crimes probe by the International Criminal Court, and economic recovery following the coronavirus pandemic.

Bennett listed as priorities reforms in education, health, cutting red tape to grow businesses and lower housing costs. Coalition leaders have said it would pass a two-year budget to help stabilise the country's finances and maintain a "status quo" on issues of religion and state.