DevOps platform JFrog announced on Tuesday that it has reached an agreement to acquire fellow Israeli company Vdoo in a cash and stock-based deal valued at approximately $300 million.

JFrog, which is traded on Nasdaq and had a market cap of $4.65 billion as of Tuesday, believes Vdoo will help accelerate its vision of becoming the company behind all software updates and creating a world of Liquid Software by expanding its end-to-end DevOps Platform offering, providing holistic security from the development environment all the way to edges, IoT and devices. 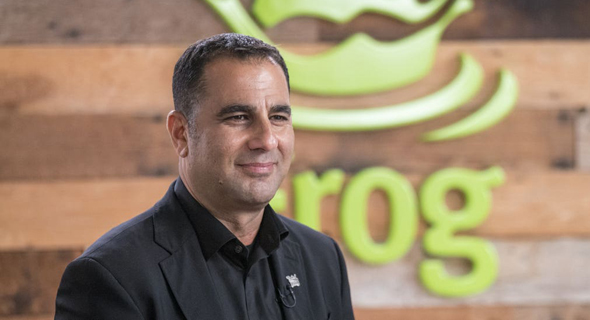 JFrog CEO Shlomi Ben Haim. Photo: Bloomberg
Vdoo announced in January of this year that it had extended its Series B investment round by an additional $25 million, after raising $32 million a year-and-a-half earlier. Vdoo was founded in 2017 by Nati Davidi, Uri Alter, and Asaf Karas after they served a lengthy service in the elite technology intelligence unit of the Israeli military. Vdoo delivers an automated product security platform for device manufacturers and deployers.  “We are excited to have Vdoo join the JFrog family,” said Shlomi Ben Haim, co-founder and CEO of JFrog. “It is clear to us that the joint vision of changing the way software is being created, released, and updated to the edge will be our compass as we offer the market a binary-focused solution to secure their organization’s software assets. This move will amplify JFrog's current success with our security solution, JFrog Xray, and create the expectation that ‘fearless releases’ will be the experience for both Security and Development teams.” As part of the integration process, JFrog will triple the size of its security experts team - including engineering, marketing, and sales - with employees that will be located in Israel, Germany, Japan and North America.

"This proposed acquisition is a great fit for both our companies,” said Netanel (Nati) Davidi, co-founder and CEO of Vdoo. “We share a vision around DevOps and security: if any DevOps company isn’t also a security company, it is solving only a small piece of the puzzle. We're proud that our team has focused on being hybrid and holistic, and integrated across all dimensions throughout the software delivery life cycle. We look forward to continuing to power this Liquid Software mission as part of JFrog, and anticipate industry-changing innovations from the joint team."