Words can also be a means of wealth

When the new tech industry reality contradicts life itself, a new language is constructed to describe the unimaginable

“The valuation is on par with the market’s size and opportunity” / “Even if we reach a fraction of the market, we are talking about billions” / “$2 billion is only 1% of our potential” / “$10 billion is the new billion” / “There is the extreme scenario of $100 billion” / “We choose to be profitable at this stage” / “We can become profitable at a flip of a switch” / “Our numbers completely justify the valuation”

One of the central functions of a language is mediating reality. It allows humans to observe events, describe them in words, respond to them or explain them so that others will understand. 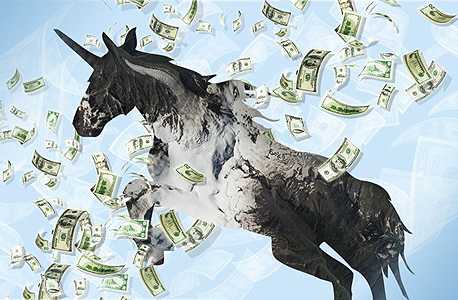 "The purpose of unicorn language is to preserve momentum through aggressive marketing of a promise"
One option is to give up. Leave the abstract as it is: inconceivable. In Judaism for example, God, which is a completely abstract idea, is not described at all. It is not acceptable to even write or pronounce God’s explicit name. Here, the language consciously gave up, and the result is that when one speaks of God each holds in his imagination a different figure. Another option is to distort the language. Reinvent it to fit a description of un-reality. Disconnecting it from its earthly logic so that it can float in the realms of irrationality. Such is the language that has been growing in recent years in the high-tech industry in general, and around unicorns in particular (it is no coincidence that highly-valued technology companies are named after a mythical animal). The language of unicorns is an attempt to re-weave words in a way that sterilizes them from their original meaning so that they can describe what is irrational. For example, a company with a face value of billions of dollars, even though it does not yet make any profit. One interesting case study can be that of Gong, a startup company that develops business intelligence for salespersons. Ten months ago, it raised a whopping $200 million, at a phenomenal value of $2.2 billion - even before it earned one shekel. More recently, less than a year since that stunning fundraiser, it raised another $250 million, this time at an unimaginable $7.2 billion valuation. Within Gong's tangible business space - and it is just one of many examples - there is no explanation for such a large inflow of money or the dramatic spike in value. Gong has not invented anything in the last few months that did not exist before, it has not received FDA approval for a life-saving drug, it has not made an insane profit. Therefore, ordinary language can provide an external rational explanation for Gong: world interest rates are next to zero, governments have poured trillions into the market during the Covid era, investors have lots of excess money looking for returns, there is massive hype and there are very rich people who are afraid to miss a big opportunity. So Gong benefits. However, Gong’s CEO chooses to speak in unicorn language: "The valuation is not crazy, it even makes sense," he said in an interview with Calcalist regarding the possibility that this is an irrational move. "Gong can reach well over $20 billion... We always thought about something big... it can even reach $100 billion in six years, I have no doubt it is possible." The purpose of unicorn language is to preserve momentum through aggressive marketing of a promise. And when there is no commitment to rationality, the arguments are based on subjective indications: "the valuation is not insane," "there is no doubt that it is possible" ("doubt," by the way, is a dangerous word that has never been translated into unicorn language). Like God, when talking about a unicorn anyone can imagine it in any way they see fit. Unicorn entrepreneurs cannot be blamed for using fabricated language. We would all be willing to pronounce every word required for a fraction of all this wealth. A wealth that belongs to them and their children from now until forever, even if their company is hit by a gong and disappears tomorrow morning. It is a language that benefits its speakers, such as French in the 19th century, English in the 20th century, or Chinese in the last decade. And like Latin of the past, it does not appeal to the masses. The target audience is venture capitalists, private investors, and sometimes the employees themselves. Only they are proficient in the subtext and subtlety of unicorn grammar. The language is also directed, perhaps subconsciously, to the ears of its speakers themselves. Unicorn language helps company entrepreneurs and executives - particularly brilliant and talented people - to live in peace with the sometimes inhuman gap between the money thrown at them and the fact that their contribution to humanity is not a cure for cancer or a vaccine for the coronavirus, but a small business feature. And the ability to turn that feature into a profit machine hasn’t even been proven, and that its incredible value could be erased with a mere interest rate hike by the U.S. Fed.