Israeli startups should choose the UK when expanding to Europe

Israeli startups continue to break records in fundraising, and many expect to see even more IPOs in 2021. The Taylor Wessing law firm outlines potential opportunities in Europe and their next phase of success

TAGS:
London is ready and waiting for Israeli entrepreneurs and technology companies. While Israeli entrepreneurs and startups have traditionally been focused on expanding to the U.S. - and for good reason since America has given such startups access to capital, opportunities for expansion in one of the biggest markets, and seemingly endless exit opportunities, yet Europe is also a strong destination. Somewhere along the flight path between Israel and New York, and a mere four hours from Ben-Gurion airport, London is now the leading global center for innovation, with the most international startup community in the world and unparalleled access to Europe, the world’s largest trading block. “We’re seeing a spike with our startup and entrepreneurial clients who are serious about establishing a base in the UK as part of their international expansion plans,” explained Partner Josef Fuss. 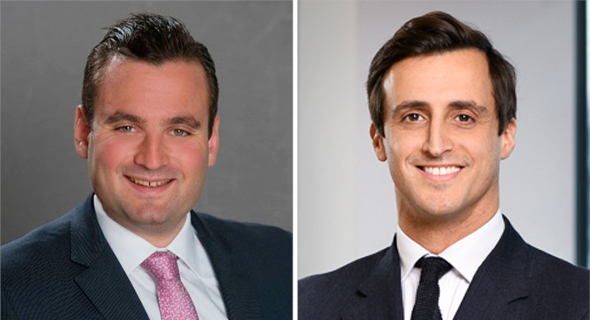 From right to left: Josef Fuss and Nathan Krapivensky of the Taylor Wessing law firm. Photo: Taylor Wessing LLP
A thriving economy By opening in the UK, Israeli startups gain direct access to Europe. As the world’s largest trading block, consisting of 500 million people and a GDP of 25,000 pounds per head, it’s undoubtedly the platform that has the scale and scope for startups to grow and reach other markets around the world, including rapidly growing emerging ones in Africa and Asia. The EU is the top trading partner for an incredible 80 countries, compared to 20 for the U.S. British trade with Israel is booming and bilateral relations are expanding in defence, science, tech, business, and cybersecurity contributing to a new strategic partnership between the two

countries, according to BICOM’s new report, Israel and the UK are also on the verge of signing a historic free trade agreement, which will remove barriers to trade between both countries, support jobs, and drive growth.

The business environment British-Israeli relations have deep roots, and the two countries share similar cultural nuances as well as similar parliamentary government systems, and legal and business practices. Moreover, the advantages of the geographical proximity between both countries should not be underestimated. The UK is closer, more cost-effective and easier to access than the U.S., which means less time is spent on planes and more time is spent doing business. That edge helps Israeli businesses attract a customer base quickly too. Tax incentives Taxes in the UK are considered low by European standards, particularly employment and social taxes that are concerning for startups. There is a corporation tax rate of 19%, and the UK is a favorable location for a European holding company. Other substantial tax benefits to UK taxpayers that invest in startups abound, and these schemes can be open to non-UK startups that have a permanent base in the UK.

With four of the world’s top 10 universities based in the UK, there is no shortage of top-class talent for Israeli startups to expand their expertise as well as their business propositions. In addition, with multiple Silicon Valley recognized innovation hubs throughout the UK in places like London and Cambridge, and significant government investment commitments, the UK is one of the world's heavy weights in the tech and life sciences sectors. Tech also employs more than a fifth of the workforce in the UK’s biggest cities. The largest tech cluster is based in Tech City, East London, which is home to a pool of at least 357,900 developers, more than any other European city according to 2019 figures.

The UK has a strong innovative ecosystem and was ranked fifth in the world for innovation in 2019. This is supported by generous government funding and incentives for R&D. The UK is a global leader in fintech, attracting international groups and investors, which make up around 10% of the global market. In addition, London is ranked second as a top financial center after New York according to the Global Financial Centres Index, putting the UK at the cutting-edge of innovation – from peer-to-peer lending, to challenger banks, cyber, insurtech, regtech, artificial intelligence, paytech, tech for good, and blockchain. Moreover, the adoption rate of fintech is high, and consumers are more willing to try new apps and banking concepts than in other markets.

“If you're a fintech startup, there's no better place to develop your business,” remarked Co-head of Israel group Nathan Krapivensky.

The primary regulator for most fintech companies, the Financial Conduct Authority (FCA), supports such startups, provides regular access, resources, and advises how to navigate the necessary compliance. They have even established a reputable regulatory “sandbox” where fintech startups can test their models in a real world environment with other businesses and investors, before incurring substantial regulatory experience.

For the first half of 2021, European startups captured 20% of global capital, up from nearly 14% percent since the first half of 2019. All other funding stages were up year over year as well, with early-stage funding up 96% and seed capital up 66%, according to Crunchbase data.

London also offers one of the world's most developed and sophisticated capital markets, the London Stock Exchange, which is home to 24 Israeli companies from 11 sectors with more on the way. In 2020, investors rebalanced their portfolios in the tech sector and Israeli tech companies have been a primary beneficiary, seeing shares deliver net gains over a one year period. In October 2020, Kape Technologies set out to raise $100 million following the US acquisition of PIA in 2019, and it was able to significantly upsize this deal to $115 million.

Israeli startups can take advantage of all the capital available on the continent at the moment. UK venture capital investment is the third highest in the world with a record high of $15 billion – ahead of India, Germany, and France. London alone has attracted more than $3.2 billion worth of investments in 2020, the fourth highest behind San Francisco, Shanghai, and New York.

A great support network for Israelis

There is a thriving Israeli founder community in London, which provides a network of friendly faces and Hebrew speakers to socialize and do business with including accelerators and mentors, shared workspace providers, startup focused professionals, and investors. Many UK and European VC funds have Israel desks or partners focused on the Israeli market, and connections abound alongside an appetite for investing. Some examples of Israeli-born companies using London as their base include HiBob, Curve, 888 Holdings, and Plus500.

Gateway to Europe and beyond

London can create abundant connections to expand businesses worldwide, and can connect Europe with Asia, providing further expansion opportunities. London has many industry sectors including tech, finance, green energy, hospitality, and creative fields — meaning that businesses should fit in nicely regardless of their niche. Additionally, companies based in the UK also have access to lower-cost tech resources elsewhere, particularly in southern, central and eastern Europe, and some startups commute to back offices at such locations while being fully integrated with central-UK-based teams.

Furthermore, many of the large corporations that are potential European customers for Israeli startups have substantial operations in the UK, even if those presences may not always be their European headquarters, making it easier to establish connections with these potential customers in the UK than in other major European cities.

Employees based in the UK can benefit from tax-favorable programs relating to their equity grants. In particular, Israeli early stage startups that wish to issue stock options to their UK employees can utilize Enterprise Management Incentive (EMI) options, and other programs as the company grows. Especially at the early stage, accessing those benefits will be important to investors. To qualify, the startup must have at least one full time-person based in the UK.

With its huge market potential, geographical proximity to Israel, and similar time zones,it's no wonder that the UK and Europe are ready and waiting for Israeli startups.