Speaking with Michael Matias, Chen Sagiv explains how attitudes in the medical field have shifted in the last few years

TAGS:
Though she is making advances in the complicated world of deploying artificial intelligence in medicine, Chen Sagiv believes basic communication is still crucial for success. The co-founder and co-CEO of DeePathology shares that if she doesn’t listen to what doctors say they need, she won’t be able to provide meaningful solutions for them and their patients. Communication is also critical to helping suspicious doctors see the potential in delegating some tasks to AI, and Sagiv explains that attitudes in the medical field have shifted in the last few years. She believes there are so many big tasks to solve within the medical field, and many companies are needed to provide solutions. Her products need to integrate with other brands so physicians can get the most out of the advances in technology. This integration requires a cooperative ecosystem, which is part of Sagiv’s vision for improving lives with AI in medicine.

Chen, take me through your journey up until DeePathology.

I was born and raised in Israel. From when I was kid, I always loved mathematics. When I graduated from the army, I was deciding between physics, computer science, and medicine. I said, "I'm afraid of blood. I cannot harm anyone with physics.” I did my first and second degrees in physics. I was lucky enough to do my PhD in applied mathematics and in between work in Israel and the Netherlands in algorithms development in the medical domain.

My husband is from the more business-oriented field. We decided to join forces after raising twins. After you raised twins, you know, running a company is just much, much simpler. And this is true. We started SagivTech as a process company specializing in computer vision and GPU computing. Six or seven years ago, we really shifted our gears toward AI and computer vision. SagivTech was kind of an incubator to both DeePathology and SurgeonAI, which are both product companies.

When people hear the word pathology, they usually think about the pathologist investigating some kind of death or murder. I was also thinking that. But four years ago, when we started doing projects in digital pathology, I actually came to understand that pathology is actually the science which actually cherishes life.

When people go through biopsies, for example, the pathologist is actually looking at the biopsy to see whether there is cancer or an infectious disease to give the diagnosis, and also to recommend a treatment. The role of a pathologist is crucial in the diagnosis and in, actually, providing the right treatments. Also in pharma research, to evaluate the efficiency and the toxicity of new drugs, you also need to evaluate the biopsies.

All of this has been done in an analog way under the microscope where people were counting things. The introduction of digital pathology is actually a game changer. It's fascinating to see how digitization is invading so many fields in medicine. All of the medical data is being digitized. I think that this is a revolution which is as important as antibiotics, as vaccination. It's fascinating to be a part, a small part of, this fantastic revolution. 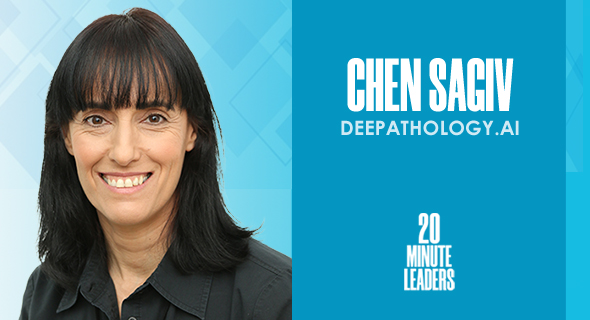 How is this revolution actually taking place? Where are we in it? What you're working on is actually the layer on top of the digitalization, right?

There's really a lot going on. The ecosystem for radiology, for pathology, and now for surgery, I think it's booming. Still, there is a gap between, I think, the state-of-the-art technology, which is just unbelievable, and what is happening in real life.

Bringing IT to the medical world is far from being trivial. IT still needs to make its way into the field. Most pathology labs in the world are still not digital. It involves a huge amount of money to change the way that things are being done. The doctors are really, I think, suspicious because they want to know that when they use a digital system, that what you see on the screen is actually what you see under the microscope. This is really fundamental. It's way before you apply any AI algorithms to it. To make a revolution, you really need to go with the medical doctors so that you are within their workflow. The digitization in the Western world’s pathology labs is still something that needs to be completed.

When it comes to laparoscopic surgeries, where the surgery is being done with the surgeon looking on the screen, nobody is archiving these videos, nobody is using them, not for AI, not for anything. Building a reasonable infrastructure in terms of archiving solutions, in terms of smart video summarization techniques—this is a fundamental infrastructure that is still being built.

Now, once you have a solid enough infrastructure, you can start thinking about algorithms: AI, computer vision, all this good stuff. I know so many companies, in Israel, the US, Scandinavia, and India, which are my competition but are part of a very thriving ecosystem. There are such huge tasks to be solved that no single company, even a large company, can actually provide solutions to all the problems that the medical profession has to offer. So, I strongly believe in an ecosystem that can communicate so that as a physician, all these solutions can interact with each other. My vision is not only to have great solutions for my own company, but to have solutions which are smart enough to integrate into an ecosystem.

The first thing is, I think, to really see these solutions as part of the routine work of the physicians. Our vision in DeePathology is to bring AI capabilities to the hands of the doctors. AI tools should be part of what pathologists, surgeons, or radiologists can actually work on, explore, investigate. The right way to move forward is to join forces between the AI experts and the domain experts. Working together can really bring meaningful results that you can actually implement in practice.

What is the balance like for you between you as a physician, an entrepreneur, a researcher, a visionary, and a pioneer in a field?

I think that moving toward balance is a life mission in so many levels: personal levels, professional levels. In order to really balance a lot of things, I strongly believe in communication. As somebody who is coming from mathematics and from algorithms, I need to really understand the problems, the language, the mind-set of the medical doctors. Otherwise, it doesn't make any sense to make a technology which is not rooted in real clinical needs.

On the other end, I strongly believe that clinicians should at least understand a little bit about the technology. They do need to understand the principles, the limitations, the way to evaluate things, and the way to be critical. Part of being an intelligent human is to listen to other humans and to really understand what they need and what will bring value. Because eventually, if you don't bring value to your customers, to patients, then you don't do anything meaningful.

Is artificial intelligence already making a dramatic impact on pathology and research today? Where are we at with this transformation?

I think artificial intelligence actually started to be meaningful in pathology four to five years ago when people started experimenting. I think that nowadays you see already a solid AI-based solution for diagnosis, and pharma companies are using AI to develop new drugs and to evaluate the clinical trials.

I think that four years ago, I talked to a lot of pathologists, and they were really reluctant and very suspicious. Nowadays, I think that they really see it as a decision support system that will allow them to get rid of the time-consuming, tedious, unpleasant tasks and really focus on the higher-level tasks. It's not only in the stage of early adopters; I think it's gradually entering the mainstream.

But when you look at poor countries, when you look at smaller hospitals, in order to jump onto the AI train, you need to invest a lot of money. This is why we need to build an ecosystem that is not only made of the small or large companies, but also the medical stakeholders and the countries, which should take care of the regulation and make an infrastructure because eventually, I believe, AI in the medical field will make us live longer, will make our life easier.

"It's not necessarily financial value. It's really value to the world.”
Recommended videos