TAGS:
In December 2019, Michael Reitblat (39) and Liron Damari (38) signed a lease for two stories on one of the new office towers in Tel Aviv. Forter, the company they set up together in 2013, was supposed to move into the 31-story Recital H-tower as early as 2020, but the Coronavirus halted everything. Just this past summer, in July, Forter, which specializes in identifying and preventing e-commerce fraud, unveiled its beautifully designed new floors. The celebrations, as is customary in the industry, were also beautiful and grand, but also presented a not-so-simple problem - the two floors were not enough to house the company's 200 employees in Israel. 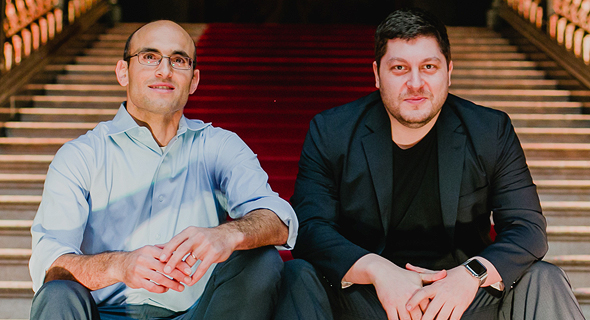 Forter founders Liron Damari (left) and Michael Reitblat. Photo: Avi Raul
And so, while the employees were celebrating, Damari and Reitblat were immersed in the search for new offices. Paradoxically, or not, in today’s real estate high-tech reality, and despite the fact the paint has not yet dried and the parking lot still looks like a construction site, there is no single free cubicle left that Forter could grab. JFrog, which went through an IPO in 2020 and is valued on the Nasdaq at $4 billion, is occupying several floors, and Snyk, which is currently raising funds at a valuation of $8.5 billion, is also spread over a few of floors. Meeting rooms in Ma'ale Adumim and Hatzor Haglilit How did two talented founders of a company that raised $300 million at a valuation of $3 billion last May not think about securing more space in advance? The pre-Corona reality did not foretell Forter's spike in business, and especially in value. At the time of signing the lease for the offices, Forter was just another start-up out of many in Israel, however, it did create intrigue thanks to an investment from Sequoia, the most respected venture capital fund in the world. Yet, the $50 million raised in 2018 was at a company value of about $300 million and the number of employees at the company stood at a few dozens. But as early as November 2020, amid the second wave of Covid, Forter became a unicorn with $125 million raised at a value of $1.2 billion before money, and six months later, its value doubled to $3 billion, making Forter one of Israel’s biggest privately-owned tech companies in terms of value. It currently employs 320 people. "No one will give up the floors he rents, everyone just wants more," Reitblat said in a special interview with Calcalist. This is Reitblat and Damari’s first joint interview, which, under Covid restrictions is conducted in a manner that neither side has experienced before. Reitblat and I are sitting on the 30th floor of a Tel Aviv office, while Damari, who is in the U.S., joins via Zoom. Ironically, Damari lives in Israel, while Reitblat relocated to the U.S. in 2015 during the beginning of Forter's heyday. And despite Forter’s rise, unlike many other companies, the founders find themselves debating whether it would be more convenient to hold this interview in the Ma’ale Adumim or Hatzor Haglilit conference rooms. Not very glamorous titles, but for Reitblat and Damari, who came from these two cities, the social message is important. "If everyone who lives in the periphery reads what is written in the newspapers today, they will not even try to get into high-tech. We want to prove that you can make it even if you come from Hatzor, Ma’ale Adumim, or Kfar Yona, like Alon Shemesh, Forter’s third founder who has since left,” Reitblat said. How did an immigrant from Russia from Ma'ale Adumim and a religious kid from Hatzor Haglilit grow to be worth more than a billion shekels? "I wear the same shirt, sit in the same chair and eat from the same plate," Damari laughed. “While it is important to remember that valuation and net worth are not always the same, but yes, I am the example because I was just this nerd, and success for me meant heading a small law firm in Israel’s north. That is why it is so important to show what success in high-tech looks like so that the children in the periphery know what to dream about." 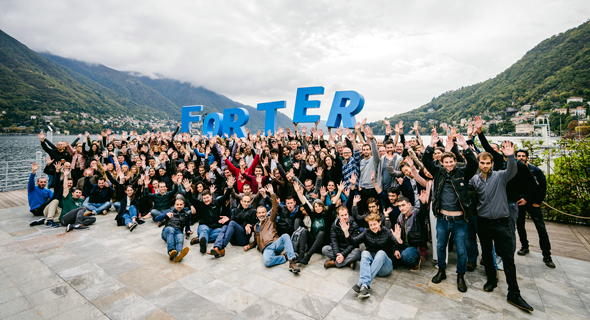 Forter employees. Photo: Avi Raul
"I generally do not think there is such a thing as a periphery in Israel. Our office in London is farther away for most employees than the distance between Tel Aviv and Beer Sheva. However the main issue preventing the tech workforce to scale from 10% to 30% isn't programming nor math, it is English. Israeli companies have an advantage over US or European ones since due to the small local market here they must be global immediately, but for that you need to know English." The realistic conservative and the fantasizing technologist The two met at 15, but it is not like they came up with the idea for a startup back in high school. The long-standing acquaintance, which is unusual even in Israel, where everyone knows everyone, is indeed evident in their body language and their communication, in their perfect coordination and clear role assignment. Reitblat is the visionary, he is the fantasizing technologist. Damari is the practical conservative who pulls Reitblat back to the ground when necessary. Reitblat is the one giving presentations to investors, getting them excited about the company’s future, while Damari faces the employees. Reitblat served as an officer at an Intelligence technology unit, a common stop on the Israeli start-up entrepreneur road. Damari, on the other hand, who wears a kippah, followed his service at the Intelligence Directorate with a Master’s degree in philosophy.

"Unlike Michael, I was not a computer guy in high school," Damari recalled. “When I joined the military I did not have a connection to technology, but a friend offered me to join a start-up to pay for school.” Reitblat stood out in the army and right after his service, he received an offer from to join Imperva, a cyber company founded by Shlomo Kramer after leaving Check Point. From Imperva, Reitblat eventually arrived at Fraud Sciences which was sold to PayPal for $169 million in 2008, Damari joined the company too, which became arguably, Forter's spiritual mother.

Four years after the PayPal deal, and about 15 years after they first met, Shemesh, Damari, and Reitblat went on a trip to the U.S. as the three were at a certain crossroads. “Liron was debating whether to accept an offer to work for PayPal Israel, but at the end of the trip we decided to make the leap," Reitblat recalled. "I got the ok from the family to work six months without a salary," Damari added. Could you imagine that in less than ten years you would be worth $3 billion? "We are still away from ten years for the company," Reitblat insisted. "We officially started in 2013 and by 2023 we will be far over the $3 billion valuation. I just showed someone the deck we made for Sequoia when we did our first $3 million round - then the entire US eCommerce market was $250 billion per year and now in the last year just at Forter we have handled over $250 billion. And that amount is just a fraction of what it would be in five years." 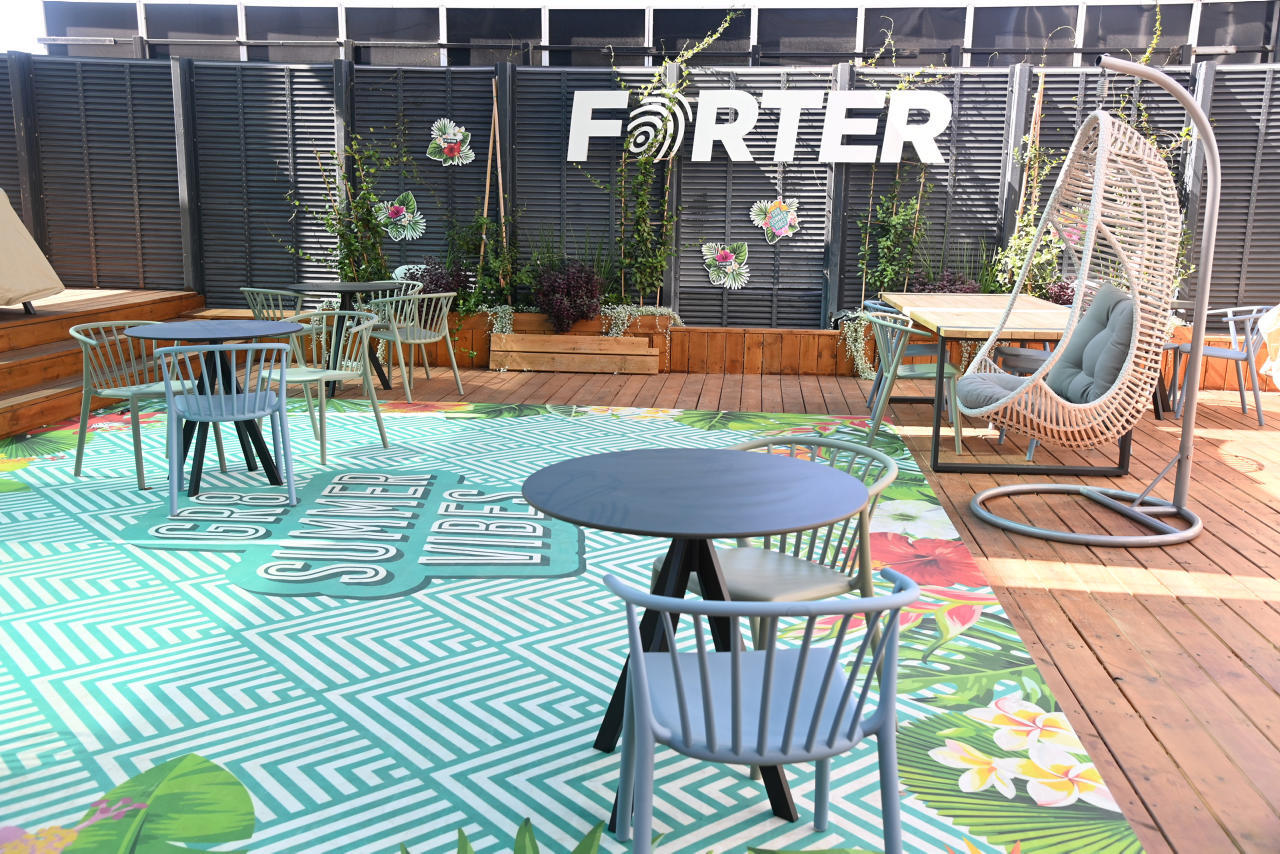