"It's not necessarily financial value. It's really value to the world.”

TAGS:
For much of his life, Lotan Levkowitz felt like a misfit. He didn’t enjoy school, but he found belonging and value during his time in the military, which helped him see the possibilities in life. Afterward, he tried many careers without finding the right fit. But Levkowitz shares that this non-linear path and feeling a little bit different has been an advantage in his time as a venture capitalist. He has been drawn to startups that are non-traditional in some way, and he is seeing success by going off the beaten path as a general partner at Grove Ventures. He says much of his time is spent reading and creating connections that may later help a founder get their company off the ground. Levkowitz explains that Grove’s values are to put people first and create value: not just financial value, but positive change in the world. Click Here For More 20MinuteLeaders

Who is Lotan? How do you end up in venture capital?

It was pure luck and coincidence. I started as a very geeky kid with my computer. Then I got into the Israeli Air Force Intelligence inside 8200. It really opened my brain because I didn't like my school years that much. But then I saw a way to do whatever I wanted in a way. I think that was a very transformational moment because I knew that if I really work hard and I have passion, I can actually do something.

What made you really understand that if you're passionate about something then you don't have to go the traditional route?

I was very fortunate to be in a small unit inside of the very big intelligence base of 8200. We were like a small startup: it was only up to us to create value for our customers, which was the Air Force. We built some systems; we generated some very good intelligence. We actually made a dent. That was a very self-fulfilling and phenomenal experience. I think that in the regular school days, I was quite bored or didn't feel like I fit in. There, I really felt at home.

I was like a bit of a misfit in many places. I said, “If technology is not for me, I'll do something else." I went to law school. I tried business school. I worked as a bartender. I worked in Israeli Knesset. I did consulting. Then I went to technology, but from the business side. It was fascinating.

I think the most transformational event was when I met a legend, someone I really admired, Dov Moran. We had good chemistry. He asked me to work for him. I've been very tightly coupled with Dov in the last decade. I told Dov, "Maybe we should start a VC fund." He made me his partner, and this is how we started Grove. It was not a linear way. I didn't know what I was going to do so I had to learn different stuff. I had to look at the reality from different angles. That got me to where I am today.

Grove is one of the most prominent venture capital funds in Israel. But what does it mean to you personally as an investor?

From day one, I realized that I'm not the most experienced, I'm not the smartest, I'm not the luckiest, so the only thing I can be is different. I thought, "If I'm going to have a belief about the reality, about the future, which is a bit different than others, then maybe I can be successful if I'm right." What we tried to do in early-stage, to be the first very good partners of founders, is about having your belief about the future and helping entrepreneurs try to get there. For me, being a good venture capitalist is getting the best teams you can find and try to help them to remove obstacles and create that reality, to create the future. 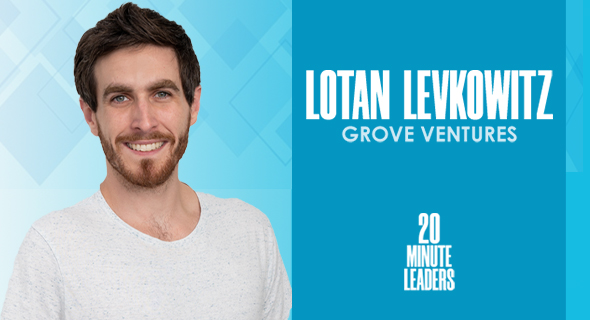 What are some of the bigger things that you've seen transform in the ecosystem and where are we at today?

When we started Grove, we saw the Israeli ecosystem with much less money and investors. We saw the same themes coming over and over again. We thought, "Maybe we can bring new things to the table." We saw that the world is going through a digital transformation. We saw that the infrastructure, the cloud, new types of microservices, API economies coming and changing the whole way the infrastructure is actually being built. We saw that everything around data analytics is coming. We saw that the combination is actually going to transform a lot of the fundamentals of our world where most of the GDP is, manufacturing, supply chain, healthcare. Not a lot of the innovation is actually being coupled with these industries.

This is what Grove believed from day one: that we want to be part of the digital transformation of these industries or invest in the infrastructure that's going to enable this transformation. When we started, we talked about, for example, semiconductors. Investors that we talked with said, "Semiconductors are in the past." But what we see now it's coming back.

What do you have to do as an investor to either prepare yourself to be able to support the right teams to go about this mission to make a huge dent in supply chains or the fundamentals of our daily lives?

Having a prepared mind is reading a lot, meeting a lot of people, and building your network within these industries. A lot of my time is dedicated to building our network and relationships within these target markets. It really enables us to help young entrepreneurs to knock on these doors and be part of this relationship and these ideation phases. I think it gets us to be sometimes more brave early on.

For example, I invested in a company called ActiveFence in trust and safety. When I met ActiveFence, they had a solid idea of how the future is going to emerge. We had to go and find these very early customers. We went as part of the due diligence and gathered the big tech companies, got them to the table, and validated their need. Eventually, these became very fundamental customers for the company.

What can we expect in the next few years? What can young venture capitalists start thinking about as they’re considering where we're headed?

I think that as long as you're going to have the right people—smart, passionate, driven, with the right set of values—they can build the companies that are going to define the future. There's enough ideas for everyone. There is enough passion for everyone. It's about knowing how to be a bit different and staying like one step remote from the herd, and then try to actually invest in new markets, opportunities, and needs.

How does that connect to "Lotan, the misfit" from before?

I think all of my companies are very different. ActiveFence just announced a hundred million dollar round two and a half years after establishment. RapidAPI, where we were the first investors, and Iddo Gino: when we invested, he was 16 and a half years old. That's different.

We said, "If we're going to be different, we might fail with our faces in the puddle of mud. And if we succeed, it's going to be huge." I think having this misfit background is an advantage, not a disadvantage, that really directs the way I'm being as a venture capitalist. I'm very lucky I'm surrounded by 15 amazing people in Grove.

What gets you up in the morning?

When we started Grove, we defined two core values. The first one is "people first." And to "create value." It's not necessarily financial value. It’s leaving the world a bit better than how I found it. And the people around me, my partners, the people on our team, the founders and their teams, that's really what gets me up.

If I were to ask your founders or Dov what defines you, what would be some of those words?

Very driven, like relentless. Thoughtful. I spend a lot of my time reading and learning and not sleeping a lot. And being positive and happy. That will get you through all the difficulties of life.

“I think that one of the best things that happened to this company is that we were overfunded at the beginning.”
Recommended videos