Omer Keilaf, CEO and co-founder of Innoviz Technologies, talks to Michael Matias about his vision of machines being safer than humans when operating on our roads

TAGS:
Omer Keilaf knew he wanted to be an entrepreneur, and he had many startup ideas, but he was looking for one that drew on his technology background and that filled a critical need. He discovered the lifesaving potential of autonomous vehicles and co-founded Innoviz Technologies to help make driving safer. Keilaf shares that his older sister was severely injured in a car accident when he was a child, so he knows how hard it is on a family to experience that kind of trauma. Eventually, machines will be safer drivers than humans, he says. Though many companies have been working on this problem, Keilaf explains that the overfunding Innoviz experienced early on enabled them to take more risks because they were not afraid to fail. But he also advises others not to overshoot and pursue a solution that takes so long to develop that you get discouraged. Click Here For More 20MinuteLeaders What led to your conviction that Innovis is a company that you want to build?

When I was looking to start my own company, I had more than one idea. I always knew that I would pick a certain path where I'd become an entrepreneur. I was in unit 81, which is a very technical, very inspiring place and very creative. It's always about bringing very new technologies in a very short time. The slogan is about capabilities, passion, and commitment. That's exactly what I was looking for. When I started a new company myself, I was looking for something that I can do that can actually bring everything all together. Once you are engaged with a technology that is lifesaving and you know how critical it is, it really connects everything.

Tell me about it being lifesaving.

Every day, we drive somewhere because we have to. It's part of our life. Basically, that is still possibly the most risky action you do on a daily basis. We know that it's a risk. We feel it less. But 80% or 90% of the accidents are still caused by humans. That's a problem that could be solved. The technology is available now.

My older sister got into a very serious accident when I was a kid, and it completely changed the life of my family. She was in the hospital for a year and a half. When you see what happens when someone is injured and how it affects so many people, we have to solve it. Corona changed our lives, and everybody was not accepting it. But we've actually accepted, for a hundred years now, that it's okay that every year you have two million people killed and between 10 million and 50 million people injured every year.

I want people to say, "I don't need to drive anymore because it's safer." Eventually, machines will be able to drive much better than the driver. It's almost there. 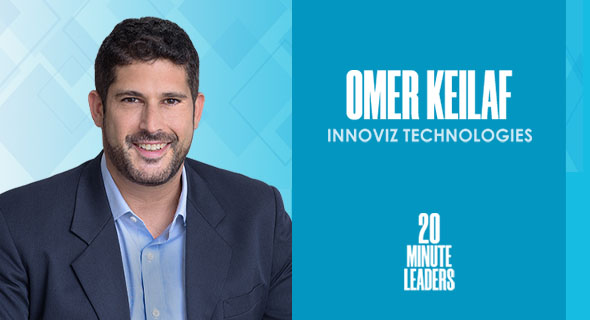 As you started out, what is the goal you wanted to achieve?

Another thing that drew me to this startup is I was looking to do something that I thought that I have some personal advantage in for my background. We started Innoviz, and we raised money quite quickly based on the backgrounds of the founders and really a growing market. We didn't have a real opportunity to talk with our customer. Companies like GM and BMW, you will never get access to talk with them. We thought that if we make the existing technology smaller and cheaper, we will solve the problem.

But once we started to talk with customers—when we were funded and VCs opened up doors—they said, "The existing technology is too expensive. But it's not good enough. We're looking for technology to solve something much more difficult.” It was almost three orders of magnitude more difficult. We were shocked at how far what we were thinking was from what the market really needed.

A startup needs to make a decision on what product to develop. But it's also very important to understand when. If you have a sense of urgency, and you need to bring something to market next year, it leaves you a certain amount of time to develop. But if you understand that for autonomous driving, it's actually further ahead, you can plan differently. You can go into a deeper, longer path in developing the right technology. You should also be aware that you shouldn't take too high of a risk because you might try to develop something that is not possible to solve or will take 20 years.

How do you balance being a core engineer and being CEO and having to sell and partner with complicated organizations?

First off, we are in an industry that is very technical. My customers are optical engineers and AI engineers. You need to speak their language. When they meet a CEO that is only marketing, you won't go through. You have to understand their needs. Once you are solving something they care about, you start to create those engagements.

BMW is our first customer. They chose us for series production early on. They chose us because they believed in our strategy. They chose us after a year of due diligence. Now, we already have the product. We're working on our second generation; it's 30 times better than this one.

What does this do to the company culture when your engineers get this approval in a massive due diligence process from BMW?

I think that one of the best things that happened to this company is that we were overfunded at the beginning. I was looking to raise $750,000. I closed the round at $9 million. You can imagine that it allowed us to do more.

Since we have more ability, we are going to make a bet on a technology, something more risky in terms of whether it will work eventually. When you have a good engineering practice, you're not really making bets; you're just taking more risk. After one year, we were able to bring a technology that was better than many companies working for years before us. It was because we were not afraid to fail. We had nothing to lose.

Allowing yourself to fail is the secret sauce because you experiment. You only learn from failing. You don't learn from successes. When you lose or you fail and you try to understand what went wrong, then you find a way to solve it.

This is why the investors wanted to be part of this vision. You were saying, "I'm going for the moonshot. I think I can succeed. But we might fail."

There were companies that were shooting for the moon, and five years later, they had another 15 years ahead of them and they decided to stop. You also have to be practical. You shouldn't overshoot because you can go into a tunnel and never go out. You still need to be in discussion and access the market with a product and improve it. You need to find the right fit. That's a dialogue you continuously do with the market and understanding what things you need to change. Being a startup is about taking risks, but managing them. Taking risks is just one part. Managing those risks is the more important one.

This small device, what is it?

It's very cool. There are really a lot of technologies that we have to develop here. It's an optical sensor, actually. When we started, there was a lot of confusion about the right way to solve this problem. Eventually, you have to be very careful with the pricing because automotive is super sensitive to pricing. That's the market. You need to understand the “willingness to pay” of your customers. You can miss it slightly, and it just doesn't pass. In every car company, there are commercial engineers who calculate the willingness of people to pay for a certain feature. If it's beyond that, they will not do it. They will wait until it is affordable.

We understood what kind of technologies could eventually allow us to get there. There was nothing on the shelf. We had to develop the entire chip set that allowed us to do a good LiDAR. We had to go into very deep layers of physics.

We have three chips that we designed here. In the following generation, there is another one. InnovizOne, which was designed for BMW primarily, was under a very clear mind-set of a certain timeline. It's no longer like research. You're going to production. But meanwhile, there are teams that are continuously working on the next generation. The InnovizTwo is not only 30 times better, but also with 70% cost reduction. It's allowing us to be very competitive in even lower-grade cars.

Were you an engineer before unit 81, in your mind-set?

I was always very technical. I taught myself coding, and I enjoyed it very much. I actually went to study electric engineering. I really love technologies that are very multidisciplinary where I can actually try to solve a problem in many ways and find the right fit between them. I think part of this also requires a very strong collaboration between the team because such components will not talk with each other if people won't.

If you had to choose a few words to describe yourself, what would they be?

I am a combination of vision and paranoid. I'm always trying to understand what can go wrong. I'm a problem-solver. I never go to sleep before I solve a problem. If I can't find a good problem to solve, I play Sudoku or something. I always think further away, like where I want to be. Even now, I have ideas of where I want to bring this company forward.

“Almost everything I did in my career, it had to do with asking questions.”
Recommended videos