The numerous Israeli companies to go public over the past year have discovered that the public market is far less forgiving than the private one, and their drop in valuation has also served as a warning sign to other unicorns

TAGS:
"The private market isn't synchronized with the public market." That sentence is being repeated more and more in conversations with tech entrepreneurs and executives, and came up again in a conference call held by gaming company Playtika on Wednesday following the release of its disappointing financial report for the third quarter of 2021. This report resulted in the company's market cap plummeting by 22% to below its IPO valuation of $11 billion.

Playtika shares reached their average daily volume within the first hour of trading on Wednesday as investors tried to get rid of stock of a company that is only experiencing single-digit growth. Playtika's results for the third quarter were disappointing, both from a revenue and a profit standpoint, and also resulted in the company lowering its annual projections. 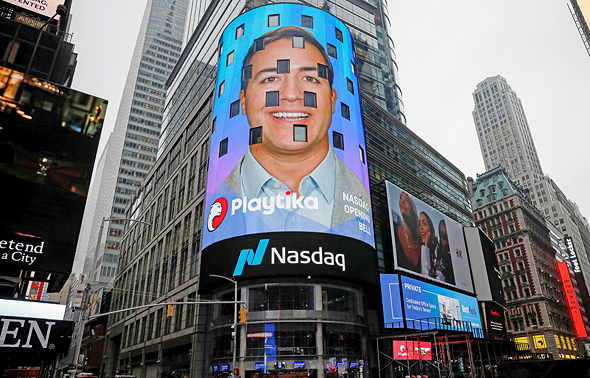 Playtika on Nasdaq. Photo: Reuters
The company, which went public in February, reported third-quarter revenue of $635.9 million compared to $613.3 million in the prior-year period. However, analysts were expecting revenue of $664 million. Net income was $80.5 million, a big drop compared to $119.9 million in the prior-year period. For the full year, the company anticipates revenue of $2.57 billion, which would mean just 8% growth and is well below the expected $2.65 billion. Video creation and distribution company Kaltura also experienced a similar fate this week, with its shares dropping 17% and market cap falling to around $1 billion, below its IPO valuation of $1.3 billion from three months ago. This came on the back of its disappointing projections for the fourth quarter for revenue of $43 million, the same as it registered in the third quarter.

Most Israeli companies that went public this year via a traditional IPO (initial public offering) - and not just those that opted for a controversial SPAC (special purpose acquisition company) merger - are currently being traded below their IPO valuations. The exceptions are SentinelOne, monday.com, and Global-e, which have to date succeeded in maintaining the phenomenal growth rates they displayed prior to coming to Wall Street.

This is exactly the place in which the lack of synchronicity between the private and public markets can be seen. While valuations on the private market have never been higher, and more and more startups are becoming unicorns and even decacorns, the public market isn’t as excited when it comes to young tech companies. This isn't just relevant to Israeli companies but is rather a general sentiment being displayed by Wall Street towards these new public companies, which this year mainly came from the tech sector.

While the S&P 500 has already climbed by 24% since the start of the year, the index measuring the return on newly-public companies has seen an increase of just 6.9%.

How do you explain this gap which turns an IPO into something that may not be worthwhile for unicorns? In the current reality in which massive VCs are raising new funds of billions of dollars to invest in tech companies, going public may not necessarily be necessary. You can raise a lot of money in the private market and do so much faster than through an IPO, even in the case of a SPAC merger, which takes an average of six or more months to complete, much like a regular offering.

All the while, VCs like Tiger Global, Insight Partners, and General Atlantic present offer sheets within a few weeks, often with higher valuations. The reason for this is the high sums these funds receive from their investors, who expect their money to go to work. As a result, the funds are quick to invest money in companies that are raising $250 million or even $400 million, even though they have only begun to record revenue. However, the real headache for the newly-public companies begins after they hit the market and when they need to present their financial reports. Many successful tech companies that went public this year experienced this time and again over recent months. Riskified, for example, saw its share price plummet two months ago after releasing disappointing results, with its market cap falling to around $3 billion, below its IPO valuation of $3.3 billion, after already hitting $6 billion thanks to an initial surge.

With the markets at record highs and tech companies going public based on promises for accelerated growth, investor expectations are as high as the companies' multipliers. There is no room for error or for the single-digit growth displayed by Playtika, which has become the poster boy for reward and punishment on the stock market. These types of events also occur to private companies, but that world doesn't accommodate the public investors of the Wall Street universe in which there are numerous alternatives for investment.
Related articles:
In private companies, that usually remain so exactly due to the fact that they aren't able to display consistent growth over time, VC funds can soak up a few mediocre or even disappointing quarters. If worse comes to worst, they just won't rush to hold another funding round in order to avoid their great fear of experiencing a down round in which the company's valuation has dropped. However, there are no days of grace on Wall Street and over the coming weeks the expectations from other tech companies will be for something "amazing". The volatility in the share price of the newly-public companies also acts as a warning sign for other companies that are considering an IPO. They should probably remain patient and private, not just because of the ease at which they can raise funds, but also because some of the unicorns that went public did so too early before they were experienced enough in managing projections and expectations of investors. Going back to Playtika, a more experienced public company would have known that in such a case in which it is set to miss analyst projections by so much it would have been better to release a profit warning that would help soften the blow from the disappointing investors rather than blindside them with a quarterly report.