“Bezos, Musk, and Branson have high-level plans for space; so do we”

“The satellite industry is moving from a niche industry to center-stage,” says Dubi Lever, CTO of Gilat Satellite Networks, an Israeli provider of satellite-based broadband communications systems that is bringing about the next-generation of digital satellites

TAGS:
Although they hover far above the atmosphere, satellites have countless practical uses in our everyday lives, whether for TV Broadcasting, communications, navigation, or imaging. Today, many rely on satellites for communicating in rural areas whether on ground or sea. Gilat Satellite Networks, an Israeli satellite communications ground segment provider, has so far connected 1.7 million terminals around the world to provide internet. And it’s latest focus? Providing inflight connectivity, connecting 4G cell towers, enabling communications for ships at sea, and more, noted Dubi Lever, CTO of Gilat in an interview with CTech. Lever has been with the company for over two decades, and has seen the industry evolve and expand to additional markets. “People used to think that the satellite industry was just a niche industry, but now it’s become center-stage,” he said. “Most satellites are of the GEO (geostationary) variety that orbit about 36,000 km (22,200 miles) above the Earth’s atmosphere and used for communications, but we’re now seeing an explosion of non-geostationary satellite constellations. We aspire to provide global connectivity. Jeff Bezos, Elon Musk, and Richard Branson have some high-level plans, and there are a lot of investments and plans for going into space, but we’re also very well-positioned and prepared for the NewSpace era,” Lever added. 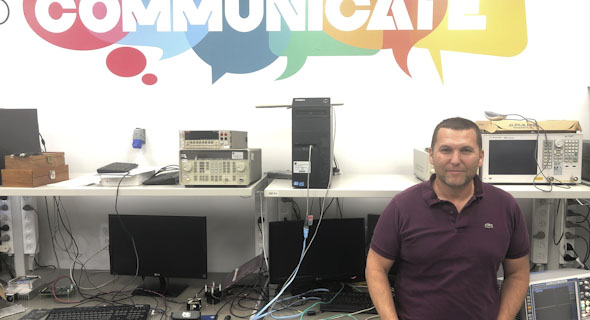 Dubi Lever, CTO of Gilat Satellite Networks at the company's Petach Tikva offices. Photo: Gilat
Not to be confused with Gilat Telecom, an offshoot that provides broadband services, Gilat Satellite Networks designs and manufactures the ground segment for communication satellites. The company was established in 1987, and went public on the Tel Aviv Stock Exchange and then the Nasdaq in 1992. Today, it employs over 1,000 people worldwide, including at its headquarters in Petach Tikva, where it develops satellite modems. It also has a subsidiary in the U.S., WaveStream Corp., which develops high power amplifiers for transmitting high powered signals from satellite gateways. In addition, Gilat designs flat panel antennas for mobile applications and communications-on-the-move. It also provides equipment for consumer internet to homes in France, the U.K., and Russia. The company builds central stations, termed “hubs” and remote terminals that connect through satellites to the hubs. That equipment is split between gateways where modems, antennas, and amplifiers are installed; data centers where data processing such as encryption and compression is implemented; and Network Operating Systems (NOC) where Network Management Systems (NMS) are installed. Enabling phone calls from space and inflight WiFi

While traditional cellular connectivity demands companies install cellular towers in different areas by deploying fiber optics cables, doing so in rural areas is difficult: laying down fibers is costly and takes time. As an alternative, Gilat enables cellular backhauling, which connects cell site air interfaces to wireline networks that connect to data centers, enabling phone users to access content and applications accessed by mobile users. Currently, it provides cellular backhauling over satellite to all mobile network operators in Japan, working with SoftBank, NTT Docomo Inc, KDDI, and Rakuten. In the U.K., it cooperates with British Telecom and with T-Mobile in the U.S.

“Satellite connectivity can be done within days,” Lever said, “and our greatest challenge with providing 4G was to ensure that users had high speeds for broadband connectivity, and high quality voice calls.” The company’s satellite services enable high voice quality when making phone calls in the air. “People would think that the quality of a voice call - which travels up to a satellite located 36,000 km in space and then back to Earth - would be unpleasant but we’ve proved them wrong,” he said. 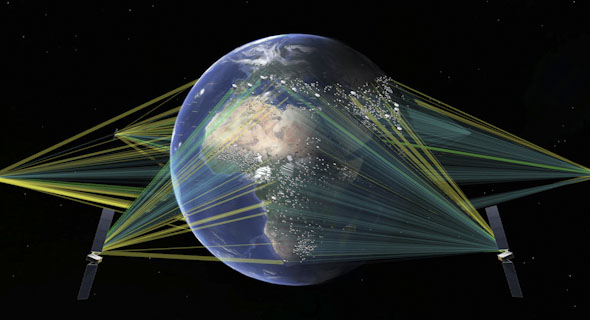 Gilat's segments operate in satellites in various constellations hovering above the Earth (illustration). Photo: SES
Disaster relief backup Satellite operations are important to our everyday lives, explained Lever, since they can enable communications in remote locations. “If hikers are on a trek in the desert and in distress, they need to be able to alert authorities,” Lever continued, “but the farther away you move from main roads, the more likely you are to lose cell service connectivity.” Satellite terminals can be dropped in remote areas, such as nature reserves, enabling people to connect to a local modem with their cellphones, and help alert rescue services. “Israel is a small country, and that’s why we’ve got pretty good infrastructure in terms of connectivity. There are still some ‘black spots’ or areas where people lose coverage, like on the way to Eilat or in Judea and Samaria,” he noted. Potential applications for a local Israeli satellite network are vast. A local satellite network could solve problems such as enabling remote learning during the Covid-19 pandemic for Bedouin nomadic communities, assisting civilians and the military driving through areas prone to terrorist attacks by enabling them to call for support when needed, or interacting with cameras at rail and road intersections that can monitor traffic and roadside assistance. Lever noted that such a network was recently set up, but the terminals haven’t been deployed yet. Global warming is another area where satellite communications are paramount. The growing number of hurricanes, forest fires, or tornadoes caused indirectly by global warming and other effects on the climate, have impacted local cell phone infrastructure. “A lot of these storms, such as severe flooding in the U.K., leave a lot of terrestrial cell phone infrastructure damaged, and that’s why having satellite backup is essential,” Lever said. He recalled that Japan has partnered with Gilat to provide satellite backup coverage in the event of natural disasters, such as earthquakes and tsunamis. “Our dependency on communications is so high, and due to global warming the potential exposure of terrestrial infrastructure to damage exists,” he said, adding that while satellite services cannot replace terrestrial terminals in terms of speed, it’s wise to have them as backup. Next-generation satellites operating at super-speeds

Currently, many companies have different types of satellite constellations floating above the Earth’s atmosphere at varying altitudes for different purposes. MEO constellations hover at medium-Earth orbit some 8000 km (4900 miles) above the atmosphere, can operate with less than 10 satellites for global connectivity. LEO (lower-Earth orbit) satellites hover at a distance of between 500 km-1500 km (310-930 miles), and need anywhere from several hundreds of satellites to tens of thousands to provide global coverage for broadband communications.

While there aren’t a lot of operational MEO satellites today, Gilat recently partnered with SES (Société Européenne des Satellites), a large Luxembourg-based satellite operator to develop a ground segment for its next-generation offering, which will be launched to space in 2022, termed mPOWER. MEO satellites can provide connectivity in remote areas where laying fibers isn’t feasible, such as for maritime operations at sea, like cruise ships. “You can’t exactly lay cables that connect to ships,” Lever said, but noted that Gilat enables connectivity for military applications, cruise ships, fishing vessels, merchant ships, and more.

And the company has far-reaching aspirations around the world, to help connect remote regions. In non-satellite related news, recently Gilat signed agreements valued at $16 million to operate regional transport-networks to support terrestrial connectivity over fiber and WiFi to mountainous regions in Peru. 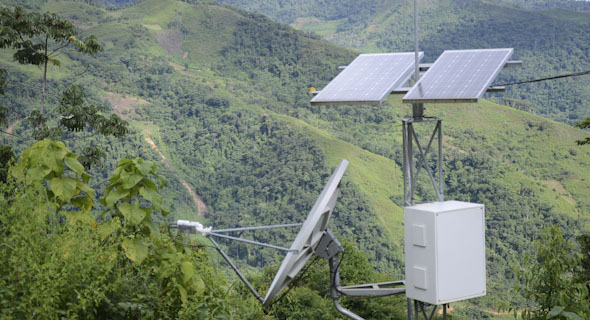 Gilat signed a deal to work with local providers and streamline broadband to mountainous regions of Peru. Photo: Gilat
Spotlight on the Israeli space tech ecosystem Lever believes that Israel’s uniqueness in terms of its growing space tech ecosystem stems from its innovative mindset, as well as its flexibility and adaptability. “We know how to innovate. Many people in this industry have served in different military units, and have this DNA instilled in them to solve problems, no matter how hard. We’re also very flexible and hard-working,” he said. In the satellite equipment market, most of the major players are U.S. companies, he recalled, such as ViaSat Inc., Hughes Network Systems, and ST Engineering iDirect. “And then there’s Gilat: we’re agile, customer-oriented, and know how to do a lot with very little.”

Unlike its European counterparts, which are part of the European Space Agency and receive governmental support and funding, Israel does not partake in this exclusive club. Lever believes that this factor makes Israeli companies strive to work harder to offer more solutions, services, and innovate better. “Gilat,” he added, “is a one-stop shop for all needs for ground satellite segments for satellite communications, and we bring more to the table than meets the eye.” So what’s next on the horizon? The company plans on offering its next-generation satellite platform that is more dynamic and uses cutting-edge technology in terms of processing power. Next-gen satellites will be software-defined, and able to change coverage and power distribution within minutes, with enormous capacities of transmitting up to 1 terabit of data per second. “As satellites go-digital, we’re getting closer to the future.”