“Everyone came with a different background, and together we really made a really strong team.”

While Beach Bum has had some big milestones as a company, co-founder and COO Keren Marom says that celebrating the small wins is important as well

TAGS:
While Beach Bum has had some big milestones as a company, co-founder and COO Keren Marom says that celebrating the small wins is important as well. She shares that the pace at the casual gaming studio can be very fast, so stopping to acknowledge these milestones is key. The founding team all had different backgrounds and experience, and that variety contributed to their success, she explains. As the company has grown, Marom has tried to remain focused on the culture and atmosphere so that each employee feels taken care of, which also makes the business stronger. Though she says she has not always had a passion for entrepreneurship, that inclination has grown throughout her career, which was previously focused on marketing. Marom finds it exciting to create new things and see the impact of her work.

If you're thinking through your own career and trajectory, how do you define it?

I think of where I came from. I'm American. I moved to Israel at the age of 22. I was searching for myself. It's very hard at that point to know what you really want to do. I decided to jump into marketing. I started off in high-tech, but offline marketing. When you can't really measure things, it's more frustrating.

What does "offline marketing" mean?

More like a conference where you're proactively selling, and it's less measurable. It’s also going to different companies trying B2B, but not through the typical online channels.

After that, I felt like it was time to move on. I joined a company where I was the first employee, Matomy. I was there for 10 years. It's really nice to be on the media side, but I was ready to go to the product side and really feel the actual marketing activity and see the entire funnel.

I joined Beach Bum in 2015, where it was just an idea that Gigi and Uri had of going into head to head games in the traditional board games sector. We really took the excitement of social games, and we brought them into the traditional offline games in a digital version. 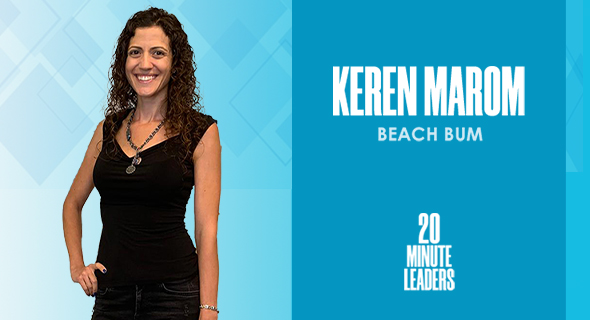 If we're looking back at 2015, how did you create your thesis?

The thesis is that there are so many games companies out there that are profitable. And they don't have nearly the excitement or the user experience as other gaming that we all know and love. We revived them in a way that made it more than just the backgammon game. You go into this whole ecosystem where you have the whole gaming experience. Most of these games are versus a computer, so you lose the excitement of the social channel and playing against your friends. That was the number one request before we had the "play with friends" feature. We really wanted to take advantage of that niche and run forward.

What is the role of the chief revenue officer at that moment? How do you know which KPIs to set?

When I first started out, it was really running the business side: making sure that we maximize the revenue, that we can really find ways to bring the return on ad spend quicker, see the whole funnel of users, how we can analyze things and boost retention. It's just like any other app: you want to keep the users for as long as you can. The retention of these games is very high over the long run. We have users from 2016 who are still in the app and even more active.

The role at the time was really monitoring the whole function of the game: seeing the game economy, seeing the user flow, making sure the CRM side is interesting enough for users to keep going with us, connecting between the tech and the marketing. Over time, that position definitely evolved. We've become more savvy on the analytics side and many different areas. Everyone came with a different background and a different history so that together we made up a really strong team.

What did the day-to-day look like for a co-founder and CRO of a gaming company in 2015?

I'm a very fast paced individual. I like being super busy. Going into a startup again is a very different pace. On one hand, you want to run really fast. On the other hand, you're dependent on the product being live in order for you to actually have the job to do. In the very beginning, it was just setting up the infrastructure: getting ready to market things, getting ready with the user experience. You're just waiting for this baby to be born.

You're an all-around player at that time. We knew the core roles that we needed to fill. Much of my time went toward HR and building the team. Basically, you're just running in any direction where you are just looking forward at the vision and what will help you get there.

If you're looking back, what are some of the big milestones for Beach Bum? How did you experience them?

Number one would be the team coming together. It was Uri and Gigi’s starting point bringing us on board: myself, Shachar, and Gil. We basically got the authority to run forward and make it work. A milestone was actually bringing the outsource technology in-house.

Additional milestones are definitely the investments. In gaming, you could be very profitable if you don't do marketing. But you're not looking necessarily for the long-term. So when you see that you can return a certain percentage of the marketing spend within a few months, then you just want to run. So you need to get more fuel.

Every game launch is a milestone, and it's an exciting day. We try to make milestones of the small wins. With all of our running, we need to really stop and enjoy every time we hit a new target or a new peak in revenue. Obviously, the acquisition is a huge milestone we're really proud of.

What happened during those days when you were releasing games?

It was really exciting. In the beginning, we would set up head-to-head. You want to have many people in the game, so we would just sit and play. We'd get very excited when we saw friends come online and we would play against them.

Besides that, it was just really the excitement of seeing it actually pan out, seeing them go through every KPI, playing the game, sticking to the game. When we had someone purchasing and they put in five dollars, we got so excited. It's just really seeing everything you've been working towards happen.

If you're looking back, what were some things that you learned about leadership that you didn't really expect?

I learned that, first of all, it's important to be an all-around player in the beginning. Over time, it's really important to delegate and find the right people who have the responsibility over every single field.

In the growth from a startup to a larger company, if you asked me the most fun, it's the startups phase. When you go into the corporate world, you really need to consider how to maintain the company's culture, vibes, and family atmosphere even as you grow. And how you take care of every single employee because the employees are really what makes the company.

Was that a topic of conversation: how to retain the culture and the mindset as you're growing?

Definitely. We brought an organizational consultant when we got to about 110 people. I was trying to keep us in this small atmosphere where you walk in saying good morning, you meet people at the coffee area, and you get excited to sit for lunch with different people. I think it's really nice to be a tight-knit company. I also think that as a tight knit company, things run faster.

Was this entrepreneurial bug always a part of you?

I think I acquired it over time. In Matomy, I enjoyed it mostly when we were small. I also opened the China branch and an India branch, and that was the excitement of really building something and seeing the impact. There's nothing more rewarding than looking back and seeing what you've done, and also knowing that it can get so much bigger. There's a great deal of excitement in creating.