Trax has been preparing for an IPO for over a year, securing $640 million in a Series E financing round in April of 2021

TAGS:
Retail analytics company Trax Image Recognition is preparing to go public on Nasdaq around June-July of this year at a company valuation of $3-3.5 billion. Calcalist has learned that American multinational law firm Latham & Watkins LLP is currently preparing Trax’s IPO prospectus with the plan to file it with the U.S. Securities and Exchange Commission in the coming weeks. Goldman Sachs was selected to lead the offering. Trax has been preparing for an IPO for over a year, with some experts predicting that it might go public already in 2021 after securing $640 million in a Series E financing round in April of last year led by SoftBank Vision Fund 2 and technology-focused funds managed by existing investor BlackRock. It coincided with the company canceling a deal to acquire a competing U.S. firm for around $200 million. 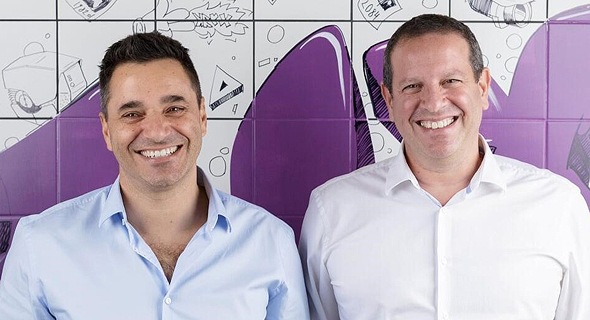 Trax founders Dror Feldheim (left) and Joel Bar-El. Photo: PR
Trax was valued at $2.4 billion in its latest round, which also saw participation from new investors including OMERS, one of Canada’s largest defined benefit pension plans, and Sony Innovation Fund by IGV. The company didn’t specify the division between the primary and secondary investments in the Series E, but according to Calcalist estimates, the volume of the purchase of secondary shares stood at roughly $300 million, mostly from early investors who desired to actualize a portion of their shares while retaining others ahead of an IPO. Trax had raised a total of $360 million in previous funding rounds. Trax’s cloud platform is accelerating the digital transformation of consumer packaged goods (CPG) companies and grocery retailers by providing granular visibility of rapidly changing store conditions. Trax solutions enable users to make timely, data-driven decisions and implement immediate corrective actions.
Related articles:

Founded in 2010 by former CEO and current Executive Chairman Joel Bar-El together with CCO Dror Feldheim, Trax is active in more than 90 countries with its main offices located in Israel, the U.S., and Singapore. Trax has pioneered a host of technological advances for the industry. In the past year, the company has launched a suite of autonomous shelf monitoring solutions and an AI-driven, enterprise-level dynamic merchandising service to help brands and retailers keep products on shelves with the assistance of Trax Flexforce, an on-demand crowd marketplace. Justin Behar replaced Bar-El as CEO in 2020.

Trax expects to be profitable in 2022 after ending 2021 with revenue estimated at $130 million. The company fired 10% of its workforce following the outbreak of the Covid-19 pandemic in 2020 and later also sacked another 10% of its R&D employees in Israel. Trax currently employs around 1,000 people, 300 of them in Israel.