“My job as a CEO is evolving every quarter.”

Yochay Ettun, co-founder and CEO of Cnvrg.io, talks to Michael Matias about his journey from developer, founder, to being bought by Intel.

TAGS:
As a developer, it was hard for Yochay Ettun to do the early sales work for cnvrg.io, where he is co-founder and CEO. But he shares that he has been able to evolve personally as the company also grew. Early on, he did a lot of the coding, then he had to demo the product, listen to customers, and improve the product. Later, he learned to pitch the company to investors. Ettun explains that his job as CEO still changes every quarter, and he loves learning the new skills he needs. cnvrg offers a tool to automate much of the “grunt work” in data science and AI development and bring standardization. The company was acquired by Intel in 2020, and Ettun says part of the reason for the decision was to make a bigger impact on the world of AI than they could do on their own.

Yochay, where did your passion for AI come from?

It all goes back to me as a kid. Basically, I started developing stuff and building software when I was seven. After I finished in the army—I was in intelligence—I joined The Hebrew University. I was exposed to the world of machine learning. As a developer that likes to build stuff, that was extremely fascinating. I fell in love with AI. I started building stuff and doing some consulting work in AI and machine learning for other companies.

You’ve done some incredible things with other organizations. What was the trigger for actually starting a company?

I started doing software as a consultancy, specifically around machine learning. We built some cool stuff around speech recognition and natural language processing. I did those projects with Leah Kolben, who’s my co-founder and CTO at Cnvrg. We saw that we're facing some challenges that didn't really happen with general software development. We basically built Cnvrg as an internal product, something that we used ourselves to build our stuff. We started helping many other data science teams as well, so we decided to build a company.

How easy was it to have that conviction that you're onto something here that many people need, that this is something that can actually become big enough to get good VC funding from?

It wasn't easy. Both Leah and myself had this passion for building stuff that people use, and building tools for developers is the best thing to do, the best products to build. We basically talked to many other data scientists to see if this could be useful for them. We got a lot of no in the beginning, but we basically iterated the product a few times, and then it was like, it was a no brainer. We really liked the startup world. We felt that we got to a mini product market fit, so we just took the train.

When we started, it was just basically Leah and myself coding 16 hours a day for a few months until we had the first version. As a developer-CEO, after you build stuff, you need to get people to use it. I'm shy; I'm an introvert. Doing sales demos and pitches to other potential customers was very hard for me. Eventually, we managed to evolve, and we built a really good product that was very appealing to other data scientists. We listened to customers, and we did iterations on the product and improved it. We got some of the first paying customers. Then we raised our seed funding and series-A and eventually were acquired by Intel. 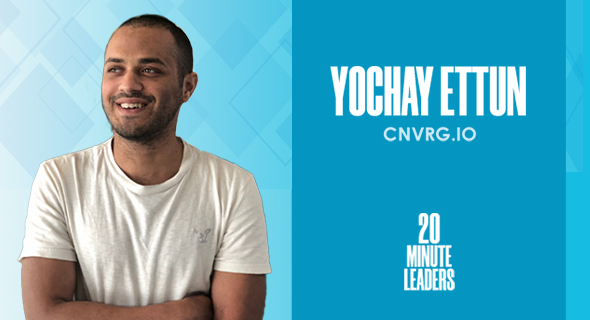 Does being an introvert and a developer conflict with you also being the CEO? Is that a challenge?

It was a challenge. One of the good things that I managed to do is to evolve with the startup journey. In the beginning, it was all about coding. Then learning how to sell a product, so that was hard. We always say that Cnvrg is a platform that was built by data scientists for data scientists. So it was easy for me to communicate those values of Cnvrg to other fellow data scientists. Then, we needed to do another evolution of selling to investors. It's a different pitch.

The thing that helps me to scale Cnvrg and to get to new accomplishments is to know that my job as a CEO is evolving every quarter. There are new skills I need to develop. It's fun and I love it.

Going back to November 2020 when you're in touch with Intel. What are the considerations on your end?

We had these discussions back in October (2020). What helped us to make this decision is that, one, it was a good offer for everyone and a good outcome.

Second, we wanted to build something that is really big in AI. We wanted to make an impact in the AI world. We felt that partnering with Intel was a perfect match for us. We're continuing to evolve and develop even as a part of Intel. As part of the acquisition, they kept the Cnvrg brand. They understand that they want to get to developers. The best way to do it is to have a brand by developers for developers.

Obviously, there is a great financial outcome, but even more than that, it's being in a place where you really are making the biggest impact that you can. Right?

Exactly. AI is evolving very, very fast. Intel is very strong with processors and hardware. They're looking to invest more in getting to AI. We can do more than we could do as a startup with Intel.

Share with me about the way that you see the scaling AI operations today and how Cnvrg is positioned within this world.

Machine learning today is the demand for building AI-based solutions. It's increasing dramatically. To build AI, you need to invest time in infrastructure, resource management, model management, tracking models, monitoring models, and scaling the hardware. This is what we do at Cnvrg. We basically automate a lot of the grunt work of data science development and help the data scientists to build more with less time.

The way that you're interacting with a company with their machine learning operations, how does it actually impact the company in practical terms?

Companies can now scale machine learning. When they're using Cnvrg, they can actually scale to hundreds of data scientists, building thousands of models, and basically getting much more from their data science teams. For example, we have a few customers that are basically training thousands of models every day, which is crazy. Without Cnvrg, it would probably be impossible or it would take them a few years of engineering.

We have some very unique use cases of complex infrastructure and hardware for AI. One of our customers, Seagate, the disk hard drive manufacturing company, uses Cnvrg on a hybrid cloud AI deployment, where they basically do defect detection in their manufacturing facilities. When a hard drive is going through the manufacturing process, there is a system that basically takes pictures of the disk. If there are some defects, then it automatically goes back or they put it aside. Those are the kind of models that we really like to see because they're actually solving some really big business problems.

Did companies realize already that this is a pain point of theirs?

When we started, we basically had to educate the market. Companies were like, "I'm not sure if we're facing those issues now. Let's talk in the future." We came really early to the market, and we managed to get all those early adopters. In the past year, it was easier for our sales team than it was for Leah and myself three, four years ago.

Why do you do what you do?

First of all, I really love the people in the company. Everyone. And I really enjoy building stuff. Creating stuff is something that I really like. Thankfully with Intel, we get to continue to innovate and grow and build. This is really what is exciting for me.