“Cannabis and women’s health have each been neglected for many, many years.”

Not everyone is willing to tackle one taboo subject in their work, but CEO and co-founder of Gynica, Yotam Hod, is combining two often stigmatized and neglected topics: cannabis and women’s health.

TAGS:
Not everyone is willing to tackle one taboo subject in their work, but Yotam Hod is combining two often stigmatized and neglected topics: cannabis and women’s health. As CEO and co-founder of Gynica, which is working on cannabis-based treatments for women, he is trying to bring help to hundreds of millions of females who experience things like painful menstruation or intercourse that are often not discussed. Hod is the son of a doctor, and he shares that he was always interested in the business side of medicine. After taking a course on cannabis entrepreneurship, he realized Israel has played a key role in the research field for 50 years, offering a lot of value to the growing industry. Hod explains that there is still a lot to learn about the substance. He says that more credible research and development are required for cannabis to become more accepted. Click Here For More 20MinuteLeaders How does one get to work on cannabis products for women's health?

I'm a black sheep in a doctor's family. But I always found the intersection of business and medicine very appealing. Since growing up with medical terminology around me and understanding some of the different aspects of the next generation of medical practice, I found myself very attracted by the business side of medicine.

My first job after my military service was working for a medical conference organizer. At the beginning of 2016, I found myself being pulled, mentally, by an emerging field called the medical cannabis space. I realized that Israel is the global leader in cannabis research.

THC actually was discovered in Israel in the early ’60s by Professor Raphael Mechoulam. He is still working, by the way, at The Hebrew University. He is considered to be the founding father of cannabis research. 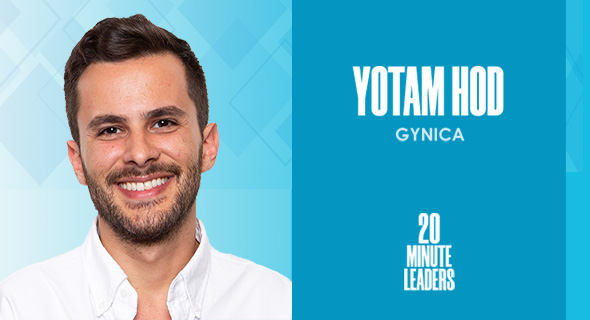 The story is that cannabis is actually an illegal substance, but Professor Mechoulam heard about this substance called "hashish" in the ’60s. As a chemist, he approached one of his friends at the police station and he asked if he could borrow some of the confiscated hash in order to study what's inside of it. Funny enough, he found himself coming back from the police station with five kilograms of hash. This is how THC was discovered.

This was actually a groundbreaking discovery because, as I mentioned, it's illegal. No one else globally had any access to such substances. This was actually a door opener that allowed for 50 years of research in academia here in Israel.

There are difficult and challenging regulatory hurdles for the medical cannabis space and the cannabis industry. But this early ’60s discovery actually opened the door for us in Israel to become a global leader and to gain experience of 50 years of real research.

It was followed by the discovery here, in 1992, of the endocannabinoids system, which was the second major discovery in Israel. It was discovered by Professor Lumir Hanus. This is just a tiny brief about why Israel is considered the global leader in cannabis research. Dozens of researchers have worked in such departments. But this fact brought Israeli researchers to really lead the way in everything to do with cannabis science.

I can understand the cannabis side of the venture. But I'm still a little puzzled by the gynecological side.

I started my journey in the cannabis space after taking a course at the Technion in 2016, entrepreneurship in cannabis. This course actually opened my eyes to the realization that, first of all, Israel has such a unique value proposition for the world for this emerging cannabis industry. But moreover, I realized that the biggest gap that there is globally is the fact that we simply don't know enough about cannabis.

In order to know enough, we need to research it. But because of the regulatory hurdles that quite limit the ability to research, it's very narrow. This realization was that research and development is key for acceptance of regulators, the medical community, the scientific community, and the patients, most of all, and the only way to bring comfort, credibility, safety is by bringing research, development, and proper scientific manners to such an emerging field.

I truly fell in love with this field. I found myself reading scientific papers about cannabis. This was the only credible source for knowledge about cannabis. One day, a certain paper caught my eye. It said that the female reproductive system is actually the organ with most endocannabinoids in our body after the brain.

As I mentioned earlier, I come from a doctor's family, and my father was a gynecologist. Things that are quite taboo in our world were not a taboo for us. On a daily basis, we're speaking about menstruation, sex, bleeding, and pregnancy. This is one of the things that allowed me to realize that the field of women's health is quite unaddressed. I'm sorry to say that they have been neglected by the medical community, the scientific community, and the industry. The most basic issues and ailments that women are suffering from still are unmet needs.

When we speak about painful menstruation, 800 million women worldwide every day are going through their periods. Some of them have to be in bed for a day or two every month. Or when we speak about dyspareunia, which is painful intercourse, around 40% of women suffer throughout their life. There are no dedicated treatments that Western industry has provided them. There is Viagra in the market, but there is no solution for the ailment and the pain of hundreds of millions of women who suffer daily from different issues.

In the past year or two, we have seen a great rise in interest in what's called FemTech, female technologies. This field is booming. We started five years ago. Suddenly, the industry realizes that aside from the comfort that those women deserve, there's a huge opportunity here as well.

How is the reception from those around you? Are people aligning to this understanding that there is a huge market that is underserved while it's also going to be making a really positive impact?

It's changing, but we still have a long way to go. I have to tackle two points here because I'm dealing in two notorious subjects. One is cannabis, and the other one is women's health. We see a lot of synergy because both subjects have been neglected by the public, industry, and regulators for many, many years.

They are both in their quite early stages, and they are both quite the taboos. The fact is that it's starting to change. We are beginning to see the subject out there on the table, discussed. There is no other way. Just as we see the women empowerment movement in different arenas, so when you speak about their health, this should be a top priority.

If you're looking at entrepreneurs considering what type of venture they want to be doing, what are some tips so that they can not be taken aback by the tabooness of the subject or just expose themselves to this subject? There's less material about this, less hype around this. And there's less people that are going to start companies in this field.

It's true. But we definitely see the change. In addition, it took me a very long time to be able to convince and present. As a young male who is not a doctor, how am I the one speaking about women's health and trying to provide solutions to a problem of hundreds of millions of women worldwide? Because we've taken off the table the taboos and are able to speak about it freely without a slight laugh or a wink, it allows us to do it the right way.

In the end, we need to neglect and avoid all the different stigmas and emotional aspects of speaking about sexual matters and menstruation. Once we are able to do that and speak in a direct professional manner, then this is the only way to really bring it to the front and to avoid the past stigmas and taboos surrounding such subjects.