The Associated Press first reported on the activity of the activists on Tuesday. 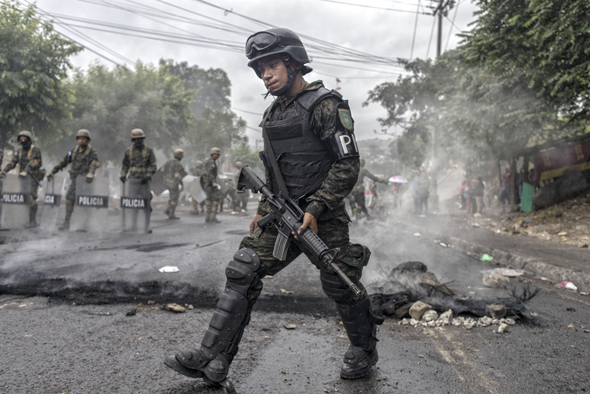 Protests in Honduras. Photo: Bloomberg
The group’s representative, Israeli lawyer Eitay Mack, sent a letter to Israel's Defense Ministry last week. In his letter, Mr. Mack wrote that the police in Honduras, known as one of the world’s most dangerous and corrupt countries and a serial abuser of human rights, uses Israel-made Tavor rifles. The letter also mentioned a 2015 arms sale agreement between Israel and the Honduran government, which has been divulged by the latter. The letter cited Honduran government officials, saying that the agreement included the sales of Israeli drones, surveillance systems, and maintenance services for fighter jets and helicopters. The deal is valued at $209 million. On Tuesday, Israel’s Ynet News reported that Israeli activists interrupted a speech by Prime Minister Benjamin Netanyahu at a Jerusalem bible contest. The activists called for the cancellation of Israeli arms deals with what they defined as “brutal dictatorships.” Group members hackled Mr. Netanyahu, calling him to stop selling arms to “murderers.”

Earlier this month, a report by The Citizen Lab, a laboratory based at the Munk School of Global Affairs at the University of Toronto, revealed that the Ethiopian government targeted computers of advocates of the Oromo ethnic minority group with spyware provided by Israel-based defense contractor Elbit Systems Ltd.

The Oromo group represents around 35% of Ethiopia's population, according to a 2007 census. In November 2015, a plan to expand the capital Addis Ababa into the Oromia region sparked protests, causing the government to impose a state of emergency and leading to clashes resulting in hundreds of casualties.

Cyberbit’s spyware is not the first Israel-made spyware identified by Citizen Lab. Last year, Citizen Lab researchers uncovered a spyware made by Israel-based surveillance company, the NSO Group, which was used by a customer in the United Arab Emirates to target human rights activist Ahmed Mansoor. The same spyware was later found to be used to target activists, journalists and political opposition in Mexico.

In November, Israeli Lawmaker Tamar Zandberg criticized Israel’s policies on the export of weapons and military technologies in a post to her Facebook page.

Ms. Zandberg’s criticism was triggered by an Israel Police criminal investigation into UAV manufacturer Aeronautics Defense Systems Ltd. The company has allegedly carried out a live demonstration of one of its suicide drones on an Armenian army post, at the request of its client, the Azerbaijani army. In August, the Israeli Defense Ministry began investigating the allegations, which Aeronautics denied. An Israeli court has issued a sweeping gag order on all details about the investigation, which has been underway since September. In her post, Ms. Zandberg wrote that she had appealed to the Israeli Minister of Defense Avigdor Lieberman, requesting that he cancels Aeronautics’ license to export drones to Azerbaijan, where, she said, they could be used to fuel the ongoing conflict between Azerbaijan and neighboring Armenia, violating the fragile ceasefire agreement between the two countries.
Related stories:
“According to reports, Israel in recent years has become a premier weapons importer to Azerbaijan, ignoring a weapons embargo on the country,” Ms. Zandberg wrote. Citing reports, she added Israel “has been selling information, weapons, surveillance system and military equipment to Azerbaijan.” Ms. Zandberg also cited a 2008 incident in which Israeli military exporters were involved in a Georgian attempt to take over the separatist South Ossetia region, an operation that evolved into a regional war with Russia.
Cancel Send
To all comments