Risk-Averse and Dependent on Arab Oil, Japan Tiptoes Through the Middle East

The country continues to strengthen its ties with Israel, while simultaneously providing aid to the Palestinians

Japanese Foreign Minister Tarō Kōno’s visit to Israel on Monday comes at an awkward time – last week, Japan joined 128 other countries in supporting a United Nations General Assembly resolution slamming the U.S. Administration’s declaration of Jerusalem as Israel’s capital. This did not go ignored by Israeli president Reuven Rivlin, who finished an otherwise successful meeting with Mr. Kōno on Monday by saying “just as Tokyo is Japan’s capital, Jerusalem is Israel’s.” Perhaps, Mr. Rivlin should have been advised that Japan’s capital city was not always Tokyo and that the idea of an ‘eternal capital’ may not translate well to Japanese.

Japan and Israel’s relationship is growing at a phenomenal rate. Just this month, Tokyo hosted three Israel-Japan conferences focusing on innovation, cyber technology, and wine, respectively, and Japanese executives are constantly touring the country in search of new Israeli partners. However, the relationship has been almost exclusively defined by economic cooperation and business ties, neglecting the potentially more flammable diplomatic side.

Japan’s ministry of foreign affairs is no stranger to the Middle East or the Arab-Israeli conflict. Japan’s attitude in this regard is rooted in the 1973 OPEC oil crisis, which deeply affected the country, increasing its dependency on Arab oil. Additionally, Japan is one of the biggest donors of foreign aid in the world, usually coming in just behind the United States and the European Union. It is one of the five biggest donors to Palestinian causes, giving over $1.77 billion to the Palestinians since 1993, and has been actively involved in building an industrial park in Jericho, a fact emphasized by Mr. Kōno as he stated his hope that this project will “prevent the younger generation from going into terrorism and give them hope.” 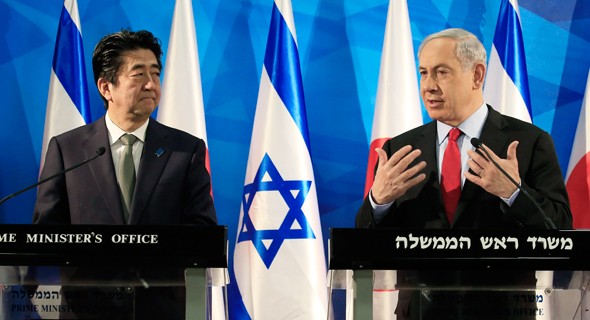 Japan was badly burnt by the 2014 kidnapping of two Japanese nationals by ISIS, which came after Prime Minister Shinzō Abe pledged to financially support combat against the militant group. This has led to a characteristically apprehensive attitude towards the Middle East and the Arab-Israeli conflict that, though benign, does Israel no favors.

Japan is effectively leading a double life – constantly strengthening connections with both sides of the Arab-Israeli conflict. Historically risk-averse, Japan, will likely continue to cast UN votes following mainstream public opinion, and Tokyo’s foreign office will continue to nurture its ties with oil-rich Arab countries. Japan is also unlikely to end financial support of the Palestinians as it sees it as its club of ‘involved nations’ membership card.

Related stories:
It is, however, important to emphasize that the diplomatic steps described above, do not detract, in the slightest, from the growing economic relationship between Japan and Israel. Thirsty for innovation and with a positive attitude towards Israel, Japan will likely seek to strengthen the two countries’ economic cooperation. During his visit, Mr. Kōno chose to focus his remarks on the jewel of Israel-Japan relations – innovation. “I see Israel as a nation full of talent,” he said in a joint press conference with President Rivlin, emphasizing not only technology but also arts and culture. Such remarks are music to Israeli official’s ears, and his hope for a direct-air link between Israel and Japan also bodes well for traveling businessmen. The economic relations between to two will continue to grow, but we can expect no change from Tokyo in UN votes or foreign policy.

Gilad Kabilo is a consultant to Japanese businesses seeking collaborations in Israel. He is the Asia Director for pro-Israeli advocacy organization StandWithUs and an Israel-Asia Center Leaders Fellow.