After announcing the cancellation of its annual bonuses for 2017 due to debt, the Israel-based drugmaker rolled out a performance-based bonus scheme for 2018 in February

TAGS:
Debt-laden generic drugmaker Teva Pharmaceutical Industries Ltd. is being sued by some of its Israeli employees, following its recent announcements regarding changes to its annual bonus scheme and CEO Kåre Schultz’s decision to cancel employee bonuses for 2017.

Israel-headquartered Teva is currently struggling with around $32 billion in debt, $1.5 billion of which needs to be repaid by July. The company took out extensive loans to finance its 2016 acquisition of Allergan’s generic Actavis, but worsening conditions in the U.S. generic market and diminishing profit margins led Mr. Schultz, who stepped in as CEO in November, to announce an aggressive reorganization plan in December. 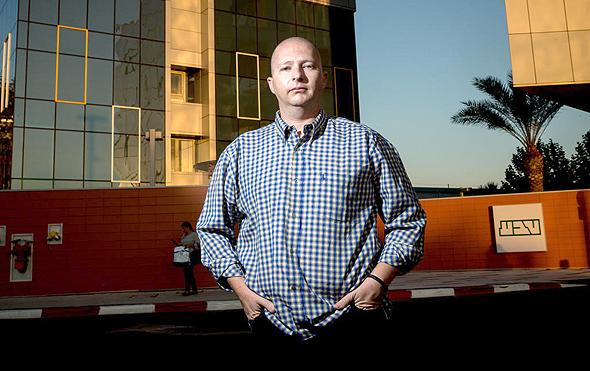 Teva Kfar Saba union chief Eliran Kozlik. Photo: Tal Sachar
Mr. Schultz’s plan to stabilize the company’s financial situation includes wide-spread asset divestment and closure, the termination of 14,000 employees, including in Israel, and the streamlining of Teva’s drug portfolio and pipeline. The company also stated that it will cancel all employee bonuses for 2017. In February, Teva rolled out a new bonus scheme for 2018, which will see employees compensated based on their individual performance, and on the company’s financial performance. On Wednesday, the employee organization of Teva’s Kfar Saba facilities filed a lawsuit against the company in the Tel Aviv regional labor court. In the suit, the employees claimed that the cancellation of 2017’s bonuses goes against Teva’s collective agreement with its employees and negates a right that is anchored in every employee contract. The plaintiffs demand that Teva hand out the bonuses for 2017, and reinstate the company’s former bonus scheme for 2018. Much of the employees’ ire is based on the fact that Teva’s senior management did receive bonuses for 2017. The Actavis deal’s engineer Erez Vigodman stepped down as CEO in February 2017 amidst growing criticism, but continued receiving a salary worth NIS five million ($1.45 million) for the next six months—around NIS 10,000 ($2,900) a day, and also a $2 million bonus. Interim CEO Yitzhak Peterburg, which replaced him until the appointment of Mr. Schultz, received $9.2 million for that eight-month period. Mr. Schultz himself received $20 million in cash as part of his contract and is also entitled to a performance-based target annual bonus of 140% of his annual base salary. The plaintiffs claim that his decision to cancel the bonuses derives directly from the fact that his own bonus depends on how much money he will save for Teva. The plaintiffs also state that Teva has refused to discuss the matter with the employees, claiming that bonuses are not subject to obligatory negotiations. The company’s one-sided change to the bonus scheme bases the compensation, among other things, on Teva’s stock market performance, Kfar Saba union chief Eliran Kozlik told Calcalist in an interview, adding that it is a factor the employees have no control over.
Related stories:

The fact that a wage component is called a bonus does not mean the CEO can change it at will, Mr. Kozlik said. “It’s a part of the employment contract that the employer cannot legally cut one-sidedly.”

Teva’s financial situation necessitated drastic steps, including factory closure and worldwide employee layoffs, a Teva spokeswoman told Calcalist. Taking into consideration Teva’s financial situation and the fact that the company failed to reach its targets for 2017, the company decided bonus compensation for the year was unwarranted. This decision encompasses all of Teva’s global employees. Therefore, Teva finds it regretful that the company’s Kfar Saba union chose to file a claim in court instead of facing reality.
Cancel Send
To all comments