TAGS:
Intel unveiled its latest Core i9 laptop processor on Tuesday in Beijing. Intel’s Israeli research and development center in Haifa, a port city in the country’s north, played a major part in the development of the new processor, the company said in a statement.

The high-performance Core i9 processor is part of Intel’s eighth generation product lineup, which comes with an integrated software that addresses the Spectre and Meltdown security flaws revealed in January. 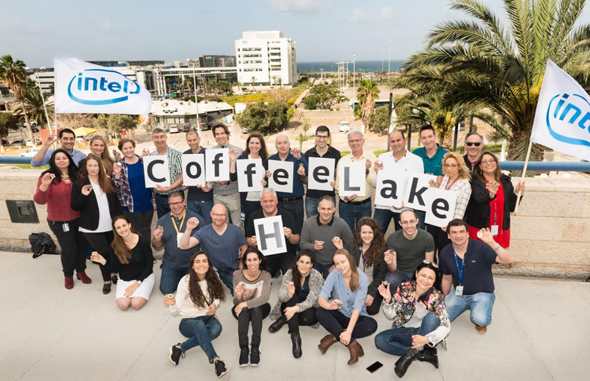 Intel's Israel research and development team. Photo: PR
The new generation of processors is based on Intel’s 14 nanometer Coffee Lake architectures and has integrated Wi-Fi technologies enabling connections twice as fast as the current standard, according to a statement. The Core i9 processor is aimed for gaming, graphic design, video editing and 3-D graphics. According to the statement, the processors are capable of delivering 41% more frames per second in gameplay and edit 4K video up to 59% faster than previous generation processors. The extremely high performance provided by the Core i9 processor comes as an answer to the ever growing needs of gamers, Karin Eibschitz Segal, the director of Intel’s Israeli development center said in a statement.

Intel also launched a new extension which combines Intel’s eighth generation processors with its system accelerator Optane memory, capable of accelerating performance to a speed of up to 4.8GHz, while adjusting cooling systems to performance needs.

Related stories:
In February, CEO of Intel's operations in Israel Yaniv Garty announced that Intel is planning to expand chip manufacturing in Israel, with a $5 billion investment in its existing plant in Kiryat Gat, a town in the south of Israel. On Monday, it was reported that Apple will cease using Intel processors in its Mac computers starting 2020.
Cancel Send
To all comments