Last week’s events—President Trump's announcement that the U.S. will withdraw from the Iran Deal, the Iranian rockets launched at the Golan Heights, and the extensive strikes Israel staged throughout Syria against Iranian objectives in response—have unveiled a small part of an unprecedented arms race in the Middle East.

In his speech, President Trump referred to the fact that the Iranian nuclear project, along with the effort to develop long-range missile systems and intensive involvement in terrorism, has already led the other countries of the region to massively arm themselves.

The factor that pushed this race to unprecedented proportions in Middle East history was, first and foremost, the Iranian nuclear project. As early as the outset of the present decade, Iran's neighbors estimated that the Shi'ite country was determined to obtain nuclear weapons, but after the sanctions that had been imposed on Iran were lifted under the 2015 agreement, nearly all restraints were removed. 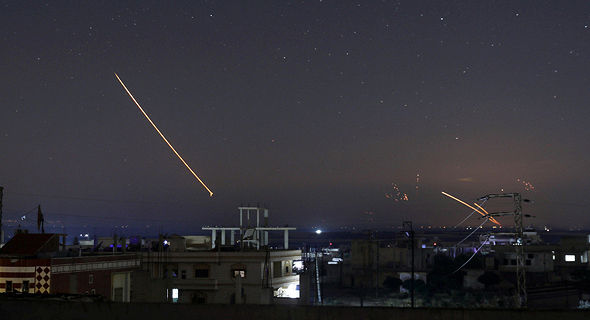 Syrian anti-aircraft missiles. Photo: Reuters
Most of the restrictions on the sale of arms to Iran included in the 2015 deal would be lifted as of 2020, but the transfer of billions of dollars into Iran's empty purse has already started the procurement drive, in practical terms. The scope of armament in the region was presented in a May paper by researchers from the Institute for Policy and Strategy at the Interdisciplinary Center Herzliya (IDC), an Israeli academic institute. The paper by researchers Shaul Shay, Oded Brosh, and Yair Freymovich describes how Iran, Saudi Arabia, the UAE, and Egypt have become a major target market for defense contractors and weapon makers. Russia sold state-of-the-art S-300 air-defense batteries to Iran, but the deal was put on hold due to the sanctions. Russia still intends to supply Iran with Sukhoi-35 fighters and various sea, air and land systems, including cruise missiles and ballistic missiles. The scope of the procurement deals between Russia and Iran will amount to $10 billion. Russia is also stocking up the weapon silos of Syria with S-300 and SA-17 air-defense systems, Yakhont shore-to-sea missiles and Metis and Kornet anti-tank missiles. A massive armament process is also taking place in Sunni Muslim countries, that regard Shi’ite Iran as a threat. The recent reports regarding the severe economic situation in Egypt notwithstanding, apparently el-Sisi's regime invests billions in a military build-up. Rebuked by the U.S. over human rights violations, Egypt has set its aims on creating arms development operations of its own, and to diversify its procurement sources. Accordingly, Egypt is to take delivery of not less than 180 latest-generation U.S.-made F-16 fighters, along with 50 Russian-made MiG-29 fighters to be delivered by 2020, 24 French-made Rafale fighters and 46 Russian-made Ka-50 Kamov attack helicopters. After getting a cold shoulder from the U.S. when it comes to unmanned aerial vehicles, Egypt turned to China. The Egyptians are also investing in ground forces and anti-aircraft systems. The country’s main focus is on naval arena: Egypt bought two aircraft carriers and corvettes from France, and four submarines from Germany. Without a doubt, the country making the most substantial arming effort in the region is Saudi Arabia. This year, Saudi Arabia's defense budget was no less than $56 billion, nearly three times the size of Israel’s annual defense budget. The kingdom is the world's second-largest importer of arms, after India. The Saudi procurement list seems endless, and the country is set on establishing aircraft and weapon manufacturing operations on its soil, in cooperation with the likes of Lockheed Martin, British BAE, or the Ukrainian aircraft manufacturer Antonov. Nearly none of this procurement pertains to an expected deal with the U.S., that could amount to the procurement of systems worth hundreds of billions of dollars over a decade. The deal has been under discussion since 2017.

In the past two years, the United Arab Emirates (UAE) was ranked as world's third-largest importer of arms.

The UAE has been acquiring cutting-edge weapon systems from the U.S., Russia, the U.K., China, South Africa and Finland, while at the same time developing a local arms industry. Qatar has been arming itself to the tune of tens of billions of dollars, putting down dollars at an even higher pace since it had a diplomatic showdown with Egypt last year. France sold 12 Rafale fighters to Qatar, Italy added seven frigates, and Germany threw in some tanks. The Qataris do not necessarily have the forces to operate all these weapons, but they keep buying nevertheless.

In contrast, a former head of a division in the Mossad claimed regional armament opens new opportunities for Israel. Armament by Saudi Arabia and other countries "Is more of an opportunity than a threat for Israel," said Haim Tomer, former head of the Mossad directorate responsible with relations with potential Middle Eastern allies to Israel.
Related stories:
Saudi Arabia and the UAE see Iran as a “very concrete” threat and can potentially form a military alliance with Israel against Iran, he said. This article was originally published by IsraelDefense.