In a statement sent to Calcalist Sunday, the company said the move is part of a decision to focus on mature markets outside of China, such as the U.S. and Europe

TAGS:
Beijing-based bike-sharing service Ofo changes course, discontinuing activity in Israel, the company confirmed Sunday. In a statement sent to Calcalist Sunday, the company said the move is part of a decision to focus on mature markets outside of China, such as the U.S. and Europe.

Ofo launched its pilot in Israel in April in Ramat Gan, east of Tel Aviv, and at the Weizmann Institute of Science, a research university in central Israel. In June, Yedioth Ahronoth reported Ofo was ending its service at the Weizmann Institute because many users failed to return the bikes to campus, causing the company high retrieval costs. Later that month, Ramat Gan released data showing Ofo’s bikes are being used about 1,300 times a day in the town. 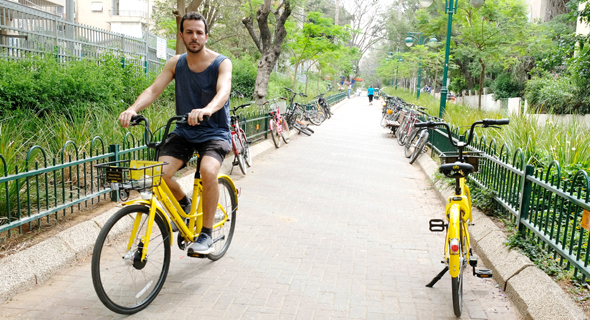 Ofo bikes in Israel. Photo: Shaul Golan
Ofo’s bikes do not require specific docking stations and can be parked anywhere and later traced using a mobile app. In July, Chinese e-commerce company Alibaba led a $700 million investment round in Ofo.
Related stories:
Ofo will withdraw the 500 bikes it currently has in Israel by the end of the month, the company said in a statement. The Israeli bike-sharing market has several major players including Beijing Mobike Technology Co. Ltd. and Tel-O-Fun, run by the city of Tel Aviv.
Cancel Send
To all comments
Buzz