TAGS:
Mylan N.V. has cut the wholesale acquisition cost (WAC) of its generic version of Copaxone from $5,000 to $1,900, according to a Monday report by Bernstein Analyst Ronny Gal. As Teva Pharmaceutical Industries Ltd. currently sells the brand name at $5,800 a month, the move makes no commercial sense, wrote Gal.

First introduced into the market in 1996, Copaxone is used to treat relapses in patients with Multiple Sclerosis, a chronic and progressive disease of the central nervous system. The drug has netted Teva more than $40 billion over the years, accounting for a fifth of the company's revenues in 2016, the year Teva's patents expired. 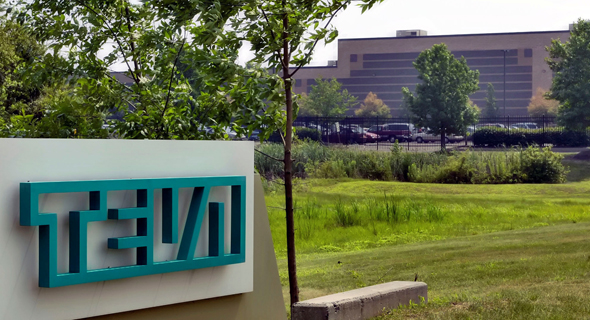 Teva's U.S. headquarters. Photo: AP
The drug has seen a dramatic rise in price since its launch. When the 20 mg/ml version of Copaxone was released in 1996, it had an average annual price tag of $8,292. By now that version’s cost has risen by over 1000%, commanding an average annual price tag of over $90,000 in the U.S., according to a 2015 study by the American Academy of Neurology. The 40 mg/ml version, which requires only three injections a week, was introduced in 2015 and by now dominates over the 20 mg/ml version. Despite some generic competition in Europe before, where generic versions of the 20 mg/ml were approved, Teva's biggest Copaxone-related blow came in October 2017, when the U.S. Food and Drug Administration approved both of Mylan's generic versions of the drug. The timing couldn't have been much worse for Teva as it was in a downward spiral at the time, with a plummeting stock price and increasing doubts about its ability to carry its debt of around $35 billion, accrued as a result of its 2016 acquisition of Allergan's generic unit Actavis. The company was entering a seventh uncertain month with interim leadership company. Within a few days, Teva announced Kåre Schultz as its new CEO. By December, Mylan achieved a 10% market share in the U.S., according to Credit Suisse analyst Vamil Divan. However, Mylan's strategy of under-pricing Copaxone only modestly, though classic for generic drug companies, was not overly successful; the company currently has a market share of 15%-20%, according to Gal. A Goldman Sachs report published June has said much the same, with analysts Jami Rubin, Candace Richardson, Divya Harikesh and Yash Patel stating that Copaxone was proving to be more durable than estimated in the face of generic competition.
Related stories:

The decision could be a result of the downward pricing pressure exerted by the current U.S. administration, Gal wrote. The promise to lower the ever increasing drug prices in the U.S. was a significant part of President Donald Trump's 2016 election campaign, as public and congressional ire has been rising for the past few years over the steady price hikes most drug companies performed at least twice a year. Speculation suggests that Mylan might have traded the discount on generic Copaxone in return for benefits in another of its segments, Gal wrote. On Tuesday, Pfizer announced its decision to defer recently-announced price hikes for up to six months following a criticizing tweet from Trump.

A second potential explanation is that Mylan's move is intended to drive down prices in the Copaxone market in order to impact Teva's profits, according to Gal. Both Teva and Mylan are currently trending down.
Cancel Send
To all comments