Is Israel Dropping the Ball on Africa’s Economy?

The story of the Israeli technology industry is an inspiration for hope and rebirth for many of the African nations, and Israel must therefore create a serious policy that will encourage relations with the countries of Africa

TAGS:
In recent years, Israel has tightened its economic relations with awakening markets and developing nations. While the Israeli business sector had realized the potential some time ago, the relevant government ministries have only recently awakened to the fact that the greater share of global economic output has shifted from the developed markets to developing countries. Today, 55% of the gross world product comes from developing markets; over the next decade, 70% of global growth will come from these countries, a trend that will increase the impact these countries have on the world's economy. Israel-Africa relations can be seen as an indication of Israel’s relations with developing countries.

Israeli relations with African countries have fluctuated greatly since they were first established. On one side were close strategic pacts such as the “Alliance of the Periphery” signed in the 1950s, intended to establish an coalition of interests between Israel, Ethiopia, Iran, and Turkey (non-Arab countries that neighbor countries then in conflict with Israel: Egypt, Jordan, Syria and Iraq) and imprison those countries inside a circle of Israel sympathizers. On the other side were periods like the complete cutoff of relations following Arab pressure in the wake of the Yom Kippur War.

Presence Under the Radar

Despite the break in diplomatic relations, Israel kept a presence in Africa ‘under the radar,’ mainly for defense purposes. More than one-third of Israel’s total defense exports at the end of the 1970s was to African countries. From this period, the close connections Israel kept with the Apartheid regime in South Africa, which included the sale of arms used for the oppression of the black population under the white supremacist regime, are especially jarring. For over a decade, even after the United Nations arms embargo became mandatory in 1977 and Western Nations broke off relations and imposed sanctions on South Africa, and up to 1987, Israel remained the only country that kept its relations with Apartheid regime. 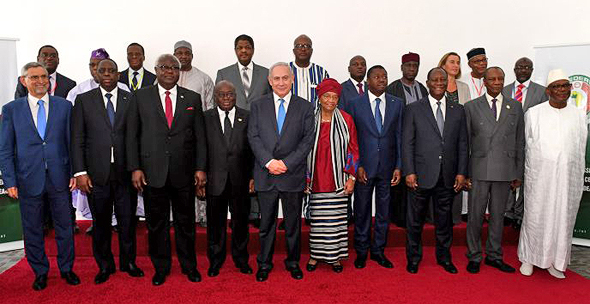 Since the start of the 21st century, Sub-Saharan Africa has been seeing unprecedented economic prosperity and growth: growth rates that are among the highest in the world; a sharp rise in the scope of commerce with the rest of the world; a huge flow of large-scale, direct foreign investments that are coming to the continent; and a consumer middle-class that is expanding and growing sharply, and whose purchasing power has expanded significantly. In addition, there is industrialization on a wide and intensive scale and massive investments in infrastructure that have doubled over the past decade, which together with low production costs have marked Africa as the next global production center.

According to data from the Israel Export Institute, in 2017, after a number of consecutive years of decline, the total of Israeli exports to African countries has grown by around 5% from 2016 and totaled some $860 million, around 1.6% of the total exports from Israel. This improvement can be connected to the significant revival in the scope of global commerce in that year, as well as an important government decision that was taken in the summer of 2016 to tighten economic relations with African nations. This was after Prime Minister Binyamin Netanyahu identified Africa as the focus of a growing market with many opportunities for increased economic cooperation. Since then, Netanyahu has visited a number of African countries on various occasions.

However, in reality, African countries constitute a small segment of Israeli foreign policy, and despite the positive economic changes in Africa and the attractive business opportunities that abound on the continent, it is still far from being one of the primary export targets for Israel.

For example, in 2017, as in previous years, Israeli exports to dozens of African countries together were equivalent to the exports to a single European country–Belgium. Israel’s exports to Belgium in that year totaled $860 million, equal to the total scope of exports to over half of the Sub-Saharan countries together. This data suggests that Israel is missing the boat when it comes to the African economy, despite correctly identifying the opportunities.

This picture of reality gives rise to reflections about the “villa in the jungle” school of thought, on a broader perspective than just the geographical area around Israel. Does a Eurocentric concept–one that sees Israel as a pre-historic outpost and which strives to be like Europe and the West, while differentiating itself from the demographic and geographic region that surrounds it–disrupts and even prevents the relations with African countries? Most African nations, certainly most of the Sub-Saharan ones, are sympathetic to Israel and in principle at least have no rivalry or conflict with it.

On the contrary, the story of a persecuted people who have rehabilitated themselves from genocide and established a small desert country, surrounded by enemies, that has succeeded in prospering against the odds and the lack of economic resources, resounds with the African nations’ narrative of breaking free from violent, murderous, dispossessing, exploiting and repressive colonialism. The story of Israel and its tech industry constitutes an inspiration for hope and rebirth for many African countries. What is Israel doing with the extensive credit that has been generously given to it by African nations?

The first signs that suggest a change in attitude can be seen in the series of government decisions over the past years for strengthening economic relations with China, India, African countries and South-American countries. The government’s decision passed in July 2018 to promote Israeli activities as part of international development in awakening markets illustrates that the decision makers do in fact realize that the economies of developing nations will soon be a significant part of the global economy.

It will be in Israel’s interest to begin constructing a serious policy that will encourage connections with African nations and other developing countries, and step outside the scope of its Eurocentric tunnel vision. Allies and friends are nearby, just a few steps over the villa’s fence.

Amir Sabhat (CPA) is a senior research fellow at the Samuel Neaman Institute for National Policy Research at the Technion and a senior consultant for HealthCare. Israel