By moving some of its production to the states, Israeli IAI is preparing for a day, a decade from now, when Israel must spend all its U.S. military aid money on U.S.-made weapons

TAGS:
Israeli defense contractor Israel Aerospace Industries Ltd. (IAI) announced Wednesday that the production of its Arrow 3 anti-ballistic missile canisters had been moved to the U.S. The canisters, which contain electronic components capable of transmitting commands to the Arrow 3 missiles, will now be manufactured by Columbus, Mississippi-based Stark Aerospace, Inc., an IAI subsidiary.

The Arrow 3 missile is designed to defend against long range, high altitude, precise ballistic missiles threats. Jointly developed by the U.S. Missile Defense Agency and the Israeli Ministry of Defense, Arrow 3 is a central component of Israel’s multi-layered defense system that also includes David's Sling, Iron Dome, and Arrow 2. The Israeli Air Force began operational use of Arrow 3 in January 2017. 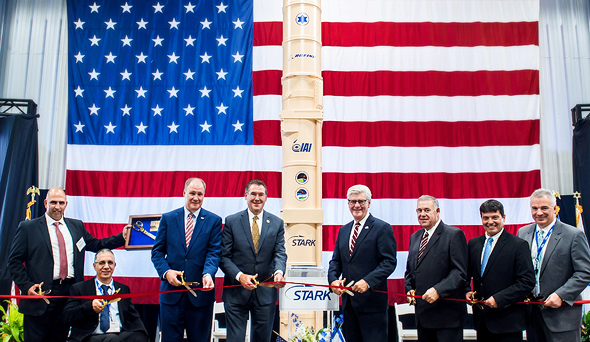 Launch of U.S. manufacturing line of Arrow 3 canisters. Photo: Bella Vie Photography
By moving some of the production to the U.S., IAI is preparing for a day when Israel must spend the American military aid money it receives exclusively on systems manufactured in the U.S.
Related stories:
According to an April report by the Congressional Research Service, a public policy research arm of the U.S. Congress, The U.S. pledged to provide $38 billion in military aid to Israel in 2019-2028. This Memorandum of Understanding, signed in 2016, replaced a previous 10-year agreement of $30 billion that covers 2018. The Memorandum of Understanding also states that beginning in 2019, Israel must gradually shift all its aid money spending to U.S.-made weapons. In an interview with Calcalist, Boaz Levi, executive vice president of IAI’s missiles and space group, said that this is the first time that an IAI missile component is manufactured end-to-end in the U.S. Levi added that IAI intends to set up production lines of additional Arrow 3 components in the U.S. in future.
Cancel Send
To all comments