Like a fingerprint, every tattoo is ostensibly unique and can be used by law enforcement agencies and other entities for identification and profiling

Just last week, San Francisco banned some uses of facial recognition technologies (FRT) in a nearly unanimous decision. Congress is supposedly also thinking of producing relevant regulation to limit the use of FRT, and the U.K.’s controversial uses of FRT are currently being challenged in court.

San Francisco’s particular efforts are ostensibly part of larger data privacy reform considerations. To a degree, the ban reflects concerns over the perceived disproportionate use of such technologies on minority, poor, and disenfranchised populations. 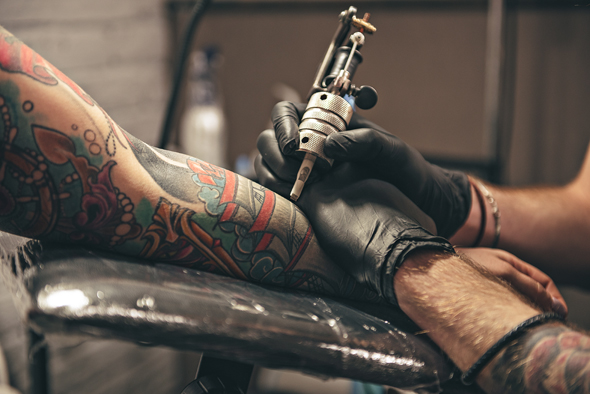 While closed circuit cameras (CCTV) have been monitoring us incessantly in public and private spaces for decades, CCTV’s ability to truly intrude on our privacy only became real once artificial intelligence (AI) made persistent and real-time facial recognition technologies possible.

In the past, CCTVs were not regarded as especially problematic. Like the quantum state of a subatomic particle that imperiled Schrodinger’s famous cat, our privacy was neither preserved nor invaded unless someone, for example, the police, actually put in the time and effort to observe the CCTV tapes. The chances of someone actually watching those tapes fell somewhere between slim to none.

In the age of AI, however, the observations that may or may not have eventually killed Schrodinger’s cat, are now killing our privacy. At the least, this is how it feels to the average Joe, and that feeling has legal repercussions, as shown by the recent San Francisco decision.

In general, facial recognition is seen as a particularly nefarious imposition on our privacy. Unlike many other means of identification, our faces are perceived to be especially problematic, as they are constantly on display—many jurisdictions even have laws that prohibit wearing masks in public—and are effectively immutable. You can change your social security number, your passport number, or your driver’s license number, but it is very hard to change your face to a degree that you are no longer recognizable. Michael Jackson and Joan Rivers are some of the most conspicuous evidence of this.

In light of San Francisco's ban and potential future bans in other municipalities, some security establishments may look to other useful means of identification that can exploit the expansive and already deployed CCTV networks. One possibility that may prove as useful may be tattoo identification. Tattoo recognition generally falls into the category of biometric recognition technologies, an evolving area which includes various types of identification via permanent physical traits including the face, fingerprints, and the iris. Tattoos are considered soft biometric traits, like scars and other marks. Tattoo identification technologies are likely to become more prominent. Statistics differ, but nationwide, at least 15% of adults in the U.S. have at least one tattoo, and that number is rising, particularly among the younger generation. What was once associated with criminality and the sullied underbelly of society, is increasingly becoming mainstream, although biases regarding tattoos still remain.

Like a fingerprint, every tattoo is ostensibly unique in terms of the image itself, as well as its size, placement, ink and other characteristics. These factors can be appropriated and analyzed by law enforcement and other entities to apply various technologies, including AI and infrared cameras that can see under clothing, to identify, map, and corelate these unique markings to identify a growing portion of the population. It is thought, for example, that the state of the art already includes AI technologies that can extract tattoos off of CCTVs and other videos to provide insight into religious, political, and gang affiliation, as well as geographic localization.

Many of the current tattoo recognition technologies were developed in conjunction with the FBI and the National Institute of Standards and Technology's (NIST) Tattoo Recognition Technology Challenge and Evaluation Programs. (Tatt-C and Tatt-E respectively). These technologies employ databases full of tattoos of people captured by law enforcement, and allow law enforcement agencies to match tattoos, based even only on partial images, to their original sources; reverse engineer the process of creating the image to divine the original source; as well as find related, associated, and like-minded individuals based on tattoo similarities. These technologies are also capable of extracting data from different types of media, perhaps facilitating even tattoo-based dragnets.

As a useful tool in biometric identification, the introduction of tattoo databases that are scoured and scraped by AIs raises many of the same ethical and legal considerations associated with FRT. To this end, digital rights group the Electronic Frontier Foundation (EFF) filed a lawsuit in November 2017 to demand more information about the secretive NIST projects. But tattoos raise additional considerations that are less relevant to mainstream biometrics technologies. For example, tattoos are arguably a form of speech, and that speech is protected in most jurisdictions, albeit sometimes with limited protections. In general, while the courts remain mixed on the extent of first amendment protection for tattoos, both the 9th Circuit and 11th Circuit appellate courts have upheld a general protection of tattoos under the First Amendment. But those rights are still limited. In 2000, a superior court in Madera County in California, found a ban of tattoos on a minor parolee to be constitutional, since the ban was on “the manner in which the message is conveyed, not the message itself. As such, it constitutes a reasonable manner restriction on (the minor's) free speech rights.”

As tattoos are recognized as at least some form of protected speech, the courts should be worried about programs like the Gang Graffiti Automatic Recognition and Interpretation (GARI). A joint effort by Purdue University and Indiana State Police, GARI allows authorities to track gang growth and activity throughout the country. These types of programs threaten to chill tattoo associated speech by using tattoos to make assumptions about individuals and their purported criminality. These systems also undermine constitutional rights, such as the freedom of association of like-tattooed individuals, another first amendment right.

In defense of the government’s efforts, these underlying assumptions actually remain pervasive even in our tattoo friendly society. Surveys have shown that nearly half of all Americans will still judge a person based on whether or not they have a tattoo. This includes associations with substance abuse, violence, and promiscuity. NIST itself incorporates these beliefs into their underlying reasoning in developing Tatt-C : “Tattoos provide valuable information on an individual’s affiliations or beliefs and can support identity verification of an individual.” Unlike other areas of biometric recognition, tattoos also raise concerns related to intellectual property rights. While personal tattoos —that are often copies of images lifted off of other people’s creative designs— are likely fair use of an original copyrighted image, when they are collected into shared databases, or prominently displayed online, the fair use defense may fall away. As such, the development of a government tattoo database may infringe the copyrights of the original tattoo artists, although many public tattoo databases already exist publicly, seemingly without repercussion.
Related stories:
Distressingly, tattoo recognition also raises concerns related to social justice. Tattoo removal is expensive. Those who can afford it can spend the time and the money to have their poor drunken choices or past affiliations erased from their body, while the less-well-off may have to live forever with the consequences of their bad decisions. Even with all of this, we should not discount the good that tattoo recognition can provide; it has, for example, been used in a number of occasions to identify victims of mass tragedies. Perhaps, in light of this, San Francisco should make sure to not to ban tattoo recognition technology like it did to FRT, given the impending "big one."’ Dov Greenbaum, JD PhD, is the director of the Zvi Meitar Institute for Legal Implications of Emerging Technologies and Professor at the Harry Radzyner Law School, both at the Interdisciplinary Center (IDC) Herzliya.
Cancel Send
To all comments