TAGS:
In an effort to expand autonomous vehicle testing in the country, Israel is inviting property owners to submit offers for the creation of new testing sites, state-owned company Ayalon Highways Co., which is overseeing the tender, announced recently. The intention is to establish different sites throughout the country, not only in the areas surrounding Tel Aviv, the company said.

Interested parties who own or lease locations suitable for such testing sites are invited to send in their bids no later than June 23. The testing sites will be closed to the public, ensuring the cars will be able to travel a distance of at least 1.5 kilometers at 60 kilometers per hour, without encountering human obstacles. The winners will also be required to use photographic means to document the movement of the autonomous vehicles, including camera-equipped drones. 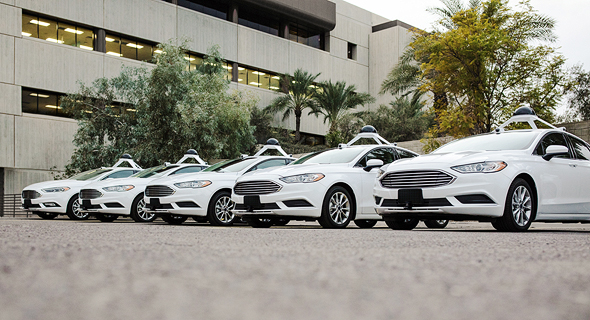 Autonomous vehicles. Photo: Intel
In order for autonomous cars to be able to practice real-life conditions, the complex will need to include several routes, a T-junction, at least two traffic circles 100 meters apart, and three pedestrian crossings. In addition, a tunnel will be need to be built in the compound, with a special section that will be installed with sprinklers to simulate rain conditions. In October 2017, the Israeli Ministry of Transportation inaugurated a 1.5 km, three-lane track dedicated to autonomous vehicle trials, the first of its kind in Israel. The road was constructed on a segment of the Ayalon Highway, a major intercity freeway in the Tel Aviv metropolitan area. Mobileye, General Motors, and Tel Aviv-based Nexar Ltd. have previously made use of the road.
Related stories:
In December, Russian multinational technology company Yandex NV announced it had obtained permission from the Israeli Ministry of Transportation to conduct test drives of its autonomous vehicles in Tel Aviv. The same month, the company launched its taxi-hailing platform Yango in Israel.
Cancel Send
To all comments