If in 50 Years Libra Will Account for 5% of Global Transactions, it Will Be a Rousing Success, Says Facebook VP

On Tuesday, an association of corporations led by Facebook released the white paper for its new cryptocurrency, Libra, set to become available next year. Facebook and Calibra vice president Tomer Barel explained the new financial player in an interview with Calcalist

TAGS:
On Tuesday, an association of corporations led by Facebook released a white paper for its new cryptocurrency, Libra, set to become available next year. Unlike bitcoin and ethereum, Libra will be backed by non-speculative assets such as government bonds and bank deposits. The independent Libra Association—whose 28 current founding members include payment companies like PayPal and Mastercard, tech giants like Uber and eBay, and venture capital players like Andreessen Horowitz—aims to reach millions of users worldwide.

Facebook also announced a new cryptocurrency wallet for the coin, Calibra, to be launched in 2020. The wallet, as well as other Libra-related applications, are being developed by a wholly owned Facebook subsidiary of the same name. Israeli engineers, data scientists, designers, and product managers make up a few dozen of Calibra’s employees, and though they share office space with Facebook’s Israeli research and development team at its Tel Aviv center, Calibra’s operations will be separate when it comes to aspects such as the technological infrastructure or customer services. At the head of Calibra is David Marcus, a former PayPal president, who until recently headed Facebook Messenger. 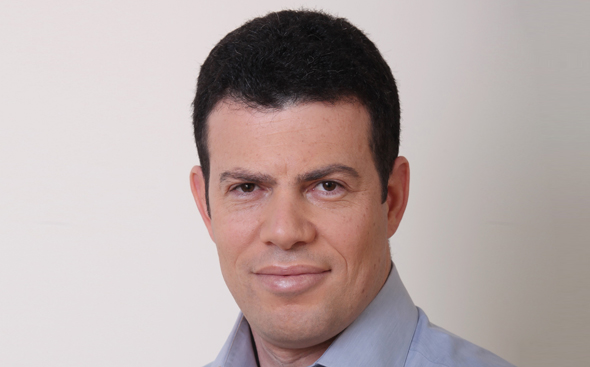 Facebook and Calibra vice president Tomer Barel. Photo: PR
Technology has revolutionized many industries over the past decade, Tomer Barel, a Facebook vice president of risk, operations, and blockchain and one of Calibra’s main power players, said in a Wednesday interview with Calcalist. While financial services have seen significant advances, mainly in user experience, the basic aspects haven’t changed, he said. “If I reside in one country and want to send money to another country, there will still be a 7% fee. In many areas of the world, it costs money to own a credit card or a bank account.” The tech revolution has yet to hit financial services, Barel said. “1.7 billion people in the world do not have bank accounts due to the fees involved, but a billion of them do have a mobile phone,” he explained. With Libra and blockchain, the association wants to lower costs and make payment services more accessible, he added. One of the main obstacles that stand in the way of wider adoption of blockchain-based cryptocurrencies like bitcoin is the issue of scalability, as there is a limit to the amount of data the network can process, making for slow transactions. “I do not want to wait 10 minutes to buy milk,” Barel said. The Libra Association has stated its intention to solve the problem by creating a blockchain network capable of handling a much larger number of transactions in real time but did not provide technical details on the nature of the system. Barel says the operational costs will be “very low, next to nothing.” Another main problem with bitcoin and other digital currencies is how they are created, or “mined,” via a series of complex computing processes that end up with an updated ledger. As they have no fixed value—a bitcoin is worth as much as people are willing to pay for it—their valuation varies widely and is purely speculative. You cannot accurately say something such as “one bitcoin is worth three bottles of milk,” like you can with other widely used currencies. Libra intends to solve the issue by maintaining a Libra reserve with real assets as collateral, minting and destroying coins as needed. To be widely used, currency has to be stable, Barel said. “If there will be a great demand for the currency, the association will mint coins, sell them, take the amount cashed in, and add it to the reserve. If there is a surplus of coins, the association will be able to cash out some of the reserve, use it to buy coins, and take them out of circulation,” he explained “We do not need a monetary policy,” Barel said. “We rely on the policy of global banks. We will use the leading global currency to dictate Libra’s valuation. Our goal is to make owning and paying with Libra accessible to everyone, in terms of both distribution and cost.” While Facebook may attempt to deny the statement, the mechanism Barel speaks of de facto makes Libra a central bank, similar to the Federal Reserve. A monitory body that can mint new currency and regulate its valuation—and one whose power and influence will be determined by consumers. If both consumers and businesses adopt the new coin gladly, it could turn the association into one of the global economy’s most powerful entities, with the sort of power once reserved only for nations. “Success, to us, means that in 50 years we will account for 5% of all global payments,” Barel said, adding that while Libra aims to be a main player, it does not plan for a day when it will no longer have to rely on the world’s leading currencies. But Libra has a few things already going for it compared to existing cryptocurrencies. The Calibra wallet will be available as an independent app, but also as a feature on Facebook’s messaging apps Messenger and WhatsApp, which have 1.3 billion and 1.6 billion users, respectively. This could mean, Libra may turn into the most-used cryptocurrency in the world on the very first day of its release. The Libra blockchain will also be open source, enabling Facebook’s partners, as well as independent developers, to create their own tools for Libra. “As of day one, users will have alternatives and service providers will compete with one another,” Barel said. To encourage users to choose Libra over other currencies, the association intends Libra to be used mainly in locations where financial services are either inaccessible or very expensive, Barel said. One example is the relatively high fees attached to payments, which make micro-transactions not worthwhile. “Think about countries where people cannot easily gain access to a bank, or where there is no trust in the local currency, for example, countries with a high rate of inflation,” he said. “This is an opportunity for such people to gain access to a currency that relies on the world’s strongest coins.” The founding members of the association, many of whom are significant financial organizations and payment processing service providers, are a vote of confidence in Libra, Barel said. “It is a statement about how they see the future.”
Related stories:
Like any innovative, groundbreaking venture, Libra could end up an expensive, embarrassing failure. But there are better than fair odds that Libra will succeed and become an accepted currency. It is not unlikely that in the future, when making a purchase on Booking.com or eBay, users could choose to pay in dollars, euros—or Libra. A wide variety of businesses and entities might find their own uses for the coin, putting their trust in the powerful players that make up the Libra Association. Libra’s 2020 launch could be a turning point for the global economy, one that will turn Facebook and its partners into key influencers in the global financial system—and raising a whole new host of regulatory, legal, and even ethical question that countries and global systems will have to face.
Cancel Send
To all comments