The Latest Status Symbol for Israeli Kids Is English-Speaking Preschools

While most of the Western world is busy teaching its kids Mandarin, Israeli parents spend thousands of shekels a month to send their kids to private English-oriented nurseries and kindergartens where they learn to name colors and sing songs by Michael Jackson and The Beatles

TAGS:
The Wonder school, located within one of Tel Aviv’s historic buildings, is one of Israel’s most expensive kindergartens. It charges about NIS 4,700 (approximately $1,330) a month in tuition and counts children from some of the country’s richest families among its students. The school has an unusually large staff compared to other public and private institutions in the country—three kindergarten teachers for each of four groups of 15 students. In comparison, the legal standard in Israel is one teacher per 11 infants between the ages of 25 months and 36 months. Each team of teachers is composed of one native Hebrew speaker and two native English speakers. The children are also carefully selected to promote bilingualism so that one third only speaks Hebrew, another third speaks nothing but English and the rest speak both languages. Wonder is just the tip of the iceberg in a line of bilingual preschools in Israel—which, truth be told, are English tutoring preschools, since no other languages are spoken in those institutes. If in the past, such schools were occupied by the children of diplomats and other temporary residents here on business, now there are dozens of them throughout the country. All of these institutions are completely private, charging hefty tuition and accepting children as young as six months old for a program that lasts until they enter first grade. 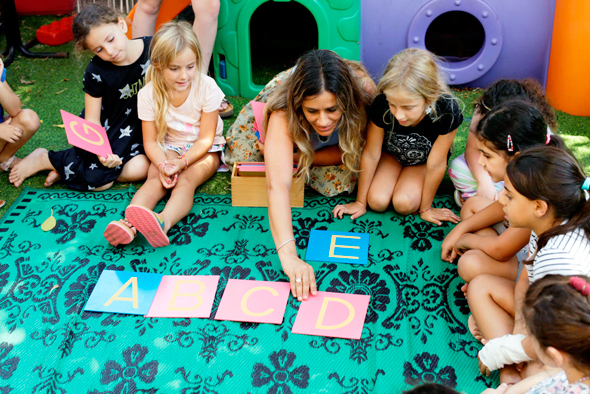 A class at the ABC Learning preschool in Be'er Ya'akov. Photo: Amit Sha'al
Wonder accepts children from the age of 21 months. At this age, people already begin to think about their child’s future employment prospects, Maya Lan, who heads the school, said in a recent interview with Calcalist. Some of these parents want their children to be able to work abroad or study at the best universities in the world, she said. According to Lan, bilingualism helps develop creative thinking and improves a child’s problem-solving capabilities. Per Lan, this makes for “top quality” alumni that do a lot better than average in tests. “Teachers can spot our children in a crowd,” she said. Dana Katz, a business development advisor for a company with global clients, sends her three-year-old daughter Alma to Wonder. “This year she is eligible for a state nursery, but it is a gift that is worth giving,” Katz said, adding that she just does not believe that a public-funded school could be at this level. “It is all a matter of resources,” she explained. Katz’s mother is Canadian and she grew up speaking English at home. “I just cannot imagine myself without this tool and I wanted to give that to my daughter as well,” she said. Katz had originally planned to speak English to Alma, she added, but it was too difficult. Now that Alma is surrounded by English speakers it motivates her to get better at it. “Now we speak English without even noticing,” Katz said, adding that Alma can speak in both an American and an English accent. Katz said she chose this school since “bilingualism helps people from different backgrounds connect and promotes pluralism.” But the reality of the school conveys something different. Despite some cultural variation, the kids in this school all have one major element in common—their parents’ financial situation. All of these children come from financially stable homes, with parents determined to translate this stability into practical advantages for their offspring’s future, be it is academic studies, career opportunities, or immigration options. Asked whether socio-economic background plays a major part in the child’s success, Lan claimed children are not admitted based on how much money their parents have, but based on their compatibility. There are two scholarships for kids whose parents cannot afford the tuition, so “even if you do not have the money, you can still get in,” she said. She did not specify what qualifications are required of babies in order to be deemed "compatible." It takes Eli Golan, a marketing professional from central Israeli town Ness Ziona, 45 minutes every morning just to get his two-year-old daughter Ronnie to a preschool called “Gan Anglit,” which is Hebrew for English Kindergarten. “I want my kids to have good English skills so that they can study at the best universities in the U.S. and the U.K.,” Golan, whose eldest son also went to the same school, said in an interview. Golan said he believes his kids should be able to choose what is best for them and that knowledge of English is at least as important as math for life in Israel. English has “both social and economic value,” he added.

Israel provides free public education between the ages of three and 18, which means some of these parents could potentially save thousands of shekels a month, yet still opt to send their children to expensive private schools, because they believe they are giving them a head start. In some cases, it has also become somewhat of a status symbol, with extra language skills being just one consideration meant to attract parents.

Orian Ashor, an accountant from central Israeli town Ramla, sends her three-year-old son Orr to a bilingual school called ABC Learning in nearby town Be'er Ya'akov. “It is important that Orr studies English because he will need it for practically anything he may choose to do in life,” she said. He will speak Hebrew no matter what his parents do, but “you can’t really manage in today’s reality without being fluent in English as well,” Ashor said.

Sapir Neumann, an architect from northern Israeli city Haifa, also believes English is as important for an Israeli child as Hebrew is. Neumann’s children, two-year-old Re’em and one-year-old Lirie, attend a bilingual nursery called Little People. Neumann speaks with her children in Hebrew while her husband, who she says has better language skills, prefers to communicate with them in English.

Re’em could go to a state-funded school next year, but that is not going to happen because public education cannot offer him the same advantages, Neumann said. Re’em has been going to Little People since he was seven months old. “I did not know if it would work and if he could actually speak English, but now he already knows his ABCs, he can count, and he can name colors and animals,” she said. When he enters the first grade he will already have a substantial head start that will give him confidence and help him do better in school, she added. Parents want their children to absorb the language from an early age, Reut Lev, head of Little People, said in an interview. They have high aspirations and they want their kids to go to the best universities, and in order to be able to do that they have to start working hard early on, she said. “Our students have less trouble handling themselves abroad, so this also helps parents who are considering a relocation,” she added. The children at Little People come from wealthy homes, Lev said. The demand for openings for children aged between three and six is the highest, and that is very flattering because at these ages parents could just send their kids to a free state kindergarten, she added. According to Lev, the school is partly subsidized by the state, but only up to a sum of NIS 700 (approximately $200), so parents still pay a hefty sum.
Related stories:
Lev believes that the language is better absorbed by the children thanks to the non-frontal educational approach of the school. As to the level of English the students achieve, she said they can name colors and animals and are familiar with some basic words and also with some songs. “Sometimes they sing songs by Michael Jackson, and the older kids know songs by The Beatles,” she said.

While some parents credit the English-speaking preschools with their children's academic success later on, some remain skeptical. One mother who spoke to Calcalist but preferred to remain anonymous said that despite going to a bilingual preschool, her daughter does not really speak English, but only knows some colors and songs. “Maybe it is because we do not practice at home, but I do want to believe that she will absorb some of it and that it will end up helping her in school,” she said.