Benny Landa's Lucy in the Sky With Diamonds

The printing multi-millionaire’s newest venture has him cooking diamonds in a central Israel lab, in a process he describes as “alchemy”

TAGS:
Benny Landa is one of those entrepreneurs with their eyes fixed on the horizon. Throughout his busy and varied career he had always managed to plan many steps ahead. When he faced problems, he treated them not as failures but as inevitable bumps in the road. Now, aged 73, he has set his sights on a whole new venture, and it is sparklier than ever. In his central Israel lab, Landa is making diamonds.

More than a quarter of a century has passed since Landa founded his printing business Indigo, which he sold to HP in 2001 for $830 million, but Landa is not one to rest on his laurels. Immediately following the sale he founded Landa Labs, a venture that combines nanotechnology research labs with a startup incubator, which gave rise to a number of successful companies. 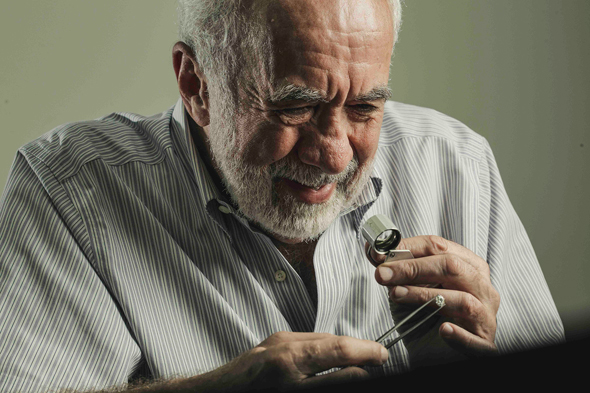 The venture was also the birthplace of Landa Digital Printing, which develops industrial digital printing technologies for the commercial, packaging, and publishing markets and holds some unique nanometric printing patents. Landa invested hundreds of millions of dollars of his own money when he betted on the company, and it took 15 years of business and technological development before it finally started manufacturing its printers earlier this year. In the meanwhile, the company raised $700 million in funding according to a company valuation of $1.8 billion. Forty years of activity, two huge companies worth hundreds of millions of dollars.

"When will I retire?" Landa asked laughingly during a recent interview with Calcalist. "My dream is that on my last day on earth, someone will want to enter the lab and find the door jammed. When they finally get it opened, they'll discovered it was my dead body on the floor that blocked it."

The interview was held at the manufacturing facility of Lusix Ltd., Landa's newest venture. The facility is packed with giant machines, black cubes as wide and as tall as a man, arranged in long rows. Each machine has a plethora of cables attached, giving them a look reminiscent of the giant IBM computers that characterized the start of the computer era. Welcome to Landa's newest fantasy: diamond printers.

Named Lusix as a reference to the iconic Beatles song Lucy in the Sky With Diamonds, the company started out as one of many ideas floating around at Landa Labs, was eventually given independent life, and left to brew for seven years, three and a half of them as an actual company. In the past few months the investment started to bear fruit as Lusix launched commercial manufacturing, first only for its own stockpile and more recently diamonds sold to jewelers and gemstone retailers.

"It is exciting because it is alchemy, it is magic," Landa said. "It is not turning lead into gold but rather carbon-rich methane gas—cow farts, excuse my French—into diamonds. And doing it in a process that uses infrastructure similar to that used in the semiconductor industry, only here the result is not a chip but a sparkling, high-quality diamond that is chemically identical to a mined gem."

Natural diamonds are brought to life in the depths of the earth, hundreds of kilometers below the planet's mantle, under extreme heat and pressure conditions. According to Landa, Lusix's diamonds are also grown in a natural process of atomic self-creation. The only difference is that they are created above ground instead of below it.

Each machine possesses a reactor—a small, sterile, and scorching chamber where a diamond seed is placed. The seed, a flat square slice made from natural diamond, is then exposed to a gassy cocktail made mostly of methane. 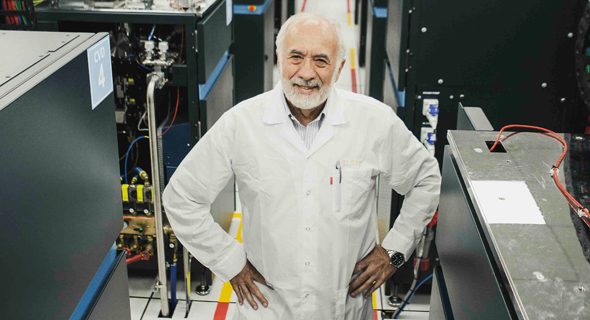 Lusix uses the chemical vapor deposition technology, which is also used in the semiconductor industry, CEO Silviu Reinhorn explained. The gasses are heated to 5,000 degrees Celsius, causing molecular bonds to dissolve and charging the gasses' atoms. The result is "glowing" plasma, according to Reinhorn. Under the right conditions, the carbon atoms rebuild in layers over the diamond seed, resulting in a diamond within two to three weeks. "If you don't know how to create the right conditions, the result is graphite or a cloudy diamond."

Each Lusix machine cooks dozens of diamonds simultaneously. Currently the company has 35 operational machines, but their number is set to reach 75 by next year. Landa is already examining locations for a bigger facility capable of housing 300 machines. The products are sparkling diamonds one to three carat in size, mostly clear but some also in luxurious pink and blue.

How does a man who worked with printers all his life suddenly become interested in diamonds? By chance. To create nano-pigments for Landa Digital Printing, the company developed a very thin diamond coating for electrodes. "Around eight years ago, the head of the project Yossi Yayon came up to me and said, Benny, we create such exceptional diamond coating, I think we could develop the technology for 3D and create gemstone-quality diamonds," Landa said. "That's how it started."

He realized exactly what he had in hand with the first diamond Yayon brought him from the lab, yellow and cloudy as it was. Despite the bad quality, Landa understood that now it was just a matter of time. "We faceted it, and I gave it to my wife. Now she already has three generations of diamonds—the first, dirty one, the first high-quality pink we achieved, and now she also has a clear three carat diamond."

According to Landa, Lusix's biggest hurdle is not technological but rather operational. Industrial manufacturing of lab diamonds caught on only recently, in 2016, creating immediate chaos in the traditional diamond industry, which is one of the strongest and most well-connected industries globally. The industry launched a prompt counter attack, starting a media campaign that highlighted the differences between "real diamonds" and "artificial" or even "fake" diamonds, as they were derogatorily called. The Israeli diamond exchange—the largest diamond exchange in the world—launched its own campaign under the slogan "I love natural diamonds," which was quickly adopted by other traditional players in the world.

Lab diamond manufacturers, in their fight for public favor, highlighted their lessened environmental impact, and the fact that the creation of their diamonds, unlike traditional mining processes, did not involve human rights abuses or fund totalitarian regimes and violent guerrilla groups. The breakthrough came when "Blood Diamond" star Leonardo DiCaprio invested in U.S.-based lab diamond company Diamond Foundry. Last year, manufacturers won a major battle when the U.S. Chamber of Commerce decreed that lab diamonds cannot be called synthetic or fake.

"A diamond is a diamond, whether it is created below or above ground," Landa said. "They are trying to say we are fake, like a fake Rolex manufactured in China. But in those cases, the materials and the final product are low quality. Here the result is identical."

The traditional industry will lose the battle in the end, Landa said, as no traditional industry has ever managed to halt technological development. The old mines are closing, and no new mines are being opened. Lab diamonds will become more and more popular, especially among millennials, who are much more conscientious of environmental and social injustices, he said. 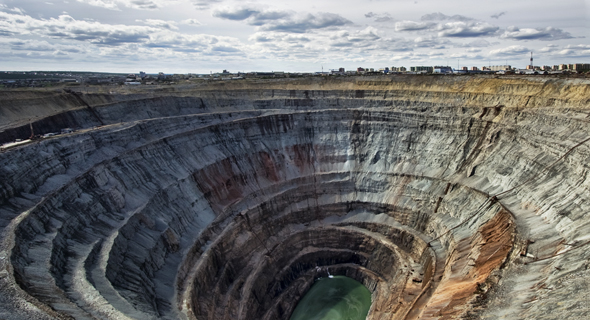 An abandoned diamond mine in Siberia. Photo: Shutterstock

"Look at this mine in Siberia," Landa said, displaying a photo. "A huge wound 600 kilometers deep in the earth. Trucks move tons upon tons of dirt for one carat of diamond, something you can also create in a machine. You can't bury the history of blood diamonds—abuse of children, money poured into weapons and revolutions. If you want to laude natural diamonds, you need to remember that part as well. It will therefore take time, maybe even generations, but lab diamonds will replace mined diamonds. Only one thing will remain a constant—people will continue to love all that glitters."

Some traditional players have already come to that realization, like the De Beers corporation, which got its start in colonial Africa in 1888 with founder Cecile Rhodes. The group launched a symbolic jewelry operation with lab diamonds in 2018, deliberately branding them as something lesser. But it was a crack in the façade of the diamond mining industry. They thought they could use lab diamonds to boost their mined diamond business, but the result was the opposite, as the rest of the world now wanted in and the price of lab diamonds jumped, Landa said.

While Lusix is still small, less than 100 people, Landa wants to create a new Israeli industrial branch. He has invested a few tens of millions of dollars in the company so far, but in the future he expects external investors to invest a few hundred million. Lusix's uniqueness is that it is one of the only companies in the business capable of creating completely clear diamonds, he said, and the fact that all its technology and manufacturing are developed and created in-house makes it more efficient and cost-effective. The fact that they are capable of creating a pyramid-shape diamond is also more efficient, as it means they can use 70% of the raw material instead of 30% like other manufacturers, he said. His target audience is commercial—the young couples buying engagement rings, not multi-millionaires.

Currently, despite their somewhat “lesser” status, lab diamonds only cost 30% lest than their natural counterparts. This is because they make only a very small part of the market, and prices will not change until they are at least 10%, Landa said. As diamonds are priced according to the Rapaport price chart, no single player can change their price. “Maybe in 20 years lab diamonds will break the market,” Landa said, but people will have to wait at least 15 years for “low-cost” lab diamonds. Companies are also far from optimizing the technology energy-wise, Landa said.

Does Landa have 15 years to wait, like he did with Landa Digital Printing? He thinks so. “The average lifespan for an Israeli male is 83,” he said, before opening the website of an American insurance company and inputting his personal information: gender, ethnic background, weight, marital status, level of physical exercise, and more. “90! Pretty good, eh?”

Throughout his life, his businesses have always hedged the long bet, part of the reason he never went public with the companies he founded. “I was poor and I was rich, I remained private and was public. Rich is better than poor, private is better than public.” With public companies, shareholders are always thinking about the next quarter, which doesn’t enable long term vision, he said. “Who would have invested in Indigo or in Landa Digital Printing, knowing it would take 15 years to bring a product to market? You can’t disrupt industries on the public’s dime.” This is, of course, only an option if a company has money of its own.

Landa always bootstraps his companies until he runs out. He invested $300 million of his own money in Landa Digital Printing, only looking for outside support when he couldn’t add any more. German businesswoman Susanne Klatten invested $500 million in the company over the past five years through her companies SKion GmbH and Altana AG. Previously, he only had one investor in Indigo, businessman George Soros, who infused $50 million into the company in 1993. “You don’t invest that kind of money unless you have very good reason. I believe we will also reach that stage with our diamonds.”