Mariela Alfonzo’s company, State of Place, develops software that analyzes how friendly a given environment is for pedestrians and calculates the costs of plans to improve walkability against their potential financial benefits

TAGS:
Walking is becoming more difficult than ever. City streets are overcrowded and under-shaded, and their sidewalks are packed with parked cars, obstacles, bikes, and electric motorized vehicles, all thwarting the basic human function of moving around independently. Urban design researcher Mariela Alfonzo is out to change that. Creating an environment that encourages walking is good for business, she said in an interview with Calcalist during a visit to Israel last month. A street planned with walkability in mind is one with more shoppers and restaurant-goers, which bring rent prices up as business owners are willing and able to pay more, increasing the city’s income from taxes, Alfonzo said. 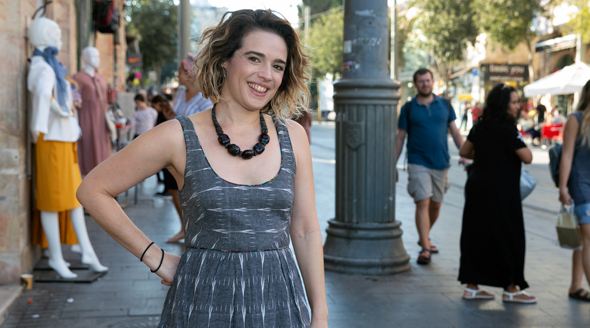 Mariela Alfonzo. Photo: Amit Shabi
Alfonzo, 40, grew up in Miami, which she says is designed with drivers in mind. This drove her to an interest in ways to improve the lives of city residents from an early age, leading to a PhD in city planning and a career as an urban planning consultant. In 2016, Alfonzo founded Boston-based urban planning analytics company State of Place, incorporated as Urbanomix Inc. State of Place develops software that analyzes how friendly a given environment is for pedestrians and calculates the costs of plans to improve walkability against their potential financial benefits. Cities are normally aware of the costs of making changes to the way streets are built and organized but are less aware of the inherent profit and benefits they entail, Alfonzo said. State of Place’s software offers estimates of financial gains to be made by every set of changes recommended by the company, she added.

State of Place’s clientele is composed of cities that are looking for ways to make the urban space better and want to know how and where to invest their money, as well as private developers interested in upgrading their properties and increasing profits, Alfonzo said. State of Place is also working with Switzerland’s national train company Swiss Federal Railways, to make the streets around stations more appealing in order to encourage people to take the train, she added.

According to Alfonzo, the main thing that has to change is the cities’ approach to walkability. In many cases, cities view urban density—which is essential to creating a successful urban scape—as a bad thing and work to promote motorized transportation at the pedestrians’ expense, she said.

It can be very expensive to change a city’s design, so many municipalities are hesitant to start the process, Alfonzo said, adding that her software can also adjust its recommendations to fit within a given budget.

According to Alfonzo, there are two approaches to improving walkability. One is a massive reorganization of the urban space, which takes time and huge financial investments. The other, a lighter-quicker-cheaper approach that requires smaller but more immediate steps. As an example of the second approach, Alfonzo gives Asheville, North Carolina, where last year, in an effort to slow down traffic and encourage pedestrian activity, huge butterflies were painted in the middle of the road. People started wanting to walk there and it began paying for itself very quickly with more pedestrian traffic boosting local businesses, she said.
Related stories:

As a native of Miami currently residing in Shanghai, Alfonzo has some ideas for improving walkability in cities with hot climates, such as Tel Aviv. The best thing for warm areas, she said, is to keep streets narrow. A narrow street, with buildings close to each other and some trees, would be well-shaded throughout the day, she said,

When it comes to electric-scooters, considered by many to be the pedestrian's enemy, Alfonzo offers a more appeased approach. She believes that it will take time to adjust and figure out the right way to approach this new technology. Pedestrians are the most vulnerable players on the street so they should take precedent, but good sidewalks should enable many different means of transportation, she said. It is just a matter of accommodating different speeds, it should not be that difficult, she added.
Cancel Send
To all comments