Anti-vaxxers have existed under the radar for a long time, but in recent years unheard-of outbreaks of nearly eradicated diseases, like measles or polio, brought the situation to a head

TAGS:
Earlier this month, Nasdaq-listed BioMarin Pharmaceutical Inc. announced optimistic results in its phase 2 clinical trials of Vosoritide. The injectable drug was developed with the intention of helping people with achondroplasia, a common variant of dwarfism, which occurs in 1 in 25,000 births. The drug promotes normal bone growth in children with this condition who would otherwise likely suffer from a lifetime of associated skeletal problems that often require multiple surgeries and result in chronic pain. Phase 3 results—the final phase in the U.S. Food and Drug Administration (FDA) approval process—are due by the end of the year. This breakthrough drug has the potential to help many of the nearly 40,000 children born with achondroplasia annually in the U.S. grow taller and healthier than they would have otherwise. However, not everyone is thrilled. There are many within the little people community that celebrate their condition, do not consider their short stature to be a disability, and do not feel that it needs to be fixed. 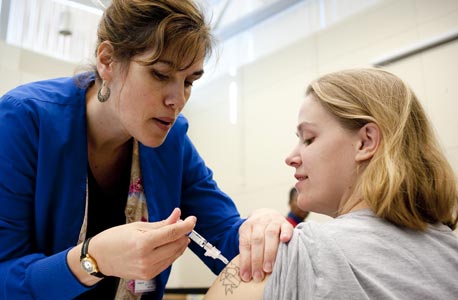 Vaccines (illustration). Photo: Bloomberg
Pride in one’s medical condition that most would construe as a disability is not uncommon. For example, the conventional use of prenatal genetic testing and abortion to prevent the birth of children with Down syndrome, who often suffer from intellectual disabilities but who can also look forward to a potentially fruitful life with an average lifespan of 60 years, has been called eugenics and even genocide, particularly by those with the syndrome. Eight U.S. states have enacted legislation banning abortions that are based solely on the prevention of births of children with Down syndrome, although Ohio’s effort was ruled unconstitutional last month. Also in October, two Oklahoma senators introduced a Federal bill that would see abortions based on an assumption that the unborn child has Down syndrome, illegal in all 50 states.

Similarly, in a powerful paper, author Sarah Kurchak wrote in 2015 about how she feels dehumanized when parents choose to risk the lives of their children by not vaccinating them, due to unfounded and unscientific fears that their children will become autistic.

Autistic herself, Kurchak stressed that she leads an enjoyable and valuable life, and as she put it: “someone who refuses to vaccinate their children because they’re afraid of autism has made the decision that people like me are the worst possible thing that can happen to their family, and they’re putting everyone at risk because of it.” More recently, earlier this week, author Sam Farmer wrote an analogous article on disability pride, describing how his Asperger’s profile, a condition on the autism spectrum, provides him with unique abilities and is more of a blessing than a curse. “Many of us on the spectrum feel strongly that we do not need to be fixed or cured. Many of us do not want to be seen as 'defeating the diagnosis' whenever we succeed at something. We own our differences. They are not medical symptoms. They are part of who we are.” Of all the disability communities that see their condition differently than conventional wisdom might dictate, the deaf community is usually the most vocal. In the 2000 Academy Award-nominated documentary Sound and Fury, we saw the surprisingly negative reaction of members of the deaf community to cochlear ear implants that can provide some hearing ability to the deaf. In fact, many in the deaf community do not perceive their inability to hear as a disability, rather they see themselves as part of a unique culture with its own language. In 2002, a deaf lesbian couple stirred a huge controversy when they specifically sought out a deaf sperm donor hoping that their child would also be deaf. Assisted Reproductive Technologies (ART) have advanced substantially since then. With the current state of the art, parents now have the potential to actively and specifically choose to have a quote-unquote disabled child. Using the same technologies, like readily available preimplantation genetic diagnosis (PGD) tools, that many couples employ to prevent the birth of severely disabled children, there is little to nothing stopping couples who are deaf or have dwarfism or Down syndrome from intentionally choosing to have a child that shares their condition. In many jurisdictions, there are no requirements to keep track of how often this occurs. This general lack of oversight could even allow a parent suffering from Munchausen syndrome by proxy (MSBP)—a mental illness which afflicts 1% of the population wherein a parent might harm their child in an effort to gain attention—to choose to have a child with severe disabilities.

While we would all consider it heartless to prevent couples with genetic disabilities from procreating naturally, even though there is an increased likelihood that their child will have a similar disability, many still have a visceral reaction to the use of technology to intentionally bring a child into a world where the majority see their congenital condition as a disability and a burden. Notably, many would also react negatively to parents who would employ ART and PGD to have children with enhanced abilities, height, and IQ levels, even if it were currently possible.

The concern raised here is not new. Academics have debated over this issue for at least a decade and known instances where parents have actually gone through IVF and PGD to have a disabled child are still rare enough that each case makes the news. Moreover, such cases also require an unlikely cohort of complicit clinics, nurses and doctors. This being the case, you may be wondering why this issue still merits further discussion. As more drugs and technologies like Vosoritide are developed to treat and perhaps even cure children with rare disabilities, the above debate has taken on a renewed vigor, as parents can simply choose not to treat a treatable child without arousing suspicion or debate. It may seem unlikely that an otherwise caring parent would choose to not treat a child, but the anti-vaccination community may serve as a precedent. Anti-vaxxers have existed under the radar for a long time before the situation came to a head in recent years with unheard-of outbreaks of heretofore contained diseases like measles or polio. Imagine a utopian world where the handful of exceedingly rare deaths from autonomous vehicles outnumber the deaths from cars driven by humans. We are already there with some diseases. Because of the efficacy of vaccines, people tend to overlook the dangers of the disease itself and focus on the rare cases of vaccine-related complications. This ignorance is holding us back from eliminating additional diseases.
Related stories:
Parents’ decisions to not treat their children with the universal medical standard of care, namely, vaccinations, are part of the cause of far too many deaths from those persistent diseases that we have yet to eradicate. In the Congo, 5,000 measles-related deaths have been reported since 2018, more than twice as many as the dreaded Ebola. A measles vaccine has been around since 1963, yet 110,000 people still die from the disease every year. Ironically, particularly those parents in the West who claim to be woke enough to fight the patriarchy of medical establishment using Google and to refuse to vaccinate their children, are not yet woke enough to appreciate the intersectionality between their own ableist discrimination against the non-normative autistic population and the grievances their children will likely have when they are oppressed by a disease that they should have been immune to. Dov Greenbaum, JD PhD, is the director of the Zvi Meitar Institute for Legal Implications of Emerging Technologies and Professor at the Harry Radzyner Law School, both at the Interdisciplinary Center (IDC) Herzliya.