A Gamer, a Geneticist, and an Employment Law Attorney Walk Into an NCAA Football Game

Student-athletes are not paid and do not fall within the employee-employer rubric. This means their DNA data is not protected by privacy-related labor laws

Professional athletes have long collected royalties from the depiction of their increasingly hyper-realistic likeness in video games. Such depictions have also been the cause for multiple lawsuits made by athletes against game developers, one of the more recent cases being against Electronic Arts Inc., the developer of the Madden NFL football video game series, which recently released its 20th iteration. The case was settled outside of court in March, with EA agreeing to compensate over 6,000 former NFL players for using their likeness.

Even the families of the unfortunately growing number of players who have passed away in the middle of their careers can continue to collect royalties on games that depict their loved ones' likeness, albeit depending on the jurisdiction, with California recognizing a posthumous right, while New York does not. Former college athletes have also successfully sued EA to profit off their likeness in these types of games. 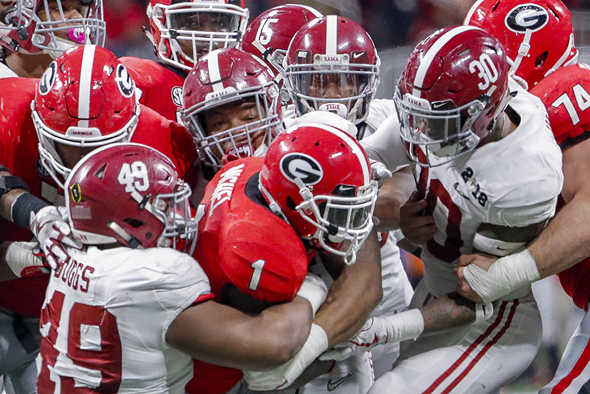 But the one group that heretofore has never been able to collect on the use of its likeness is active college athletes that are members of the National Collegiate Athletic Association (NCAA). The NCAA is the largest umbrella organization for collegiate sports, representing nearly half a million athletes in over 1,200 academic institutions in the U.S. and bringing in annual revenues of close to $1 billion.

The NCAA is notorious for being excessively restrictive with student compensation for their athletic efforts on and off the field and particularly draconian in enforcing those restrictions in the name of what it defines as amateurism.

Though ostensibly and emphatically amateurs, according to the NCAA, these students are actually nonprofessionals in title only. This legal fiction is exacerbated by the hundreds of millions of dollars in revenue that these athletes bring to their academic institutions as a direct result of their athletic achievements. Ironically, the unpaid athletes' coaches are often the highest-paid public employees in most U.S. states.

But things are beginning to change and last week, the NCAA voted to update its outdated rules. Eventually, according to the vote, the NCAA will allow students to at least profit off of their likeness when used for commercial purposes, including in video games. It is not clear, however, when these new rules will come into effect.

The lack of a clear timeframe is telling. While the NCAA claims that its decision came about as a result of internal consultation, it is much more likely their hand was forced by emerging legislation that seeks to challenge the NCAA’s longstanding and often-embattled idea that college athletes are amateurs should not get any financial compensation for their efforts.

One of those laws threatening the NCAA’s position was recently passed in California. The Fair Pay to Play Act, scheduled to go into effect in 2023, would allow college athletes to profit off of endorsement deals. With other states lining up to pass their own similar laws, the NCAA had to respond.

To wit, before its most recent announcement, the NCAA had previously threatened to ban all California universities and colleges from competing in an NCAA championship, because of the new law. The more cynical commentators think that the NCAA announcement is intended to only hold off additional legislation, and that the NCAA will never actually change its long-standing regulations regarding athlete remuneration.

The issue as to whether collegiate athletes can retain the supposed aura of amateurism is enduring and entrenched. One seemingly intractable issue relates to the employee status of NCAA athletes, especially those who are academic scholarship recipients. Various recent and ongoing legal disputes have raised significant questions as to the exact nature of the student-athlete-university relationship, particularly in light of the increasing number of graduate students that are unionizing. As such, vague case law will continue to create substantial uncertainty as to whether athletes can be statutorily protected by laws that safeguard employees until the issue is finally settled.

However, GINA is only relevant to cases in which a legally recognized labor relationship exists, such as in the infamous case of the "devious defecator" on which in 2015 an Atlanta judge ruled in favor of two workers who had been forced to take DNA swabs when their employer believed they were defecating in its warehouse. State genetic discrimination statutes are also typically limited to employee-employer relationships.

This vulnerability is especially relevant as student-athletes, like all athletes, likely to be genetically tested under a professional capacity, especially to determine their athletic limitations. Effectively, as these students do not fall within the employee-employer rubric, their data is not protected by many of the laws and privacy safeguards available to other workers.

The culture surrounding college sports in the U.S. is unique, with many Americans following college sports diligently and fervently, as much as, if not more so than, professional sports. Nevertheless, and in spite of many efforts, the courts steadfastly retain the legal fiction that the thousands of college athletes across the country who receive a grant-in-aid athletic scholarship covering tuition, room and board, books, and additional fees are not employees, and are in fact only students that “should be motivated primarily by education and by the physical, mental and social benefits to be derived.”

For example, in a 2016 ruling by the National Labor Relations Board (NLRB), while finding that graduate students could be considered employees with all the attendant benefits, nevertheless, like previous cases, the court refused (in a footnote) to even consider the employee nature of student-athletes.

In addition to the NLRB ruling, also in 2016, the U.S. Supreme Court declined to hear an appeal in O’Bannon v. NCAA, a class action suit pertaining to whether the NCAA rules were an unlawful restriction on trade and a violation of antitrust laws. The Supreme Court’s denial of cert left in place the earlier Ninth Circuit ruling that found that while some amateurism rules of the NCAA violate antitrust laws, those violations could be easily remedied without altering the amateurism status of the student-athletes.

Even with this distinct lack of relevant precedent, NCAA amateurism rules remain tenuously in place and until recently, immune to antitrust litigation.

This effectively means student-athletes receiving athletic scholarships can likely be required to participate in genetic testing without the privacy protections provided by the relevant employment laws, and without even the ability to collectively bargain away such rights in exchange for others, as other professionals may do, such as in the 2009 case of 14 Penn Plaza LLC v. Pyett 2009.

The discussion is still ongoing. In August, the U.S. Ninth Circuit dismissed an appeal in Dawson v. NCAA from college football players who had sued to have the NCAA recognized as their employer. The court, however, did not tackle the more complex issue as to whether the students were employees of their respective academic institutions.

Whatever the end result of NCAA players’ employment status, gamers are counting on at least one silver lining—with rules on collegiate athlete likeness soon to be clearly spelled out, they will finally see a return to college football video games with legitimately licensed players’ likenesses after an intolerably long hiatus.

Escaping the Trap of the Valuation Cap
Recommended videos