Israeli cycling team Israel Cycling Academy (which has recently changed its name to Israel Start-Up Nation), will pilot technologies developed by Physimax Technologies Ltd. and Biobeat Technologies Ltd. for its international pro team, set to participate in this year’s Tour de France. Israel Cycling Academy is owned by Israeli-Canadian billionaire Sylvan Adams, who in 2018 financed most of the Israel segments of cycling competition Giro d’Italia. 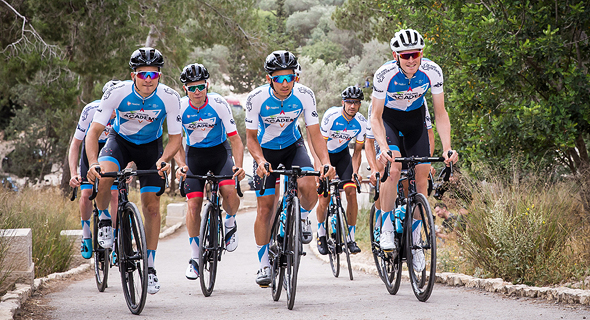 Israel Cycling Academy at Giro d’Italia. Photo: Oz Moalem
The cycling team met with eight health and sports startups before choosing the technologies for the pilot, at an event that took place last week at the offices of Tel Aviv-based nonprofit Start-Up Nation Central. The team announced a partnership with the nonprofit in December, under which the team took on the organization’s name. Start-Up Nation Central set up a special task force to research the special needs of cyclists and scout for relevant technologies. Among the technologies presented at the event were monitoring tools for the athletes’ physiological conditions, nutrition, sleep quality, and mental health.

Paulo Saldanha, the Israel Cycling Academy’s performance director, is only interested in one thing: helping cyclists meet their potential. “To achieve that, I have to understand the athletes’ physiology and measure it and we have to be innovative,” he said in an interview with Calcalist.

The team is already measuring pace, time, and heart rate but the challenge is gathering the data and knowing how to use it, Saldanha said. New technologies can find patterns in the data and help us make more informed decisions, he said.