On Saturday, thousands of spectators cheered at the sidelines as the riders of Giro d’Italia made their way onto the streets of Tel Aviv

TAGS:
On Saturday, thousands of spectators cheered at the sidelines as the riders of Giro d’Italia made their way onto the streets of Tel Aviv, on the second day of the tournament’s three-day launch in Israel. Italian cyclist Elia Viviani won the 167 km segment from Haifa to Tel Aviv with a time of 3:51:20. Israel’s inclusion in this year’s route would not have come into being, had it not been for Israeli-Canadian billionaire Sylvan Adams, who financed most of the tournament’s Israeli segment, together with the Israeli government.

Like France’s Tour de France, the Giro d’Italia is held primarily in Italy, and though it does pass through nearby countries some years, 2018 is the first time a stage of the race is held outside Europe. 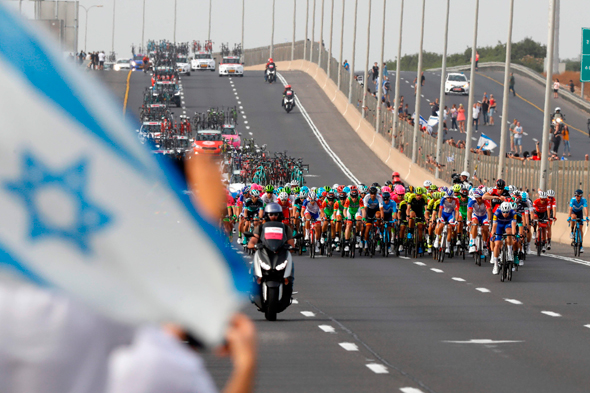 The second day of the Giro d’Italia. Photo: AFP
Mr. Adams, a former real estate developer and cycling enthusiast who moved to Israel in 2016, has taken several steps to advance the sport in the country. He is the co-owner of Israel Cycling Academy, the country’s currently only professional cycling team, set up in late 2014 and currently competing in the Giro d’Italia, another first for the tournament. Mr. Adams is also the visionary force behind Israel’s first Olympic velodrome, currently being constructed in Tel Aviv, and has provided over half of the NIS 70 million ($19 million) needed for its construction. The velodrome—a 250 meters indoor cycling race track—is set to finish in September. Mr. Adams has stated that he hopes to put Israel on the map as a cycling power and help viewers see another side of Israel. The sums Mr. Adams and the Israeli government invested in order to add Israel to the route of the race has led human rights activists, European parliament members, and members of the Boycott, Divestment and Sanctions movement, a global campaign that aims to place economic and political pressure on Israel to end the occupation in the West Bank, to lobby against the decision ever since it was announced last year. The RCS Media Group, which organizes the Giro d’Italia, has made clear it wants to steer away from political discussions regarding the decision, stating that it is a sports event and should be treated as such. Israeli officials, however, are hoping to leverage the popularity of the race to showcase another aspect of Israel. Israeli Minister of Public Security Gilad Erdan stated last year that the decision to start the competition in Israel “strengthens Israel’s legitimacy,” while Minister of Tourism Yariv Levin called it earlier this month a gift for Israel’s 70 anniversary. The backlash against the decision to hold the race in Israel gained momentum following recent altercations the Israeli military had with Palestinian protesters, who have been holding weekly demonstrations in the Gaza strip since the end of March, attempting to breach the fence at times. Critics such as Amnesty International have accused Israel of trying to “sports-wash” its reputation by holding the Giro d’Italia. “Sport is a great vehicle to build bridges,” Mr. Adams said Saturday in an interview with Start-Up Nation Central (SNC), a nonprofit organization that connects international businesses with Israeli startups “people like sports, and sports fans are usually not political”. Two teams from Arab countries are currently competing in Israel alongside the Israeli team, Mr Adams noted, adding that “sport can erase differences, erase politics.” His next venture is a sports institute in Israel that will be conducting applied research on high performance sports, the first of its kind in the country, Mr. Adams said. “This will benefit Israeli athletes, but when we publish papers it will benefit athletes all over the world.”
Related stories:

While Israel is more recognized for its innovation in domains such as cybersecurity, automotive technology and digital health, more and more Israeli startups are currently entrepreneurs focusing on sports technology. Israel currently has 103 startups focusing on sport-related technologies such as performance analytics and sports broadcasting, up from 61 in 2013, according to SNC data. Most have been founded in the last five years.

The Giro d’Italia riders are currently making their third and last leg of the competition in Israel, with a 229 km ride from southern city Be’er Sheva, through the Israeli desert, to the country’s most southern point, resort and port city Eilat. Monday will be a rest day, and on Tuesday the riders will launch from the Italian city Catania, to continue the 21-day competition.
Cancel Send
To all comments