Yair Schindel was a decorated army medic, a doctor, an entrepreneur, and the head of Israel’s National Digital Bureau. Now, he manages Israeli venture capital fund aMoon and wants to turn Israel into a healthtech empire

TAGS:
If you ask Yair Schindel, head of Israeli venture capital fund aMoon, it is healthcare technologies, not cyber, that will ultimately put Israel on the global tech map. “How big is the cyber sector? $100 billion? $150 billion? The healthcare market is 100 times that, a tsunami of $10.5 trillion,” Schindel, whose fund focuses on life sciences with $1 billion in assets under management, said in a recent interview. Israel is already seen as a leader in cyber, Schindel said. “If the world will also know that Israel is an exporter of health and longevity and of growing old in a healthy way, it will be a very strong brand. 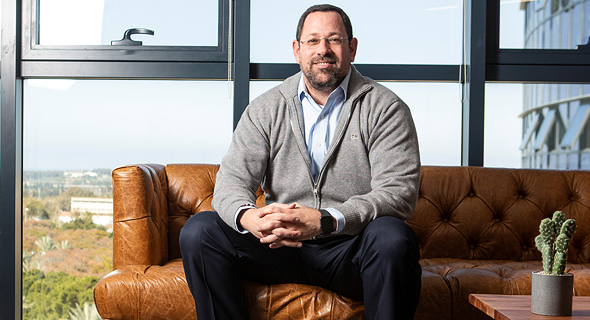 Yair Schindel. Photo: Tommy Herpaz
Schindel believes the local healthcare sector has the potential to produce at least 10 more mega-companies like Teva Pharmaceutical Industries Ltd., which currently has a market capitalization of $13.35 billion on NYSE, and Check Point Software Technologies Ltd., which trades on Nasdaq at a market capitalization of $17.04 billion. In 2017, when Mobileye was sold to Intel for $15.3 billion, Schindel was the head of Israeli government agency the National Digital Bureau. “I saw how much added value the budget boost generated,” he said. “The implication for Israel’s economy is dramatic. It is not just the people who will work at those companies, but everything adjacent—they will grease the wheels of the gross domestic product (GDP).” Israel is focused on how to divide the budget instead of on how to enlarge the budget, Schindel said, but health tech has the potential to double the current budget, which stands at almost NIS 500 billion ($146.2 billion), and increase the GDP per capita from $40,000 to $80,000 within five years. Schindel, 45, seems an appropriate choice to spearhead Israel’s evolution into a healthtech empire. Born to a family of physicians, he was the lead doctor of Israel’s marine commando unit the Shayetet and received a commendation for his actions in combat. After leaving the army and receiving an MBA from Harvard, he founded one medtech company and helped start another two, was involved in the founding of Maoz, a public service leadership program, and was tapped to head the National Digital Bureau. In 2017, Check Point Software Technologies Ltd. co-founder Marius Nacht, one of Israel’s self-made billionaires, came to him with a dream to launch a giant healthtech project in the country.

“To me, everything has to do with zionism, and with healing,” Schindel said. “In our fund, alongside traditional parameters such as returns, we assess each company by how many patients it touched.”

Nacht and Schindel founded aMoon—whose website states its goal of partnering with teams who use technology and cutting-edge science to accelerate cures for the world’s most life-threatening conditions—while nursing his father, who was dying of cancer. aMoon’s first fund was created with $250 million entirely out of pocket. Today Nacht is not actively involved in the fund’s operations. It took Schindel less than a year to raise $650 million in commitments for aMoon’s second fund, and another $120 million for an early stage fund. Alongside Nacht, investors include billionaire Morris Kahn and private Israeli investors, as well as U.S. institutional investors. 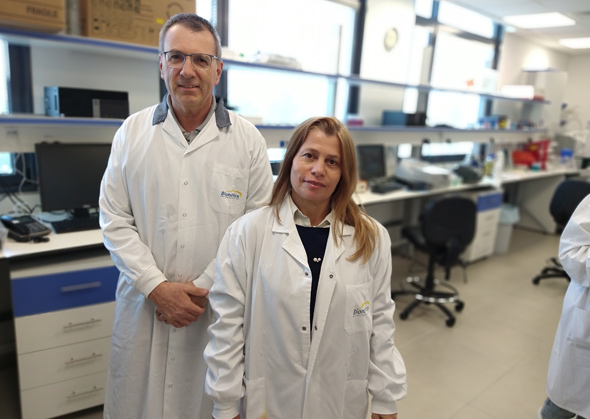 BiondVax's Ron Babecoff (left) and Tamar Ben-Yedidia. Photo: BiondVax
One possible nearby IPO is that of Ayala Pharmaceuticals Inc., a clinical-stage company developing therapies for genetically-defined cancers. aMoon led the company’s first $17 million investment round. Another possible IPO is that of CartiHeal Inc., which develops a biocompatible, off-the-shelf coral-based implants for damaged joints. “CartiHeal had a significant development recently,” Schindel said: the company recently published results of an interim analysis of a study, and showed they have a 95% probability of success based on the interim results. Another ripe company, according to Schindel, is Theranica Ltd., which develops electrical nerve stimulation (ENS) technology for controlling migraines. In 2019, the company’s technology was chosen by the Times for its best inventions for 2019 list. “Now sales have started,” Schindel said. In Theranica’s case, aMoon’s timing was especially successful: in March 2019 it participated in a $35 million investment round in the company, two months ahead of the company’s FDA approval. MDClone Ltd., which develops a system for ensuring patient confidentiality during the analysis of medical data, is also an IPO contender. “It is the ultimate big data—all the medical data is real, but the personal details of the patients are fictional so there are no privacy concerns. This enables the creation of giant databases that can be shared between hospitals.”

While Israel is quickly becoming a medtech and healthtech hub, these innovations rarely impact everyday life in the country. “The regulation and openness in Israel need to change,” Schindel said. “We need to be quicker to approve drugs and devices, processes here are outdated and slow, and there is not enough manpower and resources. There are many products that have been approved in the U.S. and Europe but the Israeli regulator does not sign off on them.” aMoon, he said, is part of the 8400 health network initiative, a coalition of 400 leading executives attempting to solve this problem.

Schindel is also working to advance the opening of a local FDA branch in Israel. U.S. Secretary of the Treasury Steven Mnuchin already visited the country in October to discuss the matter, and an FDA delegation is also slated to visit soon. “A local FDA branch will ease the situation for local companies and save on costs,” he said. “Another option currently being considered is that the government change the regulation to enable clinical processes here ahead of the final FDA approval stages.”
Related stories:
Interest in the healthtech sector is not just the purview of hedge funds and medical companies anymore, either. Like Nacht, many of the local tech millionaires—from cyber, fintech, and AI—are turning to the sector. “It is a combination of great economic potential and a desire to help the world,” Schindel said. “They continue to believe in capitalism and technological superiority, but the fact that they can leverage their power for accelerated healing is a game changer. Some think of their parents, their children, themselves. If I can identify and solve problems like Alzheimer's or diabetes early, then it pertains to everyone.” In venture capital, of course, there are successes and there are losing bets. “There are three companies we erased,” Schindel said. “There are also probably a lot of companies we said no to that should have been a big yes. All funds have the anti-portfolio. Bessemer Venture Partners initially asked those ‘two clowns from Google’ what anyone needs another search engine for.” Bets that fail are frustrating, but part of a business, he said.