A Thursday report published by the Israeli Ministry of Health reveals the healthcare gap between Israel’s center and its periphery just keeps growing. The country as a whole is not doing that great, either

TAGS:
Israelis living away from the country’s central urban hubs are severely disadvantaged when it comes to their healthcare options, according to a Thursday report published by the Israeli Ministry of Health. The report, which focuses mainly on 2017 and 2018, shows that rural residents have fewer hospital beds per capita, as well as fewer doctors and nurses. While Israel has a public healthcare system, many rural residents choose to make up for insufficient health services by buying more private insurance, the report found. According to Moshe Bar-Siman-Tov, director-general of the health ministry, the most important conclusion of the report is that the Israeli healthcare system’s biggest problem is inequality. 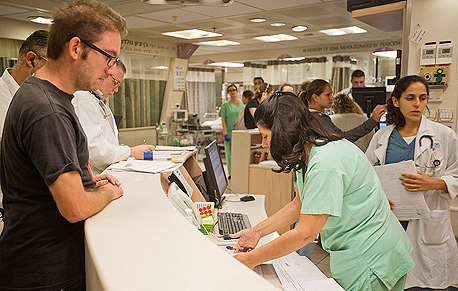 The report also states that the number of beds dropped between 2017 and 2018 in almost all districts, while occupancy went up. The differences are also apparent when it comes to medical staff. Israel’s rural northern and southern districts had 2.1 doctors per 1,000 people in 2017, while Tel Aviv saw 5.3 doctors per the same number of people. Haifa and Jerusalem also fared better than the country’s periphery, with 4 doctors per 1,000 people. Compared with previous years, these numbers show that the disparity keeps getting bigger. In 2012-2014, the Tel Aviv district had 4.4 doctors per 1,000 people, compared to 3 in the southern district. According to the health ministry’s report, the number of doctors per 1,000 people on a national level stood at 3.14 in 2017, a 4% increase from 2010. OECD data, however, paints a different picture. According to the organization’s 2019 health report, Israel is the only western country to see the number of doctors go down since 2000. Regardless, 3.14 per 1,000 people is still below the OECD average of 3.5. Data regarding nursing staff is similar. The number of nurses per 1,000 people in Israel dropped to 5.1 in 2017, far below the OECD average of 8.8. When split into districts, Haifa and Tel Aviv fared slightly better with 6.7 and 6.2, respectively, while the south district only had 3.3 nurses per 1,000 people and the north 4.5. The gaps extend to auxiliary medical staff such as dentists, optometrists, technicians, and community care workers, with 6.8 per 1,000 people in Tel Aviv, 5.1 in the central urban area, 4 in the rural south, and 3.5 in the north. The direct result of the worsening condition of the Israeli healthcare system is the increase in private insurance. According to a study commissioned by the ministry report’s authors, the number of Israelis who acquired some form of private insurance from their health maintenance organization jumped from 51% to 86% between 1999 and 2018. The number of private insurance policies supplied by insurance companies more than doubled in the same period: in the early 2000s, only 24% of Israelis had such a policy, and in 2018, 60% of the population did. While this phenomenon spans all population groups, only 39% of people under the poverty threshold bought private insurance in 2018, compared to 63% of those above it. There is also a gap between Jews and Arabs with an Israeli citizenship—62% compared to 53%.
Related stories:
The report’s findings show that the healthcare system can reduce inequality only partly, Shlomit Avni, the director of the policy planning division in the health ministry’s Administration for Strategic and Economic and one of the report’s authors, told Calcalist. Health is determined by three elements, she said—education, income, and employment. While the health ministry can affect the deployment and accessibility of services, “the game changer is looking at poverty as it pertains to healthcare.” OECD data shows Israel has the highest percentage of overall poverty among western countries, 17.9%, and the second-highest percentage of poor children, just after Turkey. The ministry report supports that—the number of people living with chronic illness is 37% for those under the poverty threshold, compared to 26% above it. Israeli Prime Minister Benjamin Netanyahu likes to toute the Israeli life expectancy, among the highest in the world, as proof of the excellent results of the domestic healthcare system despite the low investment it sees. “First of all, while Israel does have relatively high life expectancy, its global ranking is decreasing,” Avni said. She also suggests looking not at the average but at the upper and lower fringes of the data; when life expectancy is split according to education, she said, there is an eight-year gap between those with higher education and those without.
Buzz