As the country’s supply of hand sanitizers dwindles, leading consumers to complain of rising prices, Israel’s Ministry of Economy stepped in, asking retailers to cap prices

On Sunday, Israel’s Ministry of Economy and Industry announced that the country’s major pharmacy and supermarket chains, including Super-Pharm, Shufersal Ltd., and Rami Levy Hashikma Marketing 2006 Ltd., have agreed to limit the price of alcohol-based hand sanitizer to NIS 9.9 (approximately $2.7) per 100 milliliters.

The announcement came following a public outcry on social media networks last week, as consumers accused stores of taking advantage of the widespread coronavirus (Covid-19) scare to hike the price of the popular product. 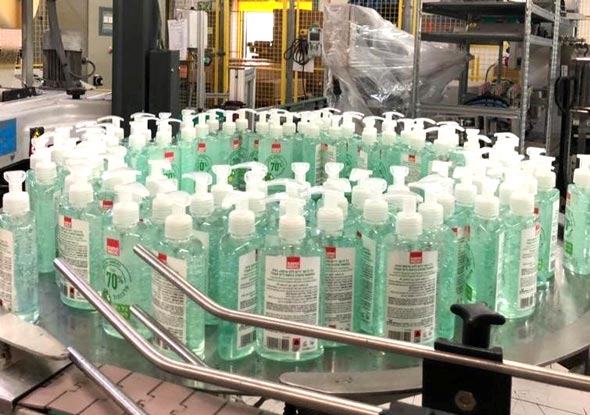 Hand sanitizer. Photo: Tal Shuval
Last week, Super-Pharm, the country’s largest pharmacy chain, claimed, in a Facebook post of its own, that the prices described in many of its critics’ posts were not the result of policy but rather of human error. According to the post, the mistakes were caused by the great pressure Super-Pharm’s employees were under as they struggled to refill the hand sanitizer stock to meet rising demand. Demand is indeed at its peak, as consumers rush to hoard the products they believe could save them from the pandemic, cleaning out the hand sanitizer, bleach, and cleaning products shelves in the process. The empty shelves bring to mind stores in Soviet Russia in the 20th century, Moshe Zilberstein, CEO of Israel’s largest hand sanitizer manufacturer Dr. Fischer (incorporated as Fischer Pharmaceuticals Ltd.), told Calcalist last week. While Dr. Fischer is increasing its hand sanitizer production to meet demand at the cost of its other products, its main competitor, Sano-Bruno's Enterprises Ltd., has started to manufacture the product around the clock instead of just one or two days a month, Sano CEO Yuval Landsberg told Calcalist. According to data provided by Dr. Fischer, hand sanitizer sales jumped 400% year-over-year in February. “It is insanity,” Zilberstein said. The company manufactured 100,000 units in one day and by noon they were all gone, he added. According to Zilberstein, one major chain reported it sold six times the regular amount of hand sanitizers the same day Israeli media reported that of a group of South Korean pilgrims who visited Israel, dozens were diagnosed with coronavirus. While there is no shortage in the product itself and its components, Zilberstein said Dr. Fischer is experiencing a shortage in bottles and caps, slowing down packaging. The same issue was also mentioned by Adam Friedler, CEO of low-cost pharmacy chain Good Pharm Ltd. According to Friedler, in addition to Dr. Fischer and Sano, there are four factories producing unbranded hand sanitizers in Israel. One of the smaller companies recently had to start selling hand sanitizer in tubes, as there are no bottles to be found, Friedler told Calcalist. “Today, I got 2,400 units of hand sanitizers, which are going to reach the stores tomorrow, but we sold 6,000 units in a day, so what good are 2,400 units,” Friedler said. According to him, the shortage is, at least partly, caused by over-regulation, as importing hand sanitizers requires a special permit from Israel’s Ministry of Health. Israelis, however, have more than just the coronavirus to worry about when it comes to sanitation and cleaning. In less than one month, the country’s Jewish majority will mark the holiday of Passover, affectionately known as the cleaning frenzy season. Even in calmer periods of time with no threat of a pandemic, the weeks leading up to the holiday are marked by hundreds of thousands of Israelis raiding the cleaning supplies shelves at supermarkets and stores, in search of products that will make their homes truly sparkle. Now, it appears the coronavirus scare has created a unique shortage in home cleaning supplies, which distributors believe may hamper the cleaning festivities. According to Amos Pam, country manager of the home hygiene department of British multinational consumer goods company Reckitt Benckiser Group PLC, the upcoming shortage is caused by both the excessive consumption of cleaning products due to coronavirus and by cargo ships being delayed at the country’s ports for weeks at a time due to the crisis. More than 20 containers of the company’s products are being held up at the Haifa and Ashdod ports, Pam told Calcalist, and the company is also waiting on 15 additional containers that have yet to leave Europe.
Related stories:

Around Passover, sales of cleaning products are normally three times as high as on a regular month, but some of the supply Reckitt Benckiser brought in for the holiday has already been cleaned out of stores, Pam said.

While it would appear import issues could benefit local producers of cleaning products, as in the case of hand sanitizers, these products also require packaging materials that normally come from outside of Israel, specifically China. “I have a company that can make bleach spray in Israel, but it does not have enough spray caps, so it cannot produce it,” Friedler said.
Buzz