The tourism and airline industries were arguably the first sectors to suffer huge blows due to the coronavirus (Covid-19) crisis. As a result, the technology companies providing services to those industries have also taken dramatic hits. A recent survey by advisory company Innovate Israel has shown that 97.8% of Israeli companies in the travel tech industry reported financial losses due to cancellations by customers. On average, startups in the travel sector saw a 63% drop in income in March.

Innovate Israel surveyed 45 startups out of the 306 members of its travel tech ecosystem. According to the survey, these companies are also cutting their workforce, with 76% of the startups saying that they will employ a smaller number of workers in the first quarter of 2020 compared to the first quarter of 2019. According to Innovate Israel CEO Itai Green, the average number of employees in a travel tech startups fell from 8.6 to 5.2 in recent weeks. 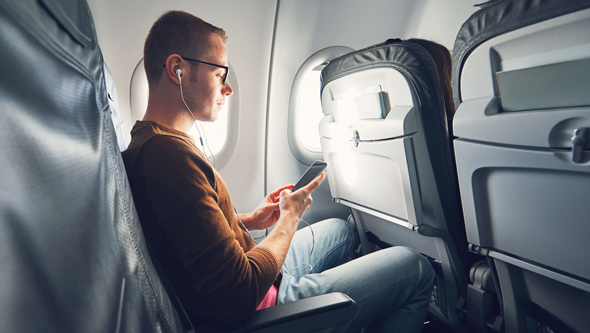 A passenger on a flight (illustration). Photo: Getty Images
The startups also reported an average loss of $387,000 from canceled events and $255,000 from postponed events. The biggest loss reported by a startup was $3.8 million in cancellations and $2 million in postponements. According to the survey, the companies are also extremely unhappy with the support they are currently receiving from the Israeli government, with 96% saying that the government isn't doing enough to help them. Some 64% of the startups said that the best way to help them at this time would be via grants. "I feel from my conversations with these companies that there is some illusion that the tech industry has not suffered a blow in this crisis," Green told Calcalist. "The crisis has hurt the travel tech industry and the survey was meant to illustrate that. Travel tech companies employ around 3,000 people in Israel and a large number of them are in danger of being fired. In other places like Portugal, the country pays employees in order to prevent firings." Eran Shust, co-founder and CEO of Splitty, an online booking platform that allows travelers to compare and reserve hotel rooms, said he has been forced to make cuts due to coronavirus pandemic. "It feels like a disaster movie. You cannot believe this is happening to you," Shust told Calcalist. "We are seeing a drop of 70% to 80% in demand for our services. Initially only in Asia, and then in Europe and now it is everywhere. This is a difficult situation for the company. We have been forced to make cuts. I'm not worried about collapsing, but the most problematic part is the uncertainty that is coming from two fronts. The first is my industry regarding when we will be getting back to work and the other is the lack of support from the government."
Related stories:
Shust added that Splitty entered the crisis with 20 employees and is now forced to fire staff. "I hope we will be able to get back on track soon, but I'm not sure matters will be the same," he said. "domestic travel will become more attractive and hygiene and personal security will be very important after the pandemic ends." Amit Shamni, co-founder and CEO of Bridgify, which uses advanced machine learning and data science capabilities to offer customized trip plans, said his company's four employees have seen their income completely capitulate since the start of the crisis. "I need to pay NIS 80,000 (approximately $22,000)in salaries every month while we basically have no income," he told Calcalist. "Our income plummeted to zero almost overnight. But we must keep our heads high, because if we don’t, we won't be ready when the market recovers."