How Covid-19 Can Save the World’s Bee Population

As many are looking at science to save them from the pandemic, the public’s attitude towards CRISPR technologies is changing, which may prove crucial in helping honeybees worldwide survive the spread of an extremely violent variety of giant hornets

TAGS:
As if 2020 could get any worse, in addition to the suspicious recent rash of Russian doctors falling out of windows there is now news of another potential disaster heading west from Asia: murder hornets, also known as Vespa mandarinia or the Asian giant hornet.

These insects, cartoonishly festooned in orange and black, live up to their intensely predatory notoriety. Growing to an astounding 5 centimeters in length, with a wingspan of 7.5 cm, they are capable of flying more than 30 kilometers per hour. The females also brandish a quarter-inch reusable stinger loaded with a lethal venomous mix of flesh-eating chemicals and a neurotoxin that can lead to cardiac arrest and anaphylactic shock. The very aggressive hornet reportedly kills 30-50 people every year in Japan. 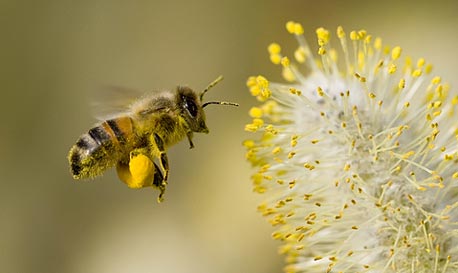 Recently, multiple distinct colonies have emerged in North America’s Pacific Northwest, in both Canada and the U.S. Infamous for decimating Asian honeybee hives by ferociously decapitating the entire colony and feeding off the larvae—scientifically known as the slaughter and occupation phase—this invasive species could mean further bad news for the long-suffering U.S. population of honeybee, which, unlike their Asian cousin, have not learned to defend themselves against natural enemies.

Honeybees are an essential pollinator, supporting billions of dollars in crop production annually, however, the global honeybee population is already reeling from Colony Collapse Disorder (CCD). The phenomenon, which is likely caused by an unknown combination of contagions and loss of habitats, has seen a recurring and disconcerting uptick since 2013. Last year alone, CCD reportedly killed off 40% of U.S. honeybee colonies. With this new hornet threat, there could be further devastating consequences for the honeybee-reliant U.S. food supply, already at risk due to the still-raging coronavirus (Covid-19) pandemic.

Although the tech world has made efforts to help on the CCD front, including a number of Israeli companies employing robotics and artificial intelligence,

now, additional innovations will be necessary to deal with the emerging hornet menace.

Many of the methods currently used in Japan to curb the spread of the hornets are low-tech and generally lacking. One novel way to deal with this new-found aggressor, however, may include employing CRISPR gene drives. Succinctly, the method would use CRISPR technology to introduce and then permanently and irreversibly propagate a mutation determinantal to the murder hornet’s reproduction process, ostensibly wiping out the invasive nests entirely.

The U.S. Department of Defense’s Defense Advanced Research Projects Agency (DARPA) and the Bill and Melinda Gates Foundation have, in the past, floated similar proposals to destroy isolated populations of invasive rodents on islands or to wipe out the malaria-causing Anopheles gambiae mosquitoes. Other organizations have taken aim at the Aedes aegypti mosquito, known for transmitting dengue fever, chikungunya, Zika fever, Mayaro, and yellow fever viruses, collectively causing the deaths of millions of people a year, and making hundreds of millions sick. Most recently, in April, a gene drive system was proposed as a tool that could disarm a devastating wheat pathogen.

Gene drives do not always work, even in optimal lab conditions, because life finds a way, so, employing gene drive systems in the wild comes with its own dangers, including the potential for environmental impacts well beyond the researchers’ initial intentions. For example, some experts fear that gene drive-carrying test organisms might accidentally escape isolated testing areas and be broadly introduced before full testing and analysis can be done.

While there are voices calling for autonomous self-regulation by scientists and other private entities, there are also governmental regulatory systems and risk assessment protocols currently being established to look into these and other gene drive concerns, such as unintended genetic modifications or the unknown effect on ecosystems and food chains. Most recently, representatives from the international Convention on Biological Diversity’s Cartagena Protocols on Biosafety met last month to discuss these issues.

Active regulatory efforts notwithstanding, there will likely be a European-led call for a moratorium on the release of gene drives this October at the 15th meeting of the Conference of Parties (COP15) to the Convention on Biological Diversity, as per the precautionary policy principle, which calls for constant, arguably innovation-impeding, review when dealing with potentially disastrous new developments.

If, however, we reduce our over-reliance on the precautionary principle, we can look forward to additional productive uses for gene drives in enhancing the security and reliability of the food supply chains. These efforts are increasingly necessary as we will likely see future threats to food production as a result of the growing unpredictability and variability of weather due, in part, to climate change. Genetic engineering, either through gene drives or other innovative methods, can help guide and accelerate the process of developing hardy, stress-resilient, fungi resistant and sustainable foods through making crops more adaptable to harsh weather or by allowing seeds to germinate under even suboptimal growing conditions.

Unfortunately, policy ideals, like the precautionary principle, are still being abused, either due to unfounded fears as a result of misinformation—for example, the notion that the novel coronavirus is a laboratory made disaster and a harbinger of what unregulated genetic engineering can cause —or

due to protectionist practices, especially in Europe, arguing for even harsher restrictions on developing genetically modified organisms.

Fortunately, as a growing segment of the population, previously agnostic as to the benefits of scientific endeavors, now looks to science to save it from the pandemic, while even employing CRISPR technologies to fight the virus, we will hopefully see further reduced resistance to genetic innovations, especially when it comes to developments that can save the honeybee population.

In addition to our concern for honey production or our food supply, we should care about the continued existence of bees in general as we can also learn a lot from apiculture. Like us, bees are social creatures that, living in crowded conditions, have learned to rely on good hygienic practices to keep deadly viruses at bay. Last month, researchers studying the deadly (to bees) Israeli acute paralysis virus (IAPV) reported using AI cameras to track how healthy bees avoided their sick brethren, even as the socially irresponsible sick bees themselves actively neglected to socially distance.

And, just like those bees that were examined, we humans will likely also see a huge invasion of privacy as governments aim their AI-enabled cameras on their own citizens to track social distancing compliance. Bees, at least, do not single out Jews or other minority groups or physically hit each other when they fail to comply.