This Shavuot, Have Another Slice of Grasshopper Cheesecake or Be Brave Enough to Try a Real Insect

With awareness to the damages of the global meat industry on the rise, there is no time like the present to examine the green (and kosher) alternative to bovine meat, that has been there all along: grasshopper

In Israel, the Jewish harvest holiday of Shavuot, also known as Pentecost, which is celebrated this week. is dominated by cheese and cheesecake. But this year, even observant Jews, separating dairy and meat products, might want to consider adding some novel parve grasshopper meat to their dairy spread.

Long eaten by Yemenite Jews and a handful of others that have overcome the visceral yuck factor, the popular perception of grasshoppers as a source of protein may finally be changing. Global warming has put a spotlight on the detrimental effects of humongous bovine herds that belch tons of methane—a greenhouse gas associated with global warming —daily into the atmosphere to sustain our insatiable hamburger habits ostensibly driven by the unrelenting growth of the $650 billion fast-food industry. 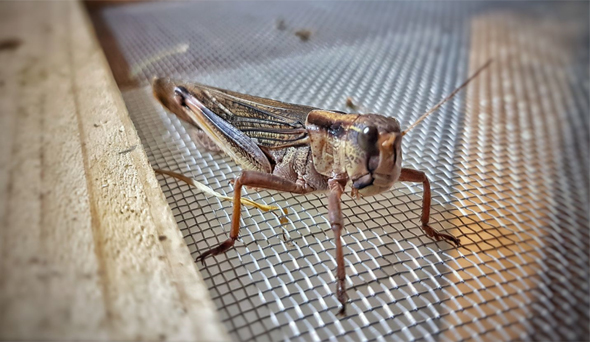 A grasshopper raised for human consumption. Photo: hargol.com
Companies like Impossible Foods Inc., the Redwood City, California-headquartered company founded by a Stanford professor intent on eliminating factory farming, have looked to plant-based solutions to help satiate our need for quick and easy protein. Others, such as Israeli company Hargol Foodtech Ltd., have looked to insects. Hargol recently released its novel brand of grasshopper protein bars, under the brand name Biblical Protein.

Notably, the United Nations’ Food and Agriculture Organization (FAO) has been a longstanding supporter of cultivating insects as an alternative source of protein. However, introducing new protein sources, even from resources that have been around for a long time, like bugs, requires compliance with sometimes onerous regulatory oversight.

For example, the European Union (EU), which is infamously terrified of genetically modified (GMO) food products, has a special set of new regulations for novel foods. As per the EU rules, novel foods are defined as "food that had not been consumed to a significant degree by humans in the EU before May 15, 1997." Insects clearly fall under this legal definition.

The novel food regulatory process is also designed to allow foods that are otherwise eaten in other countries, for example, traditional foods, like grasshopper, to be brought into the EU. Currently, the process is notoriously long and expensive, and, to date, only four traditional foods have been authorized since the law's inception in 2018.

As of last month, however, it was reported that the European Food Safety Authority (EFSA) was set to rule on allowing insect-based foods such as those containing parts of or whole mealworms, locusts, crickets, and grasshoppers to be readily available across the continent by the fall of 2020.

The U.S.’ insect food industry has been even more stifled, heretofore lacking any standard system for regulating insects as food. Allegedly, it has focused more on their negative aspects, regulating, for example, insect parts in food as filth—and not on their potential as edible foods via certified Good Manufacturing Practices (cGMP).

Until such time as entomophagy becomes mainstream, the aforementioned fast food industry is at least trying to do its part in dealing with the coronavirus (Covid-19) pandemic. Burger King, for example, recently announced it would be including extra onions in its Whoppers in Italy in the hope that the resulting bad breath will provide that needed extra impetus for keeping social distancing guidelines.

Edible insects, like other technologies and ideas that have long sat at the cusp of broad social acceptance, may have found their opportunity to go mainstream during the current crisis. There is a growing push to use the global pandemic as an opportunity to reset some of our bad habits and help promote wallflower notions, including telemedicine, distance learning, and even universal basic income.

The World Economic Forum (WEF), for example, sees the crisis as an occasion to "to redesign a sustainable, inclusive economy, revitalizing industry, preserving vital biodiversity systems and tackling climate change." Effectively, the WEF sees this as an opportunity to push through the European Green New Deal that was proposed just prior to the first reports of the pandemic in December.

Under this agenda, Europe's "greener, more resilient and inclusive future" would find the use of alternative, affordable, and clean protein sources to be especially appealing.

But not everything at the end of the pandemic will be green. NASA's iconic pumpkin-colored flight suits will be replaced this week with Hollywood-designed, retro white suits that will be worn by the first two astronauts to arrive at the International Space Station (ISS) on a private rocket. The suits’ design has already proven its mettle in two previous launches with Starman on Elon Musk's orbiting Tesla and Ripley, the female test dummy, in an early test of the Dragon Crew capsule.

Many look forward to seeing NASA's real human astronauts, Bob Behnken and Doug Hurley, arrive at the ISS via SpaceX's Crew Dragon capsule, bedecked in their new white suits on their historic mission, if all goes well, just as Shavuot starts on Thursday.

Behnken and Hurley however, won’t be the only ones who will have the opportunity to experience Shavuot in space. Late last week, Japan’s space agency JAXA, in conjunction with Japanese robotics startup GITAI Inc. reportedly sent a telepresence robot, effectively a space avatar or robonaut, to the ISS. This device will allow select earth-bound individuals to begin to appreciate what it is like to spend time on the ISS, and is designed, ironically, just as we are introducing new ways to launch humans outside of earth, to reduce our reliance on a human presence in space.

Behnken and Hurley also won't be the only people wearing white this weekend. While Americans already traditionally started wearing white as part of their formal attire on Memorial Day, this past Monday, many Israelis will likely be festooned in their whites this coming Shavuot, while enjoying the holiday’s white night (all-nighter) learning events.

Although NASA, which consideredincorporating insects (as of 1947, the first animals in space) into its space-cuisine as far back as 1981, will likely not be feeding its new ISS guests any grasshoppers this Shavuot, maybe people down here on earth might be bold enough to do so. And, if you still cannot stomach the real deal, at least enjoy the long-standing Shavuot staple, the green-hued grasshopper cheesecake.